Attention Guerrero: You Are Responsible As UCLA Stands By While Pac-12 Belittles Bruins

Share All sharing options for: Attention Guerrero: You Are Responsible As UCLA Stands By While Pac-12 Belittles Bruins

The Pac-12 continues to march forward. Maybe it will be the Pac-16 before long, but for now it is a 12-team league taking pride in its recent expansion, as it should. It's growth has not just been in number of teams, but also in incredible surge in forward-thinking, exposure and money. All of that has been talked through at length. Simply put, the conference is moving forward and for the first time ever, it is marketing itself.

Marketing itself is good. It's an amazing change and it is marketing its rivalries. It should! It's something that makes the conference unique. Every team has a bitter rival (except for the two newbies, but maybe that will develop). Arguably the most bitter and if not the most bitter then certainly the most high profile is the UCLA/ SC rivalry, which the conference pushed in this video. Check out the clip at the 0:54 mark [Screenshot captured below]: 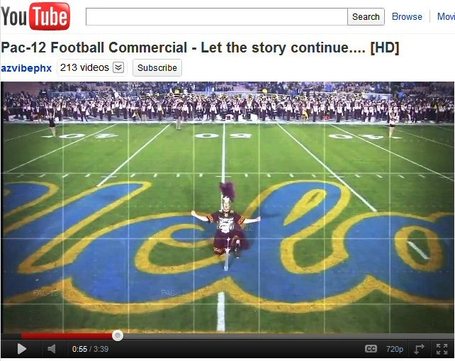 Look familiar? It should because it's been happened every other year for years now. That Trojan walks to midfield of the Rose Bowl and stick a sword in the turf right on the UCLA logo. Now the rest of the country is seeing this and how do you think it looks for the Bruins? What are people thinking when they see that sword of our rival going through our logo? Going back to our discussions on the topic before, how upsetting is it to us Bruins?

Now the Pac-12 is pushing this image. It is upsetting. You can divert some of your anger at Larry Scott and the Pac-12. They are allowing one of their big moneymakers to be perceived as weak. It's not a wrong perception, though. It's absolutely true. Right now we are weak and it starts with those in charge and that is where the bulk of the anger should be aimed.

Hey, Dan, you look awfully weak right now. You look awfully misguided and out of touch with your fan base. You look like an buffoon and when you look like a buffoon, you allow your university to look inept. Every time another pair of eyes sees that sword going through your logo, that logo means that much less and the school looks that much weaker. Want to do something about it and stop this embarrassment or are you going to continue humming your way to Indianapolis?