Sometimes a simple tweet tells us what we all need to know. Last night Anthony Stover posted such a tweet that gives us a little idea of how Ben Howland has lost his team. Here it is:

The full screen grab is after the jump.

Here is the full screengrab: 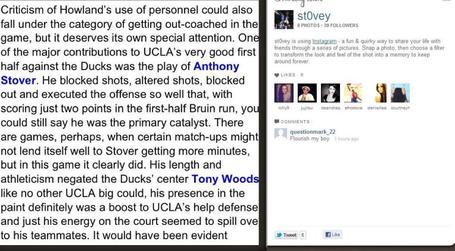 That paragraph was cropped from Tracy Pierson's game review on BruinReportOnline.com.

This is the state of our pathetic basketball program. It is a joke where even the most loyal players are putting their arms up (online) about their head coach who seems to have lost all his touch.

It's time for a change in Westwood. However, we are going to have to start with removal Chianti Dan first. It's Chianti Dan who needs to go first so that we can have a competent AD who can replace the current lame duck coach in charge of UCLA hoops.

UPDATE (N): Stover being the classy individual he is put up a followup tweet noting that he thought the articled discussed him "in a positive way" and that was his reason for posting. He added that he "had no intent on bashing coaches or ucla." Whether he intended it or not though his tweet only highlighted the criticisms of Howland's mismanagement of the basketball personnel, which has resulted in what is shaping up to be the second disastrous and unacceptable season in last three years. GO BRUINS.