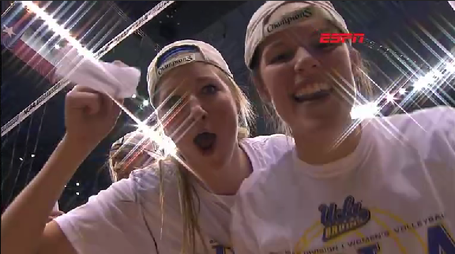 With the Winter Quarter underway in Westood and the NCAA's Spring sports getting ready to start up, this seems like a good time to take a little look back at the Bruins that competed in the various early-year sports. The big news out of the Fall was of course the Women's Volleyball team bringing home championship #108, but there were plenty of student-athletes wearing the blue and gold over the course of last Fall. Here's a little look at how their teams ended up.

Men's Soccer. Coming into the fall 2011 season, there were some questions surrounding the soccer program and head coach Jorge Salcedo, due in part to the team's seeming underachievment in recent seasons, particularly in tournament play. An 0-2-1 start to the year, including a loss at UC Davis did little to inspire confidence. The Bruins came back to Westwood after Labor Day and win a pair of 2-1 matches, and kept on winning - losing only 2 more matches in the regular season and going undefeated in conference play. UCLA entered the NCAA Tournament ranked #13, hosting its first 2 games, victories over Delaware and Rutgers before traveling to Louisville for the semifinal, where the Bruins won in double-OT to advance to the College Cup. While the Bruins fell to North Carolina on penalty kicks in the national semifinal, the squad featured 3 All-Americans: Chandler Hoffman, Kelyn Rowe and Brian Rowe. Kelyn was also named Pac-12 Player of the Year, while Hoffman and Brian Rowe were also named first team All Pac-12.

A number of Bruins from this squad are now headed to the MLS, with Kelyn Rowe and Chandler Hoffman capping off their outstanding personal seasons having been selected by the MLS's Generation Adiddas program and an early exit from Westwood to begin their pro careers. They were both taken with 1st round selections in the MLS Superdraft - Rowe going at #3 to New England as UCLA's highest MLS draft pick since 2008 and Hoffman going to Philadelphia with the #13 selection. Andy Rose, Shawn Singh, Eder Arreola and Brian Rowe later joined Hoffman and the other Rowe as MLS draft selections. In addition, Kelyn was called up to the U-23 (US - under age 23) National Team just before the draft. The U-23's will make up nearly all of this summer's US Olympic Soccer team, so keep an eye out.

Women's Soccer. It looked so good for the squad heading into the postseason, until it all ended with just a couple of penalty kicks... The regular season was kind to the Bruins, losing just one match (at Stanford) and drawing three other away matches. After a decisive 5-2 thrashing of Southern Cal, UCLA entered the NCAA tournament with the #2 overall seed, and the advantage of hosting its matches in the first 3 rounds of the Tournament. Sadly, the team did not even get to fully redeem that gift, as after pulling out a 1-0 win over New Mexico (while playing a number of freshmen) the team fell to San Diego on penalty kicks. As Bellerophon noted after the match, the Bruins controlled possession and massively outshot USD, but could not find the back of the net. In the true spirit of Chianti Dan's leadership of Morgan Center, the official site treats the result as a tie that does not threaten the program's home unbeaten streak.

Despite the disappointing end to the season, the Bruins were well represented in the list of postseason honors. Sydney Leroux was named a first team All-American by the NSCAA, while Abby Dahlkemper became the 2nd Bruin freshman (after Lauren Cheney) to earn All-America honors, having been named to the third-team at defender. Leroux earned similar accolades from Soccer America, while Samantha Mewis joined Dahlkemper on the All-Freshman team. Sydney has entered the new year on a roll, becoming the #1 overall pick in the Women's pro soccer league, and was named Young Female Athlete of the Year by US Soccer while Dahlkemper, Mewis and Sarah Killion were called up to the Under-20 National Team.

Men's Water Polo. Thanks to a mid-late season stretch where the team went more than a month without dropping a match, the Bruins held the #1 national ranking heading into the final weekend of the regular season, but entered the postseason as the 3 seed in the MPSF tournament, held at UCLA. UCLA went on to win the conference's tournament, winning all 3 matches in overtime, including a win over Southern Cal in the championship game to clinch a spot in the NCAA Tournament. The Bruins routed UC San Diego in the semifinals before losing a heartbreaking rematch with the Trojans in the national championship match in Berkeley. Head Coach Adam Wright was named the conference coach of the year, and 7 Bruin athletes were named to the All-MPSF teams - Cullen Hennessy, Matt Rapacz, Josh Samuels and Griffin White leading the way as second team selections (no Bruins on the first team). Overall, the team's 24 wins were the most recorded since the 2004 season.

Cross Country. The UCLA cross country squads came out of the gates strong last fall, with the men's team winning the first two meets of the season, at Nevada and San Diego State, and finishing 2nd at Stanford's invitational. The women also saw a solid begining to 2011 with 2nd place finishes at the Nevada and San Diego invitationals, and 9th at Stanford. The remaining meets of the regular season were not so favorable for the Bruin teams: while the men did finish in the top-15 in their remaining meets at Wisconsin, Notre Dame and Santa Clara, 15th was the best finsh for the women in that stretch, before closing the regular season with a 2nd place result at Cal State Fullerton. The men's team entered the Pac-12 Championships ranked #20 nationally, and finished the meet in 4th place while the women placed 10th in the capstone to conference competition. The competitive season for both squads ended at the NCAA West Regional at Stanford, where the men finished 6th in region, and the women in 18th place. The two lead runners on the men's side - Kent Morikawa and Nohe Lema - were named to the USTF All-West region team. Morikawa was also named 2nd team All Pac-12, and 7 Bruin runners earned Pac-12 All-Academic team honors.

Women's Volleyball. Last, but certainly not least is this 2011 National Champion Bruin squad. After finishing the regular season with a 24-6 record, the team entered the NCAA tournament as the #9 seed and hosting the first two rounds at the Wooden Center. The Bruins knocked off Maryland-Eastern Shore and San Diego, and then traveled to Lexington Ky for the Round of 16 - beating Penn State 3 games to 0 - and Texas in the Regional Final to advance to the Final Four. UCLA went on to beat Florida State in the semifinals, and defeated Illinois in the championship match at the Alamodome. Rachael Kidder was named a 1st team All-American off the Bruin team, and has one more year of eligibility remaining to help her team reopen Pauley in style. Head Coach Michael Sealy was named national coach of the year to go along with the national title in just his second year in Westwood. Per the official site, the championship is among the nominees for LA's top sports moment of 2011 (online voting here).