Share All sharing options for: BN 2011 Pac-12 Football Predictions: How Did We Do?

Since the 2012 Pac-12 schedule has been released, I thought it would be a good time to revisit the BN predictions that we laid out prior to the season, and see how we did.

Remember, these were predictions, and not expectations, and I just took the average of the predicted wins and losses.

Here are the results: 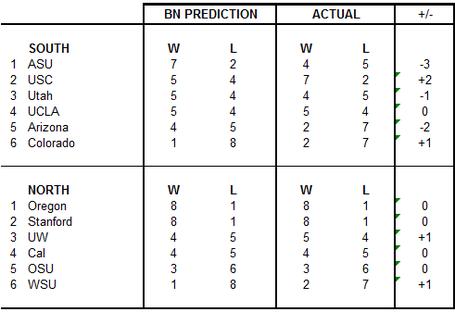 So waddaya think? Not bad, eh? More after the jump.

Not surprisingly, the South division was a mess, and we didn't do so well there. Arizona and ASU imploded, while U$C did better than expected (and played so well that even we had to give them kudos...even though we vomitted right after). But you can see that as a group, we had UCLA figured out pretty well. I think we all expected at least one more OOC victory, and certainly no blowout losses. Too bad so sad.

The North was much easier to figure out and it played out that way as a 2-horse race.

Next year's predictions will be a bit more difficult, especially in the South Division once again, which will have 3 teams with new coaches, while the North will have one team with a new coach. In any case, it is way too early to make any sort of prediction, especially before spring camp, so let's wait at least to see how things shape up there.

The clear expectation however is that UCLA should win 8-9 regular season games next year. We will have 7 home games, more experience, a deep offensive line, and quite a bit of talent. Yes, it will be a new coaching staff...but the "coaching effect" should be positive. I'll let the guys at College Football Matrix fill you in (written before RN was fired):

Over the last 4 years, no one in the Pac10 now 12, has a worse net game effect than Coach Neuheisel. -4 games per year in a 12 game season is one of the worst marks in the country for coaches still employed.

In short, I hope Coach Mora hits the ground running. There is little margin for error, in our eyes.