Picture of renovated Pauley indicates that UCLA’s incompetent athletic department may be getting rid of the famous center court logo from John and Nell Wooden Court.

First, for a refresher watch this video:

That legendary center court logo - which Dan Guerrero and his incompetent staff somehow had lost track of - apparently may be gone from the new Pauley. Remember Guerrero and his staff had no idea what happened to one of the last replicas. That embarrassing bit of news came out in March. But we'd all assumed that we'd have that center court logo in the renovated Pauley.

We assumed they would replace it with a new replica. RThe last floor in the old Pauley was a replica. They sold off the John Wooden floor long ago, they broke it up into small pieces and encased them in lucite and gave them to big donors. And it wasn't an issue, because they got a better floor. But when the more recent center circle was sold, we assumed they would replace it with another replica. It'd be unthinkable to have a John and Nell Wooden Court inside new Pauley without that legendary center court logo.

Well that is exactly what appears to be happening inside new Pauley. Here is another shot courtesy of Howard Fromberg: 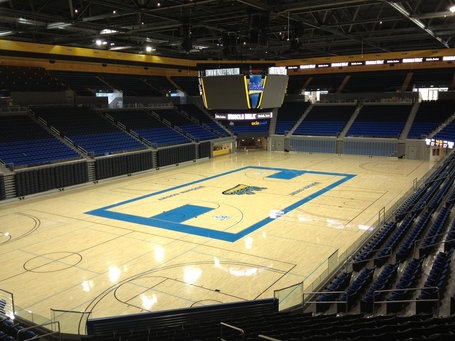 If someone has a better image of the new Pauley, we'd be happy to replace. But it sure looks like Morgan Center is replacing the iconic "UCLA circle" which became integral part of Coach Wooden program's identity with a generic script UCLA logo. It looks awkward and out of place at the center court of what is supposed to be the Yankee Stadium of college basketball.

You'd think we are being led by an incompetent Athletic Director who gets his operational advice from an Arizona alum who appears to have no respect for the traditions of UCLA basketball. Wait, that is exactly what we have at Morgan Center where the worst AD in college sports uses an Arizona alum as his right hand man.

If that logo is not back on the center court of new Pauley, this renovation would be a bigger joke than we all imagined.

UPDATE (N): Previously this post had a link to Chris Foster's tweet with shot of inside of new Pauley. One of our readers kindly sent shots which we can use. So took out Foster's tweet as we rather not give that LAT beat reporter traffic or attention to his twitter account.

Getting Ready for Opening of "New" Pauley: Videos, News and Notes Roundup