Share All sharing options for: Confusion Grows Around the Placement of the Iconic Center Court “UCLA Circle” in New Pauley

With two weeks left until the opening night it appears there is no clear information on whether Morgan Center is keeping the iconic center court "UCLA Circle" in the new Pauley. After we saw pictures of arena on Friday we have seen pictures that a replica of the circle may be moved to the floor of the team store (which would be tacky to say the least).

However, as pointed out by uclaluv on the official site's "Pauley Pavilion Central" page there are two graphics that show the center court circle to remain where it should belong: 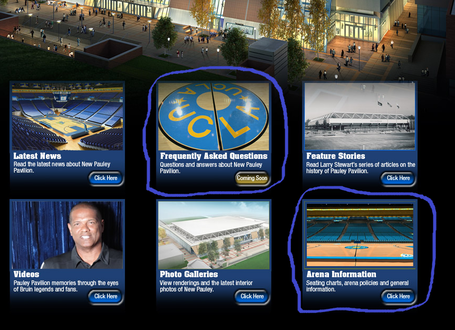 So what is exactly going on? No one seems to know. We now have pictures of a new Pauley with a tacky center court logo that looks like as if someone placed a giant refrigerator sticker and yet we have the Pauley page on official site showing the logo may remain where it belongs.

BTW note with just two weeks left until the opening of the renovated gym, the athletic department is still working on FAQs (lol). Anyway, the confusion around this is not surprising at all. It is par for the course of Chianti Dan's stumbling, bumbling athletic department, which would probably screw up making a cup of coffee.

Embarrassing incompetence all the way around. Yet Guerrero is still laughing all the way to bank, pocketing almost a million dollar salary per year.