UCLA is coming off its biggest road win in more than a decade. The Bruins at 6-2 (3-2 in conference) are ranked number 25 in the country. We are going to be playing in probably the most important game at the Rose Bowl since the Cade years against another hot Pac-12 team which is coming off a massive win and also have realistic shot at going to the conference championship game.

To add to all of this - Saturday happens to be our home coming weekend. It is also parent's weekend. We can certainly sense the buzz here on BruinsNation in our posts and in the comment threads. One would think the folks at UCLA athletics would take advantage of this excitement and go all out to promote this game on campus and make sure there is a packed house at the Rose Bowl.

So what are they doing this week to promote this game on campus and encourage student turnout? THIS: 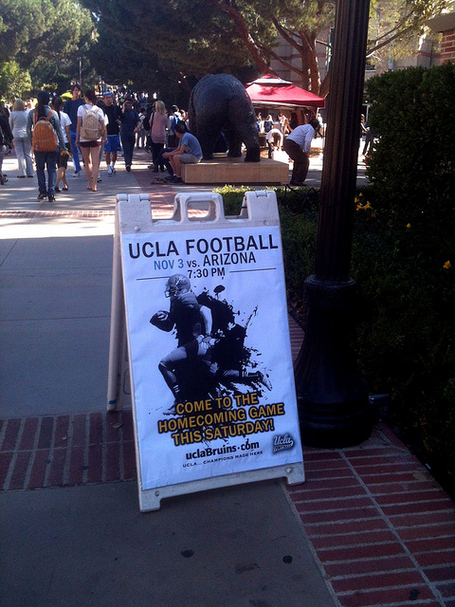 Yes, that is Morgan Center's way of promoting this game to our students. Sandwich boards.

As far as we know there has been no effort by Dan Guerrero and his worthless staff to promote this game and encourage student turnout by doing outreach to the dorms.

There has been no outreach to students through way of special, professionally done huge banners at key entrances to Westwood Plaza or other prominent parts of campus. We have not seen any evidence of UCLA rolling out online videos, advertisements to get students jacked up for Saturday's game.

Oh I am sure Danny is going to email us his worthless piece of cr*p blogpost tonight to tell us how excited he is about next Saturday while also taking credit for last Saturday's win. But as of now we have nothing real from our incompetent AD to get our students and alums fired up and turn out in huge numbers for Saturday.

All we have is bunch of lame card boards on Bruin Walk. Maybe it is too much for Chianti to work up (lame) promotions around Pauley's opening madness and promote the biggest UCLA football game in years.