Share All sharing options for: Botched Rollout: Guerrero Emails About Alternate “LA Nights” Unis For The Arizona Game (Not Stanford)

So, first word came out via our student store that UCLA was going to roll out alternate "LA Night" uniforms for the Stanford game. Then Morgan Center denied it. Then no one knew what was really going on for a while. Then all on a sudden today we get the "word" via Chianti's weekly email that the Bruins are going to be in these unis for the Arizona game: 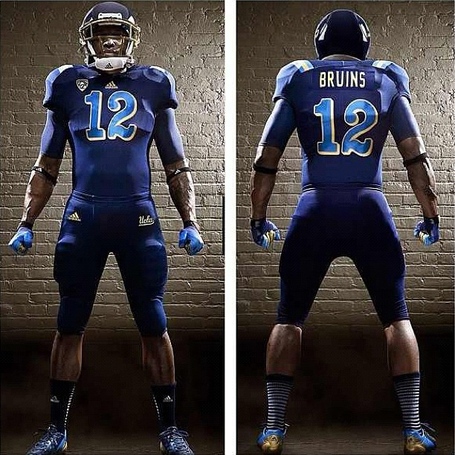 Here is a blurry view of the helmet courtesy of Simon Goines.

I have to say while I am a traditionalist about these unis I kind of like them. I find them kind of cool. Other folks may disagree which is cool. Here is a poll (on the frontpage) if folks want to vote on it.

But what is mindboggling is how badly UCLA has screwed up the roll out and once again failed to take advantage of an opportunity to optimize the excitement of a fanbase that's buzzing about the football program. Dan Guerrero's incompetent staff wrote up this:

As a Bruin for life, I strongly value UCLA's traditions, but alternate uniforms in non-traditional colors represent a 21st century trend that, when done tastefully, synchronizes the familiar with the fresh.

I should note that Coach Mora loves our standard home uniform, so you can count on us continuing to sport our familiar look with only the occasional alternate.

Words are not adequate to describe how insincere and pathetic that paragraph is. Guerrero has a lot of chutzpah bragging about valuing "UCLA's traditions" and talking up our "standard home uniform" even though it was his incompetent athletic department that screwed up the most glorious home uniforms in college football.

Anyway, as I mentioned above that many of us kind of dig these alternate jerseys. But what is disappointing is that because of Guerrero and his staff's incompetence we are not sure how many folks will care about it. There has been ZERO pathetic promotion of our big game this weekend on campus. Here is a video of how Arizona promoted it's game before the SC game last weekend

Yes, that's how a professional athletic department promotes a big game on campus. We get sandwich boards.

We have seen no multimedia roll out promoting our game or these unis or anything about our super star senior running back, who is about to become the all-time leading rusher in the history of UCLA football.

We have become mostly numb to the surreal incompetence of this athletic director who seems to have no clue about the game, about our school's traditions or have a grasp on basic strategies on how to communicate with his most loyal constituencies. Yet time after time he reaches a new low that leaves us wondering in what world the school's chancellor can justify paying this guy almost a million dollars a year, only to embarrass those four letters time and time again.