U.C.L.A stands no chance winning against strong opponents if the Special Teams Unit continues with the play we’ve seen thus far. Good opponents will capitalize on our mistakes; elite teams will bury us.

Special teams are an often overlooked but very important part of football. For the NFL t’s been argued that a football team’s total quality is three parts offense, three parts defense, and one part special teams. In college, and specifically for U.C.L.A., I’d suspect that special teams carry a little more weight due to the inconsistency of their performance and talent disparity between personnel.

We’ve been blessed with some amazing kickers (Kluwe, Medlock, Perez, Forbath, Locke), and I have no doubt Fairbairn will continue in that vein as he continues to mature. However, our other components of special teams, particularly the punt return team, are a bit more suspect. Given the consternation special teams has caused this season (of late, Manfro’s muffed punt returns, or Man-muffs), I thought it appropriate to look at the efficiency of that particular unit.

Below is U.C.L.A.’s Special Teams Efficiency (STE), a composite measure of our Field Goal, Punt Return, Kickoff Return, Punt and Kickoff efficiency, measured in points per game. As a reminder, these efficiency ratings, which were created by Brian Fremeau, look solely at a team’s results on the field and how proficient it has been so far.

It answers the question of how successful our offense, defense and special teams play has been toward our main goal of maximizing our scoring opportunities while limiting our opponents’ scoring opportunities (i.e., are we scoring when we should given our field position and the strength of our opponent, and are we holding other teams from scoring given their field position and strength).

As jaybru77 brought up last week, this analysis ignores causation (injuries, personnel issues, coaching decisions, etc.) and focuses only on our play on the field.

This is a pretty damning illustration. U.C.L.A. is currently ranked #100 out of 124 total FBS teams in special teams efficiency (Oregon is ranked 4th, Colorado 121st). The special teams unit must improve for U.C.L.A. to become a consistent contender; we stand no chance winning against strong opponents if we continue with the play we’ve seen. Good opponents will capitalize on our mistakes; elite teams will bury us.

Drilling down to the components that make up the composite STE we clearly see our issue(s): 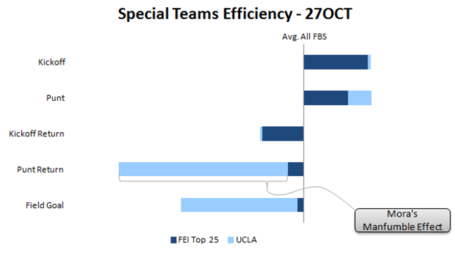 Note that this is the Overall FEI Top 25 – the disparity would be much larger if we were to compare U.C.L.A. to the STE Top 25.

I’m sure nobody is surprised by our high kickoff and punt efficiency measures (thank you very much, Mr. Locke), but the gap in punt return efficiency is absolutely atrocious. We're currently ranked 122 in the nation in punt return efficiency, above only Illinois and Houston. We probably all cringe now when our opposition punts. The good news is that this shouldn’t be too hard to remedy; even sticking somebody like Embree back there would go a long way to mitigating this liability.

If the coaches feel Manfro is that potent of a weapon, spend some time actually coaching him to not turn around or take multiple steps backwards when fielding a punt. Then, start to work him back in if and when games allow.

Field goal efficiency isn’t great either, but we all know the story behind our freshman kicker and I’d venture to guess this isn’t a stat most are too worried about – Ka’imi is showing steady progress and is slowly becoming an asset Coach Mora won’t hesitate to rely on (though hopefully we’re so thoroughly dominating our opponents going forward that Mora won’t have to rely on Ka’imi too much, as opposed to CRN bringing out the field goal unit anytime we crossed the 50).

GOING FORWARD
Here’s an updated look through October 27 of how our past and remaining opponents: 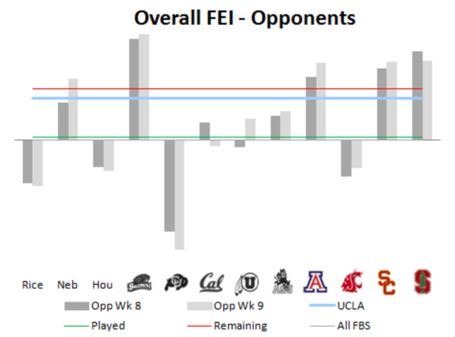 I’m optimistic about our remaining games. I was impressed that we didn’t crumble in Tempe after falling down two TDs early, and was doubly impressed with our last minute drive down the field to set up Fairbairn in the middle of the field (he’s had some problems from the hash marks) for his game winning FG.

Additionally, the FEI has been incrementally giving us love over the past few weeks, now predicting that we’ll win 1.9 of our remaining games (up from what would now be 1.2 as of last week). This would put us at 8-4, and I believe meeting frontpager expectations if that record includes a win over $c.

When taken as a group our past opponents are still only just better than the average FBS team (green line vs. grey line). Ratings-wise, five teams we’ve beat are in the bottom half of all FBS teams (ouch, that loss to Cal is looking very bad). All of our remaining opponents, save Stanford, have improved over last week; even WSU is getting better. The good news is that we’ve improved as well, and at a greater percentage than our remaining competition (although most are still ranked higher than us).

Put another way, the SOS of teams we’ve played to date ranks us 66th out of 124 FBS teams. Compare this to Arizona, whose past SOS is ranked 7th. Our remaining SOS is ranked 30th (see table below).

As much as we may be looking forward to what this season has the potential to be, the reality is that we still have some very tough games ahead of us. U.C.L.A. cannot afford to look past Arizona, especially since we’re on a five game losing streak to the ‘Cats. That’s right, go all the way back to 2006, Patrick Cowan, Justin Medlock and ATV’s 89 yard pick-6 for our last W:

I used ranks rather than ratings in the table as I thought that was easier to look at. If anybody is geeking out for some more numbers I can certainly drop in the efficiency ratings.

U.C.L.A’s offense vs. Arizona’s Defense
U.C.L.A’s offense actually matches up pretty well against the ‘Cats. We should be able to put up points on Arizona’s defense, which is worse than ASU’s and is actually on par with Houston’s. As long as Mazzone doesn’t try to get too cute with the play calling and actually sticks with what is working (give Franklin the ball!) we should be tough to stop. The problem though is when we’re on D. Putting up points won’t matter much if we can’t slow down Arizona’s high-powered offense.

U.C.L.A’s defense vs. Arizona’s offense
Offensively, this will be by far the best (most efficient) offense we’ll have played to date. Arizona has put up an average of ~44 points per game since the Ducks shut them out late-September. Couple that with us giving up over 500 yards of offense to an ASU team whose offensive efficiency is ranked 31st (compared to Arizona’s 2nd place rank) and you can see the severity of the situation. Looking at the rankings I'm worried about having to start deep in our own territory (i.e., losing the field position battle) and Arizona putting up big plays on us (look at the disparity in the explosive drive ranking).

Special Teams
Do I really even need to say anything? We know our kicking is solid. At this point we just need to make a personnel change on our return teams and, Boom, 1/7 of our team's total quality is fixed.

VERDICT?
In the end I’m hoping for a competitive game that doesn’t result in an on-field brawl. Looking solely at the FEI, the edge goes to Arizona. However, this will only be Arizona’s third road game, and they dropped their previous two (let's not consider that those were against Oregon and Stanford). In honor of Lucas’ $4B sell-out I’ll end with a quote from everyone's favorite scoundrel:

Never tell me the odds