It took less than 24 hours for Jim Mora to roll out the "inexperience" excuse following UCLA's meltdown in Berkeley. He also offers disturbing comments about Bruins losing focus in a stadium with thousands of empty seats and sounds in denial about penalty issues plaguing the team in first half of the season.

Well, it didn't take long for Jim Mora to roll out BS "young" excuse. From his Sunday evening tele-conference:

Our guys played extremely hard, as hard as I've seen them play in any of our six games, but we weren't able to overcome mistakes that we made. Some of those were due to Cal outperforming us or putting pressure on ue or having a better call up for their players. Some of them were due to inexperience and youth. I haven't said this to you guys at all and I don't like to, but we're an extraordinarily young football team, especially on offense. We got in an environment last night that was difficult for us. When we got behind and they were able to pin their ears back and come after our quarterback we had trouble stemming that tide. We really did. They made us a little bit one-dimensional that we'd like to be.

Actually, it was your offensive coordinator coach that made our team one-dimensinonal, somehow forgetting at times we have one of the best running backs of the West Coast playing in the Bruin uniform. But that's beside the point. There are lot of other non-sense packed in Mora's excuses. Let's go through them.

First, about that "young" excuse. Let me excerpt the breakdown of our penalties, IE Angel just put together in his brutal "eye test" post assessing the ugliness from Saturday night:

1. Datone Jones offsides on a 2nd and 3 to give Cal a first down. Jumped the hard count. Maynard did a good job with that all game.

2. Aaron Hester personal foul to give Cal a first down after a 3 yard pass where he and Sheldon Price decided to throw Treggs on the ground four yards out of bounds. Led to a field goal after a big stop near the goal line.

3. False start by Jake Brendel. Most confusing penalty in football to me is a center false starting. They control when the play starts. Just makes no sense. This turned a 2nd and 3 into a 2nd and 8.

4. Personal foul on Shaq Evans after he decided to punch a Cal corner in the face-mask. This negated a 5 yard catch by Jerry Johnson on the opposite side of the field and turned another 2nd and 3 into a 2nd and 18. The third and fourth penalties happened on the same drive in the first quarter. Really promising drive turned into a punt.

5. Aaron Hester checks in again with a holding call on a punt that was fair caught by Damien Thigpen. Made a drive start at the Cal 15 instead of the 25.

6. Offsides by UCLA's defense on the 4 yard line of Cal. It was a linebacker jumping on the hard count by Maynard while trying to blitz up the middle. I think it was Eric Kendricks, someone in the game thread thought it was Ryan Hofmeister. I'm not sure. It wasn't that costly because it was a two yard penalty and Cal would have scored a TD regardless with the way UCLA's DBs covered in the redzone.

7. Substitution infraction by UCLA's offense. 12 men on the field. Penalty is completely on the coaches. Turned a 3rd and 7 into a 3rd and 12. This was followed by a botched deep ball to Devin Fuller (I'll get into his appearance later) instead of trying to pick up some yards underneath with something like a hand-off to Franklin and make the FG try within 40 yards for Fairbairn. instead our freshman kicker who is reliable within 40 yards, missed a 46 yard try by hooking it about 5 yards too soon. Penalty probably cost UCLA points at a point where points made a difference in the outcome.

8 (not penalized). Aaron Hester got called for another holding penalty on the punt return fumble by Steven Manfro. Naturally Cal turned this penalty down to keep the ball they were gift-wrapped inside of the UCLA 40.

9. UCLA started off the second half by getting called for a block in the back by Randal Goforth. This was an ill-advised kick return by Thigpen anyway because he was a few yards deep in the end-zone. But the block in the back caused UCLA to start their opening drive at the 8 yard line. Not setting up for success.

10. Cassius Marsh jumps offsides to give Cal a first down on a 3rd and 2. UCLA had just scored to cut the score to 23-14. UCLA was in position to get the ball back about halfway through the 3rd quarter. Maynard got another Bruin with a hard count.

11. Aaron Hester makes his fourth and final appearance in the penalty showcase. After missing two tackles in the open field on the drive, Hester manged to miss his third by grabbing C.J. Anderson's face-mask as he ran by and gave Cal a first down on a 2nd and 21 play, turning a potential 3rd and 13 into 1st and 10. Play after was the Keenan Allen TD on Sheldon Price.

12. The next penalty says it is a hold by Todd Golper, which is incorrect. It was Ben Wysocki, filling in for one of UCLA's freshman tackles, who both missed time due to either ineffectiveness or injury. Turned a 2nd and 6 into a 2nd and 16. Converted that on a big play to Shaq Evans; but the next play was intercepted and returned 57 yards.

13. Final penalty. A hold by Jeff Baca. Turned another 2nd and 6 into an 2nd and 16. Followed by a sack and another interception on a forced pass to Evans.

There's a lot of experience in those mistakes.These aren't aggressive penalties for the most part. I'd be fine with those.

Yes, most of those mistakes were made by UCLA's upperclassmen. Of course some will just conveniently blame this to "culture" left-over from previous regime, which makes all the off-season, pre-season hype about culture change nonsense even more absurd.

That fact is that issues we saw against Cal stemming from mental mistakes and self-inflicted wounds didn't have much to do with inexperience, but more with a coaching staff which still hasn't done much to bring a sense of basic discipline in this program.

What is even more disturbing is that Mora was somehow in denial of the penalty issue with his team heading into the Cal game:

[Penalty] wasn't a concern until last night. And the reason it's become a concern is we really put an emphasis on it. I always look and see what the reason for the penalty is and if we have an offsides or false start to me those are lapses in concentration. If we have a hold or we have a face mask, we ask, are we up against a guy that we're overmatched or are we not doing things technique wise to avoid the penalty. Last night we weren't using the appropriate technique that we should use to not have to hold or grab a face mask or do something like that. Just something we have to continue to stress.

Really, penalty wasn't a concern until last night? So all that post-game presser comments from recent week about how things needed to be "cleaned up" was nothing but lip-service? More than that, the coaches were not concerned about UCLA being one of the most penalized team in the game that clearly impacted us in our first five games (and arguably cost us in a winnable game against Oregon State).

BTW let's get back to something Mora mentioned at the beginning. He talked about how Saturday night's game was a "difficult environment" for our team. Well, just how "difficult" was this "environment" at the Memorial? Well take a look at this - it's a snapshot I took from our section of the UCLA sidelines right after our first TD: 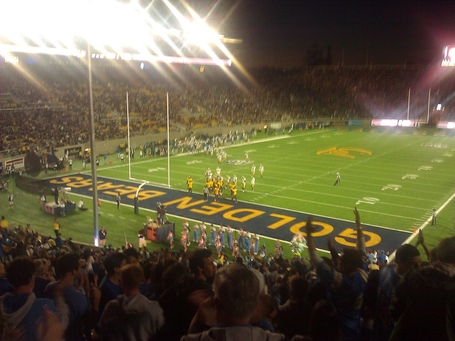 You see all the yellow patches behind our sideline? Those are all empty seats.

That's right. The announced attendance for last night's game was 57,643 at a stadium that holds about 63,000. Yet despite all those empty seats in Mora's world somehow that's a "difficult environment" for a 4-1 football team that is supposed to more than a good football team.

The guy's excuses right now sound lamer than the performance of our football team on the field.