The Bruins still hold the all-time record at eight consecutive wins, and here’s hoping we eclipse that record starting with Saturday’s game. U.C.L.A. versus u$c, playing for the outright Pac-12 South division championship – how do the teams compare?

"Beating '$C is not a matter of life or death, it's more important than that."

The disdain for trogans is ubiquitous. During breakfast at Frank's Diner (worth the trip) in Spokane before the Wazzu game I had the opportunity to speak with many Wazzu fans. The conversation always ended the same: "Good luck tonight, and please beat u$c* - I can't stand those guys". Similarly, wearing a "Beat USC" pin at an away game turns even the most ornery Pac-12 rivals into drinking buddies. The trogans' cheating, arrogance, lack of accountability and undeserved sense of entitlement are despised throughout the land.

And here we are, a mere day before the most important game of Mora's so far (mostly) impressive start. It's been six long years since we've beaten the trogans, and we lost each of the seven years prior to that save 2006. The Crosstown Rivalry, the Battle of LA - it's about bragging rights, it's about pride, and it's about time for the Bruins to take back the Victory Bell.

The Bruins still hold the all-time record at eight consecutive wins, and here's hoping we eclipse that record starting with Saturday's game. U.C.L.A. versus u$c, playing for the outright Pac-12 South division championship - how do the teams compare?

The Fremeau Efficiency Index (FEI), created by Brian Fremeau, rates a team based on how successful it has been toward maximizing its scoring opportunities while limiting its opponents' scoring opportunities (i.e., are we scoring when we should given our field position and the strength of our opponent, and are we holding other teams from scoring given their field position and strength).

WHAT THE FEI SAYS 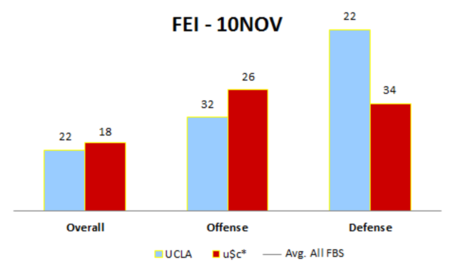 This chart shows our overall, offensive and defensive efficiency ratings. The numbers above the bars represent the team's respective rank in each category.

The first thing that jumps out is, daaang, isn't that ketchup and mustard ugly? Why would anybody willingly go to that junior college across town? The second thought is that, barring some Cal-like catastrophe, this should be a pretty entertaining game. Overall the trogans get the nod, but a small part of that advantage is attributable to Special Teams Efficiency (STE), where we get absolutely destroyed due to our inauspicious beginnings.

I excluded STE on the graph because the results are just ridiculous. $outhern Cal is ranked 13th in STE while U.C.L.A. is far below average at 75th (up 10 spots from last week!) due to the lingering aftereffects of the MMFE and Fairbairn's freshman jitters. If you exclude the punt return and field goal efficiency, U.C.L.A. ranks above u$c* in the remaining STE categories.

This is what one traditionally likes to see in a rivalry game. Two fairly competitive teams meeting up at the end of the season (almost) for a game that has legitimate post-season consequences. Now, I'd be okay with the Bruins routinely beating the trogans into a pulp, but the challenge is good for this young team and good for the rivalry.

The closeness in the two teams' offense and the disparity in the defense looks promising, but let's take a deeper dive at the components that make up the offensive and defensive efficiency ratings. The measurements below consider at what our offense has accomplished and what our defense has allowed our opponent to accomplish in terms of: 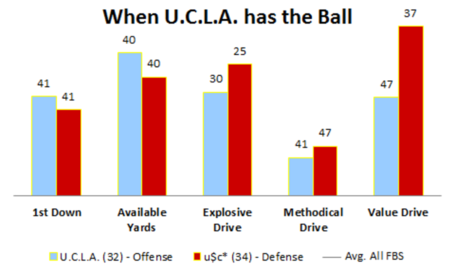 I had to monkey a bit with the ratings to make them comparable between offense and defense; that's why you'll see instances of similar rankings but different heights on the categories (e.g., for Methodical Drive U.C.L.A.'s bar is lower, even though it is ranked slightly higher). This is due to the different averages across all FBS teams on offense and defense amongst applicable categories. In these cases the rankings are close enough that neither team has a significant advantage.

Anyway, when U.C.L.A. has the ball the greatest discrepancy is in the Value Drive category. As described above, this is when U.C.L.A. has started on our own side of the field and put together a significant drive into our opponent's territory (at least to their 30 yard line). With Forbath, this would be FG range. With Fairbairn, it isn't yet, and I'm okay with that. The kid will get there and for now it saves us from being overly conservative a la CRN.

When u$c* has the ball, things get a little more interesting: 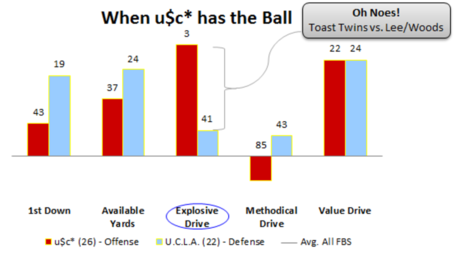 While U.C.L.A.'s defense is rated much higher than u$c's, the chink in our armor lies with Explosive Drives (drives averaging 10+ yards per play). Lee has the potential to tear up any team. Given his skill, unfortunately I don't think Hester and Price will have the type of game they did against Arizona. Last week Woods was held to -3 yards on two catches by ASU; let's hope Price and Hester are reviewing game tape religiously.

To counter this, we just have to get pressure on Barkley. I asked Datone how many times he was going to bury Cheatie's golden boy in the grass during each trogan possession; his response was succinct: 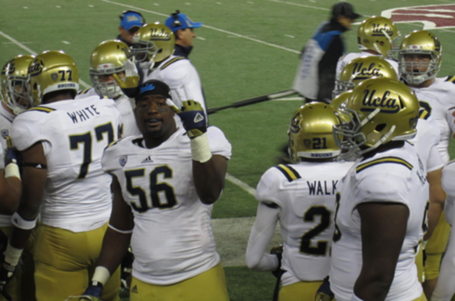 (Datone's holding up three fingers. I actually have no recollection of why...)

On Methodical Drives (drives consisting of 10 or more plays), U.C.L.A. has the advantage. However, our ranking at 43rd is poor, and u$c*'s ranking is somewhat mitigated by their #3 ranking in the Explosive Drive category. Afterall, no need to put together a sustained drive if you can pass the ball to Lee on a slant and have him break off an 80 yard TD run.

Scheming-wise, the area of focus for the Bruins' defense is clear. I'm excited (anxious) to see if Spanos can deliver the same magic he did two weeks ago at the Rose Bowl when the boys in LA Nights blue locked down the ‘Cats explosive offense. Maybe it's time for Spanos to dial up his infamous fang play? 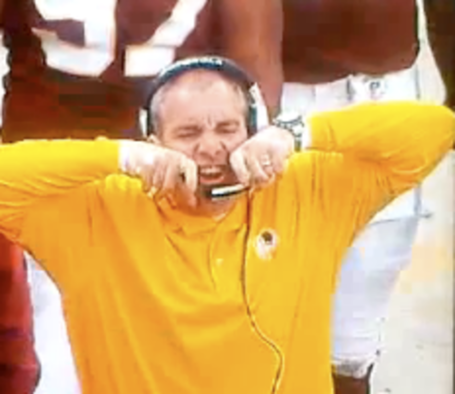 The FEI predicts we'll win 1.0 of our remaining games, down from what would now be 1.2 as of last week. While I'd be happier if this number were a solid 2.0 (or even 1.5), I'm begrudgingly okay so long as our remaining win comes this Saturday. (Eff it, I'm not okay, would love to take down the ‘Furd as well, but one game at a time...)

VERDICT?
u$c* has the edge according to the FEI, but the edge is slight, and I'm thinking the Bruins will come out fired up much as they did two weeks ago and six years ago. McNeal's deflection-spin-dive-interception (via jtthirtyfour) - that's the type of play we're going to need from our Bruins. Couple that with the Rose Bowl rocking with true blue fans and I see the Bruins eeking out a W in a close, hard fought battle.

Tailgate starts at 7am, Lot H. Feel free to swing by and we can toast to what hopefully is the beginning of a new football dynasty over just$c.