I love me some Rahim Moore.

We all remember Rahim from his standout All-American career at U.C.L.A. Now, I get the added bonus of being able to cheer on one of my favorite Bruins who is shining with my favorite NFL team, the Denver Broncos.

There is a really good front page article in the Denver Post Sports today on Rahim and his huge step from year one with the Broncos to year two. Truth be told, I was pretty nervous about there being a year two. Rahim was an early second round draft choice by the Broncos in 2011 and was expected to immediately fill a safety slot on the defense, a position once filled by the likes of all time greats like Steve Atwater, Dennis Smith, and John Lynch. Unfortunately, Rahim had a pretty rough time in his rookie year and really struggled. His free lancing game at free safety in college didn't translate well to the pros, and when you consider some of the issues with coaching and fundamentals at U.C.L.A., it wasn't really too surprising. Rahim whiffied on tackles, got flagged for personal fouls, missed coverages, and ultimately, was benched.

But Rahim kept at it.

"Last year when I went out there, the field seemed big," Moore said. "Now it feels smaller. It's just being a year older and understanding how the game goes. I look upon my first season like being a new parent. When you're a new parent, how do you know what to do? Now, I know."

Moore said he didn't get down on himself last year after losing his starting job "because it was my fault. If I had always made the tackles I was supposed to make, it would have been no problem."

"But that experience made me a better football player," he added. "I'm playing the best football I've ever played. It's the time of your life when you know you have to work at something.

"I came back thinking, 'I'm going to get my (starting) spot back and I'm never going to give it back.' And I meant that in the most humbling way."

That attitude and commitment has paid off in year two. Rahim has been a really solid tackler all season. He is second in solo tackles, and third on the team overall, showing how his technique has really improved. No more whiffs this year. He led the team in week 5 against New England with 12 tackles. Last week against Carolina, Moore added his second career interception. The Broncos defense as a whole has improved this year, and Rahim's emergence as a reliable free safety has a lot to do with it.

"I think it was tough for him last year, a guy like that coming in and getting thrown into the starting lineup right after the lockout," Bailey said.
"That had to be a tough situation for him. He's grown up a lot. I think he's starting to understand the game a lot better too. All that combined makes him a better player. He's more polished, more experienced."

And to add a bit of a personal touch to it...

I was walking into Mile High with the family a few weeks back when I noticed a group of 3 or 4 people all wearing official #26 Rahim Moore jerseys. I happened to know those jerseys were only special order and you couldn't find those at the stores - because I'd been looking. Taking a chance, I stepped alongside, tipped my U.C.L.A. cap and said I noticed their jerseys - as a Bruin, I was a big Rahim Moore fan, too and was really excited with how well he was playing this season. The group turned out to be Rahim's family, and they were understandably very proud of him and particularly with how hard he has worked to improve his game this year. The proudest, of course, was his mother Nowana, a lovely lady who was extremely proud of her son, and was so gracious and kind to talk to my family and myself. She was even willing to hop in a picture with a fellow Bronco/Bruin/Rahim fan (and said "of course" when I asked if I could post it here) 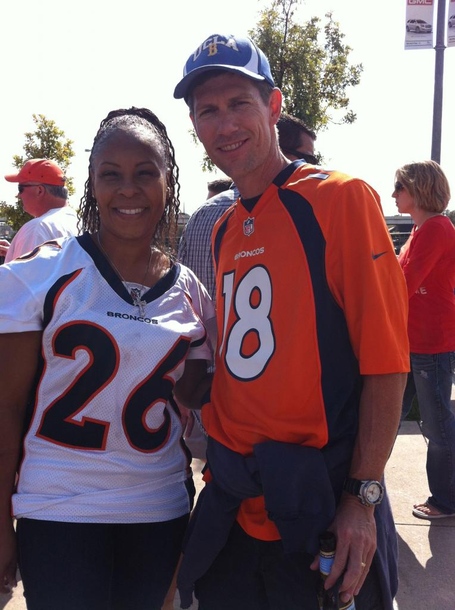 (photo courtesy of my wife, who gave me permission to post, as long as I ran to the store first)

It's great to see our Bruins stepping up and being successful at the next level. I expect the Rahim "the Dream" Moore fan club will continue to grow. And as soon as the Rahim jerseys are on the shelves, I'll be sporting a 26 in predominantly orange, even though the #18 guy from Tennessee is pretty sweet, too.