I was fortunate to attend this event. Darn them for not writing more about it. Save me a lot of typing. The attendees was a who whos of UCLA athletics. I saw Kareem Abdul Jabbar, Pete Vidmar, Denise Curry, Sinjin Smith, Jamaal Wilkes, Don Maclean, Marques Johnson, Rafer Johnson, and Jim Harrick. Yes I did see Coach Howland talk to Jim Harrick.

The program started off with a video on the new scoreboard with people running and dribbling a basketball. Kareem and other male and female UCLA great basketball players made an appearance in it. It goes by Royce Hall before finishing at that IM entrance at Pauley. Three persons in tight bodysuit start working on the painting on center court. After the video, Kareem enter the new floor and dribbles a basketball. He sky hooks a pass to the Chancellor. Then a few words from him. He pronounce Tyus(Edney) differently. Yeah that will he help his reputation with us. Short speech from the AD and Matt Pauley, Edwin Pauley grandson I think. Mike Warren introduce all of the varsity team as all of them start making their way on the floor. Wow did you know the rowing team has the highest number of athletes on the women side?

Once all of the athletes were on the floor and the painting was finished, one member of each team came up to the painting picked it up, turned it around, and carry it over to where it will be raised. As this was going on, all of other athletes gathered closely with arms around each other shoulders and Philip Philips' song Home was playing. And it ended with a 8 Clap. Yeah I will mention that it is tough to get this crowd to get out of their seats. Not too many people gave a standing ovation for the moment. Afterwards in the concourse, all of the athletes were available for mingling. I met a student athlete from the women track, women's basketball, half of the men's volleyball, and Tony Parker. He came up to me. Introduce himself. Shook my hand. Though 15 is my number, Tony Parker could be my favorite.

If anybody cares it my initial thoughts of "New" Pauley, the outside is ok. I dont think it matches any other building on campus. The concourse is nice but still probably too narrow. Lots of tributes to the great UCLA athletes everywhere around the concourse. I especially like the wall of national champions. You see it i when walk in from north side or the IM field entrance. Pics and list of all the NCAA champions. I was one of the track managers in 1988 and I was in the team picture for that national title team. So I have a picture of myself while I was at UCLA somewhere at UCLA hopefully forever. I will try not to have too much pride of it because I probably did the least amount of work to be in that picture.

The court area still looks and feels the same with cosmetics fix up like the new scoreboard, ribbon scoreboard, and new stainless steel rails, The Pavilion Club was not impressive. It seems empty and not very first class for well heeled donor. I dont know if they installed the all of the furnitures and tv screens yet. But more would help. Yes the half of iconic center court is displayed on the east wall of the concourse where they had the list of Pauley donors previously. 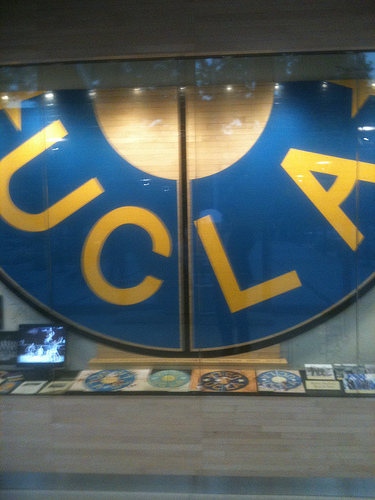