I thought the frontpagers’ were fair in setting up their expectations for the Bruins this year. They took a bottom-up approach, analyzed each game (OOC, home, away), and expected the Bruins to come into the Southern Cal game with 8 or 9 wins before reversing recent fortunes against Troy. My favorite bit of the analysis was this line from Tasser: "Matt Barkley stayed at U$C, which I hope he will regret a lot and cry himself to sleep over." Ain’t karma sweet?

To be honest, at the outset I didn’t think the Bruins would achieve frontpager standards – not because those standards weren’t reasonable, but because of the soft culture our program had and the unproven leader we’d brought in to fix it. There were some real doubts that we’d get there, especially after that Cal game, but the Bruins delivered. Congratulations to Coach Mora, his staff and our tough student-athletes for all of their hard work and determination this year – amazing year so far and it’s not even over! 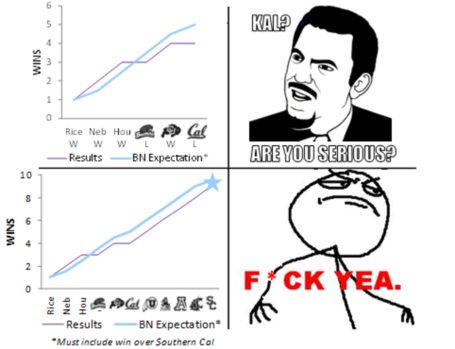 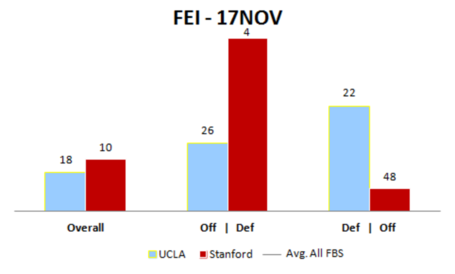 This chart shows the overall, offensive and defensive efficiency ratings for U.C.L.A. and Stanford. The numbers above the bars represent the team’s respective rank in each category. As with last week, I excluded Special Teams Efficiency (STE) from the graph due to our rough start – the Indians are ranked 26th and the Bruins 74th (up one spot from last week). Special Teams has been playing out of its mind these past two games and I’m not the least bit concerned about this unit.

Overall, Stanford jumped 3 spots from last week with their win over the Ducks; U.C.L.A. fell 1 spot with its win over Southern Cal. Makes sense, I guess, after all it was just$c.

The graph clearly shows this game to be a defensive battle for both teams. In general, Stanford gets the nod, and the Bruins will be going up against the most efficient defense in the Pac-12. OSU, ranked third in the conference, is the toughest defense in the Pac that the Bruins have faced thus far; U.C.L.A. is ranked right behind them at fourth.

Let’s take a closer look at the components that make up the offensive and defensive efficiency ratings. The measurements below consider at what our offense has accomplished and what our defense has allowed our opponent to accomplish in terms of: 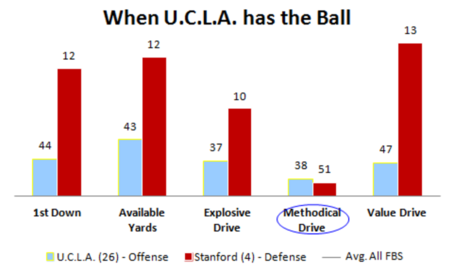 This defense looks suffocating. The only category that is remotely close is Methodical Drives (those running 10+ plays), where U.C.L.A. actually has the advantage, albeit it ever so slight. The key then for U.C.L.A. will be to keep its drives alive and actually turn yardage into points. The field position battle will be crucial.

By the numbers, let’s look at last week’s pertinent games. Oregon and U.C.L.A. had almost identical yardage in last week’s games (405 vs. 406) – the difference was U.C.L.A. converting that to 38 points, enough to win, while Oregon managed only 14 points. Part of this was due to big plays by the Stanford defense, which often occurred early in Oregon’s possession. This put the Ducks in several third and long positions, something they are unaccustomed due to their stellar running attack.

IEAngel further supports this in his always exceptional "Eye Test". IE likes this matchup for U.C.L.A., noting that Stanford has "not faced a run-pass offense as balanced as UCLA's. Oregon is more run reliant than the Bruins and Stanford eliminated the zone-read... UCLA can lean on the passing game and I trust Johnathan Franklin and our offensive line against any defense in the country not residing in Tuscaloosa."

Agreed. Oregon is not known for its sophisticated passing attack. The Bruins have a plethora of receivers it can go to help loosen up the Indians and allow Jet Ski to work his magic. 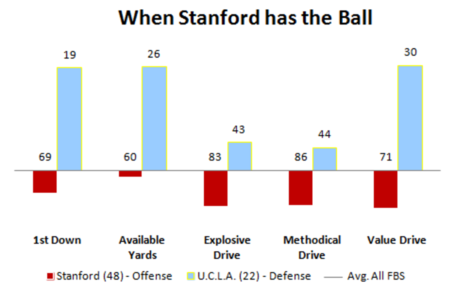 Nothing to worry about, right? Shut out! Actually, this graph is a little misleading because the figures used represent raw numbers before they’re adjusted for SOS. For reference, Stanford’s raw Offensive Efficiency (i.e., the numbers graphed above) is ranked 71st, but jumps to 48th when adjusted for SOS. Stanford’s SOS to date is ranked 6th, while the Bruins’ is 70th.

Time for Hogan to take the Barr exam. #BarrSoHard

VERDICT?
Here is how the FEI has done at predicting our games so far: 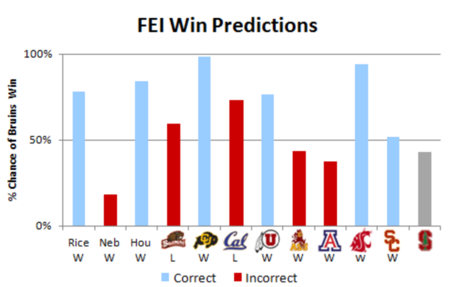 The vertical axis represents the % liklihood that the Bruins will win. FEI has been right on 59% of its U.C.L.A. predictions; we beat the odds on the desert schools, but failed miserably against Cal.

The FEI gives us a 43.2% chance of beating the Indians this week. However, besides the offensive advantage explored above, I think the Bruins have a coaching advantage going into this. Listening to the post-game interviews almost all of our players qualified their joy with a statement about getting better and focusing on Stanford. Success has been driven into these kids’ minds. Coach Mora will have his team ready. With home field advantage, if U.C.L.A. can unsettle Stanford with a balanced attack, our defense should be able to hold Stanford to eek out a win (over/under at 45).

Coach Mora’s season has been a success based on the tough, yet fair, expectations set up by this community. Time now for the Bruins to THINK BIG – the monopoly isn’t over, it’s just started.

ADDENDUM
Even though the players have moved their focus to the Indians, I’m still riding a high from most recent win (even if partially tempered by last night’s loss to the Hoyas). One more quick celebration for: 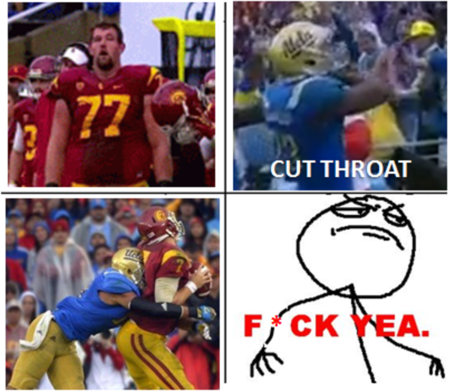 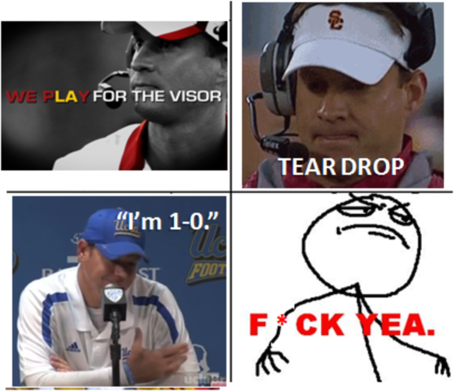 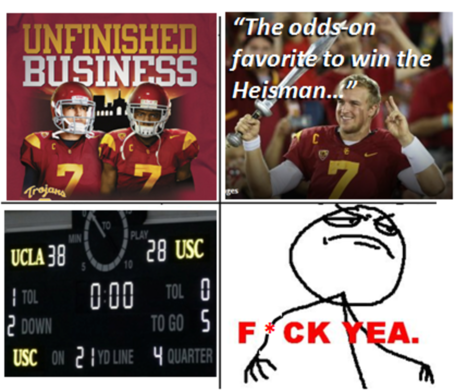