You know you've made it when people start knocking you off, right? Louis Vuitton, Gucci, any handbag you can purchase in a shady basement in NYC's Chinatown (I've, uh... seen them...) - when the public wants more of you, there will be "people" out there ready and willing to accommodate.

Unfortunately, with the success of our football team and some of our freshman players, we have our first (and hopefully last) social media "scandale du jour."

About two weeks ago, a twitter account with the handle of @RandallG3000 popped up on the twittersphere. It allegedly belonged to Randall Goforth. The tweets were innocent enough - accepting congratulations for his play over the weekend, random tweets about Daylight Savings Time, nothing out of the ordinary. Until tonight, when the account fired tweets off about USC.

That started the Twitter War between the USC and UCLA fan bases that chose to engage. Many tweets were tossed about. Proper grammar died to bring us this twitter war. 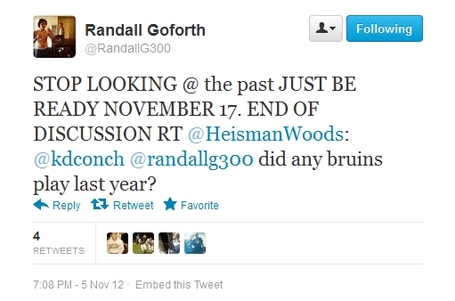 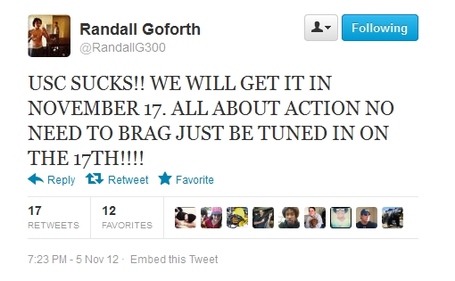 At this point, I start freaking out, because if this was REALLY Randall Goforth, then my Twitter stories each week just lost a LOT of content as Mora would have brought the hammer down on Twitter use by the players. 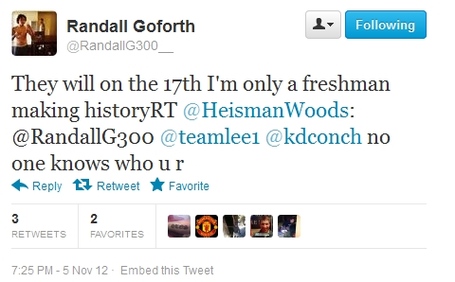 Ok, this is when I realized something was up. Goforth has never struck me as having this much attitude. Frankly, none of our players talk like this on Twitter.

And this is the one that confirmed it. Randall Goforth is not a starter on defense, unless you count punt returns. IMPOSTOR.

This serves as an important lesson about just how quickly things can spread across social media. In one hour, one fake Twitter account riled up the USC fan base and elements of the UCLA fan base that egged it on. Everyone, this was a fake account. I like to believe that our players hold themselves up to a higher standard - that they are not looking ahead two weeks, disrespecting WSU by ignoring them, and they are not going to deliberately go out and engage a player from another team on a public medium such as Twitter. Frankly, most of these kids are friends with each other, from the years they spent competing with and against each other. They rarely call each other out. This isn't pro football, it's college.

Further, it's also a lesson on how to conduct yourselves on social media. Watching the tweets escalate was like watching a train wreck in slow motion. It got ugly. There were nonstop mentions of 50-0 by one side, and "we're ranked higher than you!" on the other. It doesn't represent what we, as UCLA fans are about, and we shouldn't have to stoop to these tactics.

Prove it on the field. Not on a medium that doesn't verify who is sending out the tweets.

By the way, I have to praise our football team. When they got wind of what was going on, they were QUICK to defend their teammate:

YO! EVERYONE, Randall Goforth does not have a twitter!!!! Someone is posing as him!! Forgive the tweets they have been posting.

Everyone needs to unfollow @randallg300....that is a fake twitter that someone is using to start trash talking.

FYI … @randallg300 is a fake. The real Randall Goforth is preparing for Washington State

Be careful on the internet. It's a jungle out there. You thought "agents" trying to jump on players as they come through college programs were bad? It's worse when it's a nameless individual behind a keyboard.