After destroying Arizona, UCLA's defensive numbers are looking good. But the Bruins still have three big games to play and our clobberin’ of the ‘Cats means nothing if UCLA plays down to Wazzu or beat Southern Cal.

With few exceptions, I've been to every home game since 2006 - I've never seen the Rose Bowl like it was on Saturday, it was absolutely electric. I was there for 13-9 and the energy and vibe in the stadium on Saturday eclipsed 13-9 by far (in the first half, anyway; people actually started clearing out pretty early during AZ game).

Jet Ski's record-breaking run, Coach Mora's TO and the celebration of Jet Ski's accomplishment by the team and fans were surreal. What an amazing moment that was to be in the Rose Bowl, I don't think I've ever been more proud of the team.

As crazy as the game was on the field, it was even crazier in the stands. In my section alone we had a woman get sick all over a fan as she was escorted out by security, the medics carried out a man after he suffered what I'm told was a heart attack, and our tunnel out of the Rose Bowl was closed off when another girl passed out inside of it. If this is what success looks like, I'm not sure the Bruin fans can handle it.

But, even crazier still I think was our defensive performance. I fully expected this game to be a shoot-out, and what our defensive unit accomplished (holding the #4 offense to 10 points, with only a FG in the first half) was ah-mazing. 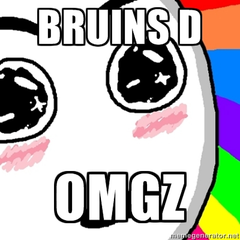 We know we have the potential for a powerful offense with Mazzone, and he upped the ante in the Arizona game; Spanos though took things to a whole other level. The defense was in beast mode - ‘Zona was held to 136 yards passing, 121 yards rushing, and 3 fumbles. When Arizona played Oregon they at least had chances. Against the Bruins? Nothing.

Accordingly, this week let's take a look at U.C.L.A.'s Defensive Efficiency (DE), a composite measure of what our defense allows our opponent in terms of:

DE is a component of the Fremeau Efficiency Index (FEI), which was created by Brian Fremeau, and which looks solely at a team's results on the field and how proficient it has been so far. It answers the question of how successful our play has been toward our main goal of maximizing our scoring opportunities while limiting our opponents' scoring opportunities (i.e., are we scoring when we should given our field position and the strength of our opponent, and are we holding other teams from scoring given their field position and strength).

We're ranked 15 defensively out of 124 FBS teams, up from 22 last week. Stanford leads the Pac-12 at 7, with Oregon and OSU above us at 9 and 11, respectively. Interestingly, Wazzu's defense is ranked 72, just one below Arizona, who dropped from 60 after their embarrassment at the Rose Bowl.

Drilling down, where can we improve? 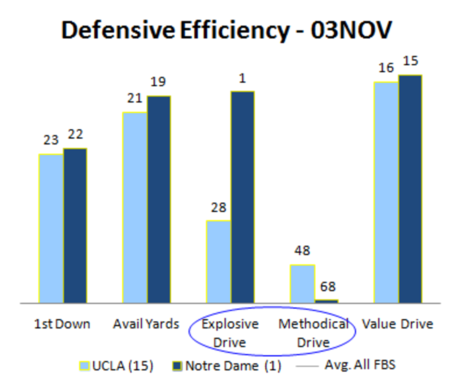 I compared U.C.L.A. to Notre Dame, who ranks first in overall defensive efficiency (10th in yards allowed). The numbers above the bars represent each team's ranking by category.

1. First is the disparity between the two teams in the Explosive Drive category. As defined above, this represents the percentage of drives our defense allows that average 10 or more yards per play. This was also the area I was most concerned with in last week's analysis before facing Arizona; thankfully, it turned out to be a non-issue.

Based on data provided by cfbstats.com (as compiled by Marty Couvillan, who has pulled together an insane amount of college football data going back to 2005), U.C.L.A. has allowed Explosive Drives on 13 out of 136 drives (9.6%) through our first nine games. In fact, four teams (Cal, Neb, OSU, Rice) accomplished two or more Explosive Drives during their play against the Bruins (i.e., two or more drives averaging 10+ yards per play).

2. Second, and more alarming, is our poor score in the Methodical Drive category (drives consisting of 10 or more plays), where we rank 48 out of 124 FBS teams. Our defense has allowed 18 sustained drives (12.4%). For comparison, LSU, ranked 3 in this category, allows sustained drives only 7.8% of the time.

So, we need to do a better job getting the opponents off the field quicker (Methodical Drives) and are doing okay but have room for improvement on our big play defense (Explosive Drive). Still, ranked 28th in the Explosive Drive category isn't too bad, and I suppose is a function of the more aggressive style of D we're playing in which we are getting more pressure on the opposing QB, but have set ourselves up for the occasional big play. At any rate, I'm pretty sure nobody is dying to trade this current iteration of D for Walker's bend-don't-break style.

Here's an updated look through November 3 of our past and remaining opponents: 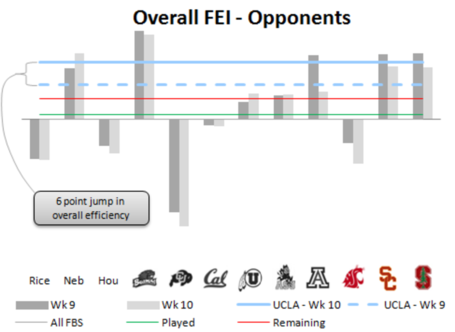 As I mentioned briefly in the frontpagers' Power Poll, U.C.L.A. took a 6 point jump in their overall efficiency this week. This is huge. Remember, the FEI is adjusted for SOS, so U.C.L.A. is rewarded much more for a win over Arizona than, say, Stanford is for their blow-out over Colorado; indeed, Stanford's efficiency actually went down even after shutting out the Buff's 48-0.

The rest of the Pac-12 didn't fare so well, either. Utah got some love for their beat down of the hapless Coug's (2 point jump), but everyone else essentially stayed flat or dropped.

Also exciting is that for the first time this season the FEI rates us above our remaining opponents (our future SOS dropped from 30th last week to 50th this week). The FEI predicts we'll win 2.2 of our remaining games, up from what would now be 0.9 as of last week and 0.2 the week before. This would put us at 9-3, meeting frontpager expectations if that includes a win over u$c. How cool is it to see predictions converging with expectations?

However, my optimism for this team remains tentative. As astonished as I was with Saturday's performance, the experience is entirely new for me. When I became a Bruin I had no idea at the time the heartache I was getting myself into with U.C.L.A. football. Forgive me if I remain a bit gun-shy, but we still have three big games to play and our clobberin' of the ‘Cats means nothing if we play down to Wazzu or drop our game against $c.

How we play these last few games will define the Arizona game as the continuation of a positive trend started at ASU, or another aberration in a long line of Bruin let-downs.

Let's keep this short. Our play thus far (including the Beatdown in Berkeley) has placed us in the Top 15 of the FEI. The Coug's are an abysmal 97th; we should have no problem dismantling them. Our offense should put up a ton of points with long, sustained drives and quite a few big plays. Our defense should be stalwart, forcing a ton of 3-and-outs and defending well against the long ball. (A lot of shoulds in there, I hope we can focus and deliver.)

On special teams, the conspicuous absence of the MMFE (no, not this MMFE) improved our special teams efficiency from 100 to 85, but even WSU is still ranked above us at 76.

VERDICT?
Bruins should win easy, but it'll come down to their mental fortitude (ignore the hype!), a good week at practice and ultimately the coaches getting our team ready for a classic trap game in a hostile (weather and crowd) environment. For my part, I'm heading to the game - will try to take pictures, but will likely be too cold to work a camera. Go Bruins!