Pass That Bottle - The Devil's Daughters AZ Rockabilly (via BerCoProduction)

(This week's video is Pass that Bottle by The Devil's Daughters. They are from Arizona and I think the song is great and the DD's are hot. And we swept the Arizona schools this year.)

One third of the Pac 12 conference teams have new coaches this season. Besides our own Jim Mora, there’s Todd Graham at Arizona State, Rich Rodriguez at Arizona and Mike Leach at Washington State. Oddly enough, the three other schools with new coaches were on our schedule in consecutive weeks. Mora has topped Graham and Rodriguez in our last two games and Leach is up next tomorrow in Pullman.

All four of the new conference coaches were in place last January and Sports Illustrated’s Stewart Mandel weighed in on each of them. Here is what he wrote:

AD Bill Moos looked past the controversy surrounding Leach's bizarre 2009 ouster in Lubbock and focused more on his 84-43 record and 10 straight bowl trips. The quirky offensive mind is a perfect fit in remote Pullman and already has the quarterbacks (rising senior Jeff Tuel and sophomore Connor Halliday) he needs to lead the dormant Cougars to their first postseason berth in nine years.

AD Greg Byrne knew exactly who he wanted, pouncing early (Nov. 21) in naming Mike Stoops' replacement. While Rodriguez's three-year tenure in Ann Arbor did not end well, the pressure is much lower in tradition-starved Tucson. He's reunited the majority of his staff from West Virginia, where he led the Mountaineers to two BCS bowls. Arizona is still waiting on its first.

After striking out with Chris Petersen, Al Golden and Sumlin, AD Dan Guerrero turned to an unemployed NFL lifer. Mora has assembled a nice staff and will likely make initial waves in recruiting, but history does not bode well for NFL-bred coaches. UCLA hopes Mora will become its Pete Carroll, but odds are much higher he emulates Bill Callahan, Charlie Weis, Chan Gailey, Mike Sherman ...

Forget the unseemly way he exited Pitt. Why exactly is Graham is a hot commodity to begin with? It's certainly not due to his one 6-6 Big East season. He had three 10-win seasons at Tulsa, but much of the credit belongs to respected offensive coordinators Gus Malzahn and Chad Morris. His one season without either, he went 5-7. But perhaps his fourth dream job in six years will be the one.

To be fair to Mandel, just a few weeks after giving the Mora hire a D, he named the Bruins’ coach Recruiter of the Year. He wrote:

Recruiter of the year: UCLA's Jim L. Mora. The 26-year NFL veteran had never spent a single day recruiting prior to his Dec. 10 hire. After assembling a solid staff (led by ex-SMU assistant Adrian Klemm, a highly connected L.A. recruiter), Mora killed it down the stretch, landing 15 of UCLA's 28 signees after Jan. 1. The haul was highlighted by three of Rivals' Top 100: defensive tackle Ellis McCarthy (Monrovia, Calif.), athlete Devin Fuller (Old Tappan, N.J.) and receiver Jordan Payton (Westlake Village, Calif.), the latter of whom committed to three other Pac-12 schools (USC, Cal and Washington) before signing with the Bruins.

"It's been exciting, it's been educational, it's been a lot of fun," said Mora. Now we get to find out Mora's approach to "roster management." It's believed the large class puts UCLA as much as 10 above the 85 scholarship limit.

UCLA ended up with one of the better recruiting classes in the conference last February. Leach, on the other handed, ended up with the worst according to Scout.com. 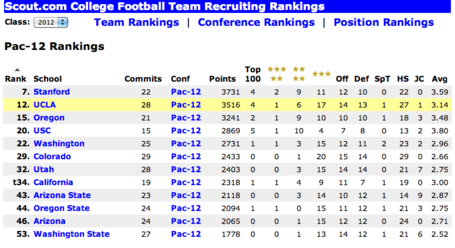 The regular season hasn't been any better for Leach than the recruiting season. By virtue of a one point loss to Colorado in September, Washington State is the worst team in the league. To top it all off, they are in call-your-players-cowards/suspend-your-star-player/players'-only-meeting mode. In short - despite what appeared to many some to be a great hire -- the Leach era has been pretty much a disaster to this point.

This is a game that the Bruins must win and will win.

If this were last year -- or any other year in the last nine or ten -- I wouldn't be so sure. I'd hedge my bet. I'd point out that Pullman is (supposed to be) a tough place to play. I'd note the cold weather expected up there this weekend. I'd reference at least one of our historic losses to the Cougars.

I'd definitely mention the fact that the two best teams on our regular season schedule follow the Washington State game. I called it a trap game earlier this week. But Jim Mora doesn't believe in trap games:

"I don’t believe in trap games," Mora said. "I believe that is a term that the media and fans use. Coaches don’t use it. For us, it’s just about getting on to the next game, focusing on what we need to do to win this game."

And on second thought, neither do I.

For me, the last two weeks were convincing. We are a good team. Good teams beat bad teams despite the weather or location or who is on the schedule next.

The last two games -- a comeback on the road against Arizona State and a blowout of an Arizona team good enough to beat USC -- were "good team" performances. I'll say it again: We are a good team having a good season.

All things considered, I'm not even bothered by the two losses, a frustrating performance at home against a tough Oregon State team and a poor performance on the road against a not-to-good Cal team. I believe that those two poor performances actually inform the way we've played since. Mike Riley and Jeff Tedford exploited some weaknesses. Jim Mora and his staff made adjustments. The players learned they couldn't just show up in games they expect to win. They learned they had to prove it on the field and since Cal they have.

A few weeks ago I asked how many games we'd win during the ASU/AZ/WSU stretch. 3-0 looks like it was the least popular response. Well, guess what -- it's going to be 3-0.

We're a good team that will be 8-2 on Sunday morning.

No matter what happens the last two weeks, we're a good team.

The next question will be, Are we a good program? I think we are, but it's a question that won't be answered for a while.

But for now, here are you Pregame Guesses, Washington State Cougars Edition:

Bonus comments:
There were some interesting quotes from Jim Mastro, Washington State's running back coach in the Spokesman-Review yesterday. They didn't really work in the post I was working on, but I wanted to present them because the one thread that has run through the guesses columns this season is that what is going on this year is a break from what went on during the last regime. Mastro, you will recall, was on our staff last year. Here is what he said (and feel free to discuss in the comments below).
(Short update: I should have given a H/T to Bruin Report Online where I first saw a reference to that article. It was an oversight. My bad.)

(What's clicked for UCLA this year, from what you've seen?) "First of all the quarterback is huge. He couldn’t play last year. Second of all he hired a great staff there, some really good coaches. He came in with a plan in place. They’re executing that plan and you’re seeing the results. It doesn’t surprise me with the talent they’ve got. The quarterback’s the one thing and they hired really good coaches on offense there. I don’t know about defense too but offensively they’ve got really good coaches, he has a plan, he’s sticking to his plan and you’re seeing the results of it."

(Which coaches in particular?) "All of them — Adrian (Klemm), Yarbs (Eric Yarber), keeping Marques Tuiasosopo — those are three really good coaches too. Noel (Mazzone) does a great job with the offense. To me the quarterback and then the coaches they’ve got on offense are the difference."

(Did you want to play Brett Hundley last season?) "We couldn’t because he tore his MCL in the summer and basically was ready week five, and you can’t do it then. You can’t burn his redshirt after that. But if he could have not torn his MCL in the summertime, he probably would have been our starting quarterback last year and Rick (Neuheisel) would probably still be there. But everything works out for the best."

(What was wrong with the culture?) "I was only there seven months. Just from my observation coming from Nevada where it’s a structured, discipline, hard-nosed approach, I just didn’t see that there (UCLA). I don’t know what it had been in the past but that’s what it missed. It just missed that blue-collar atmosphere. You could see Jim has brought that there. They’re blue collar now. They’re playing hard, they’re playing fast. All the things you tried to get them to do last year, you’re seeing it now. When you win, it obviously helps. Again that coaching staff he has is really good, and he does a hell of a job of putting a plan together and you can see he sticks to his plan. You’re seeing the results of it right now. They’re really good."