Bumped from the Fanpost (the functionality is back!). Few members of BN community organized a tailgate before UCLA's Holiday Bowl in San Diego. The result was epic. - BN Eds.

For me, was the Tailgating.

And, while it is easy to go on and on about the food and camaraderie; this tailgate went epic level before we even got started. Grab a seat and sit a spell while I spin a heartwarming tale of Bruins coming together for a good old fashioned pre-game ritual of tailgating. 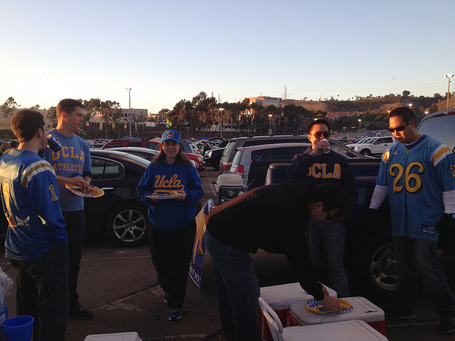 When did this begin? It's hard to say. Depending on who you ask, this began either when Nakatomi Plaza mentioned in one of the threads that he had 10 extra Holiday Bowl tickets he wanted to sell; or it began in the 'Turning San Diego Blue' thread when I mentioned that anybody who wanted to tailgate should email me off list. In reality, both gave people opportunities to meet other BNers and just hang out. Everybody who came out had 3 things in common. 1) We each traveled in small parties, and wanted to join others. 2) We all read and love Bruins Nation. And, 3) we all love UCLA Football.

It began simply enough. I assembled all the emails I received from the "Turning San Diego Blue" thread and created a Google Docs Spread sheet. When I stopped receiving emails, I emailed everyone and hosted a conference call wherein we basically discussed such serious matters as, "Who else has a grill?" And, "Who's driving and who's taking the trolley?" During the conference call I shared the spread sheet and created columns so people could let us know how many people they were bringing, and which food items they were going to bring. We agreed to meet at Costco which is right next to the stadium then drive in and park when we had everything and everyone. It was a really simple plan and given my experience with tailgating at the Rose Bowl. Nothing could go wrong. Then for the better part of two weeks, we did nothing but wait. 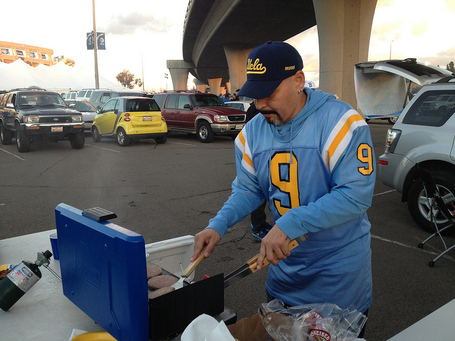 Then of course everything began to go wrong. We had agreed to meet at Costco at 3pm. UCLA'94 was driving me and my roomie to the game, and promptly at 3 O'clock the phone started ringing. WickedBruin had arrived at the Costco Parking Lot at 2pm and wanted to go in. No, check that: he was going in. He was just kind enough to make it appear like I had say in the matter. '94 and I were stuck in traffic on the 5 freeway near Oceanside at the time. If you check your maps, that is nowhere near Qualcomm. Traffic was a bitch that day. Although whether it was due to the game or just shitty on it's own was hard to say. After a number of phone calls and text messages I was able to put the following picture together.

WickedBruin was at Qualcomm and parking. Dbear737 and MathBruin were very near Qualcomm. Tony Sandoval was on the freeway about 20 minutes ahead of us. Bruinchick was driving alone and about 20 minutes behind us. NicoBlue&Gold and UCLAluv were taking the trolley although separately, so they were already in the San Diego area in hotels presumably. 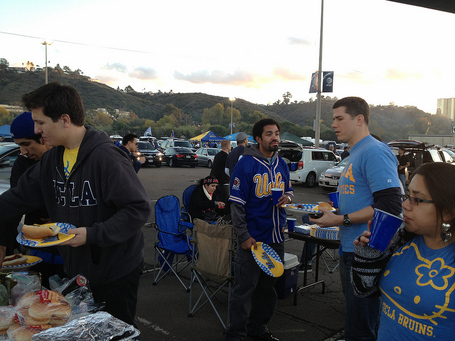 And this is exactly when everything went right. Yeah. You read that right. What happened next is one of the best days in my long history of tailgating. Acting as the hub of information, I was able to direct DBear737 and Mathbruin to Wickedbruin's location, providing his description of the location and including his phone number. They met up really quickly and set up spot under the trolley overpass and saved us a number of parking spots. This is where it gets really really cool. UCLAluv had spoken with Dbear737 days before, and she had taken him tables and a portable grill to bring since she was taking the trolley and he was driving. So, they were able to not only pick a spot, they began grilling and that gave us a location to look for. 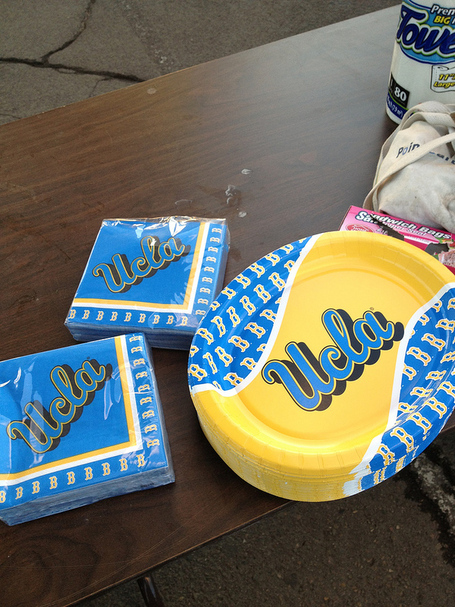 I immediately sent that information to all the parties involved. We scratched Costco off the plans and agreed to go straight there. Meanwhile, Tony Sandoval like the trail blazer he is, jumped off the 5 and its horrible traffic and took the 78 over to the 15, and the 15 straight to Qualcomm. This was "huge" because there was no traffic on either of those freeways. He relayed that info to me, and I passed it along to UCLA'94. Then I called Bruinchick and passed the info to her. We flew after that and got to Qualcomm not too far behind the others. I found Wickedbruin, Dbear737, UCLAluv and their assortment of guests already tailgating. I called NicoBlue&Gold, let him know we were there and he headed over. (He was double dipping with other friends who where tailgating). Bruinchick insisted on stopping by Costco and picking up beer, and it ended up being very helpful. 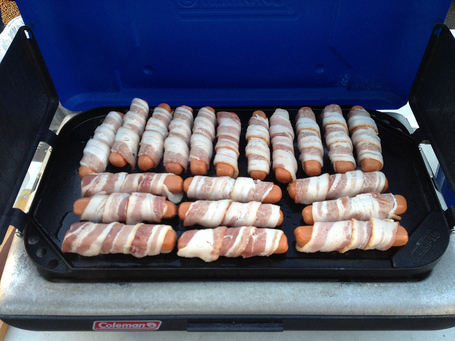 Once I got there, I set up my grilling station and started grilling bacon wrapped hot dogs, while Wickedbruin was serving up this great grilled chicken. People mingled freely. It was a great vibe, especially when you consider nobody had met anyone else before that day. (with the exception of myself and UCLAluv who had met before: she was one of the first to sign the SFatPauley petition)

I cannot tell you guys what immense pride and joy it gave me to be a part of that group on that day. UCLAluv had produced those BN banners you see in those photos. Dbear737 willing to drive her stuff down for the day? Wicked Bruin willing to go in alone and set up? Even with UCLA'94: I was supposed to drive down to San Diego, and he was going to be my passenger. But, as we discussed the amount of stuff I had to bring; the willingness to drive! I simply cannot tell you guys how much I appreciated everybody's willingness to not only pitch in, but go that extra distance. I never felt like I had to babysit anybody or make the introductions: everybody got along really well with everybody else really well.

A number of us are taking our show on the road. We are going to road trip together over to Lincoln Nebraska for our game against the Cornhuskers next year. 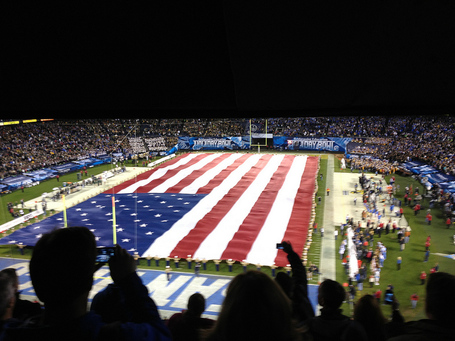 After the game we got back to UCLA'94 suv to find the guys had somehow acquired this huge string of Blue and Yellow balloons. Presumably from the nearby Blue and Gold tent. We tried to lift Bruinchick's Smartcar. Some of the guys agreed to head over to the Gaslamp district and keep the party going. It was a great night.

As I bring this story to a close, I must borrow the following sentiment from the Ole Miss Rebels: We may have lost the game, but we won the party. 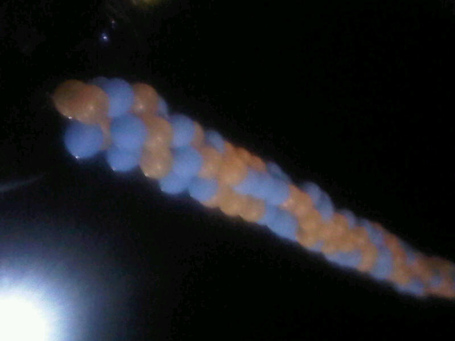 The balloons as they float away.