Tweet Share
 Tweet Share on Twitter Share Share on Facebook Pin Pinterest 3 Comments ⋆ Rec Recommend this Post 2
Two straight losses, to the same team no less, is a tough way to wrap up the season. That those losses were to Stanford, this year’s Pac-12 champ and the California champs three years running, does not make them any less disappointing. However, with the Holiday Bowl on the horizon the Bruins have 15 more practices to erase those back-to-back losses, send our seniors off right and build some recruiting momentum heading into next year.

While the football season has been a success, it’s hard to get so close to the Rose Bowl only to lose in the waning minutes of the game in part due to a questionable call for a 50+ yard field goal in the rain. Onward and upward, let’s see how things look against Baylor using the Fremeau Efficiency Index (FEI). 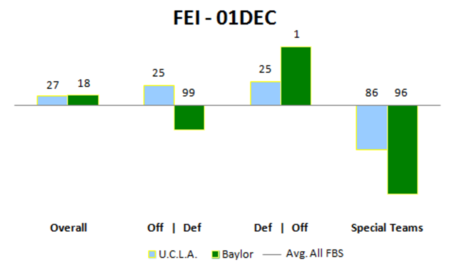 This chart shows the overall, offensive, defensive and special teams efficiency ratings for U.C.L.A. and Baylor. The numbers above the bars represent the team’s respective rank in each category.

Unlike in the past, I’ve included Special Teams Efficiency (STE) here. Yes, our special teams had a rough start with missed field goals and muffed punts, but while kicking has improved, despite personnel changes our return team is still suspect (the fumbled kickoff return in the first Stanford match arguably cost us the game). As the graph shows, both teams are terrible in STE, but the Bruins are less terrible, and I’m looking for any positive I can here considering that Baylor rates as the #1 most efficient offense in the nation going into this game.

Overall, the Bruins’ efficiency trend has actually been downward these past few games. U.C.L.A peaked at 14th in overall efficiency after beating Arizona, but then fell to 18th after just$c*, 24th after Stanford and 27th after the Pac-12 Championship loss. Three straight games of decreased efficiency is not the momentum one likes to see heading into a bowl game.

Baylor, on the other hand, has been trending upward. They jumped from 53rd to 31st after beating then ranked BCS #1 Kansas State, and continued upward to 23rd and 19th after beating Texas Tech and Oklahoma State (BCS #23, and last year’s Big 12 champion who also bested Stanford in the Fiesta Bowl), respectively. Baylor finished their season strong, playing better every week than the week before, and knocking off two ranked teams in the process.

The graph shows U.C.L.A. to be a good, balanced team offensively and defensively, ranked a respectable 25th in each category. Baylor, however, is nowhere near as well-rounded; despite their first ranked offense they have the 99th ranked defense. For reference, that ranking puts them in the company of defensive powerhouses such as Auburn, Tulane, Air Force and Rice ("How can we beat Rice?!").

Let’s take a closer look at the components that make up the offensive and defensive efficiency ratings. These measurements consider at what our offense has accomplished and what our defense has allowed our opponent to accomplish in terms of: 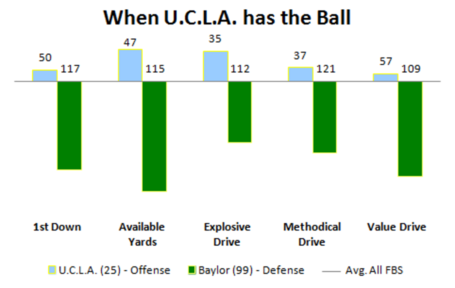 Well, let me say what you're all thinking – Baylor’s defense sucks. Granted, they’ve done enough to (somewhat) slow two ranked teams, but typically they give up a lot of points. There has been improvement in their pass rush and creating turnovers, but I think the biggest concern we have is that this team believes in itself and is riding high after a strong performance on a tough stretch of games to end their season.

Unlike with other teams we’ve faced, there is nothing specific to point out here – we dominate in every aspect of the FEI. Baylor isn’t even close to average in a single category. Absent our players having a hangover (or, more probable, conservative play calling) we should score easily. Franklin, Fauria, Hundley, Evans and the bunch should have a field day. 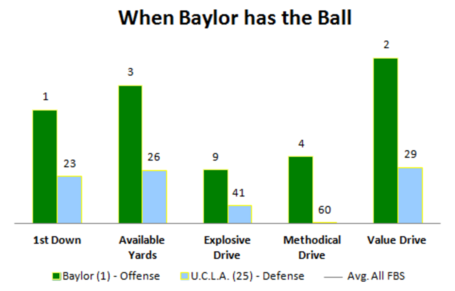 Yikes, I don’t think we’ve seen a disparity like this where our defense is concerned. Not only is Baylor #1 in FEI offensive efficiency, they also rank first in total offense (579 yards/game), have the top receiver in the nation, Terrance Williams (1,764 total yards), and the #3 passer, QB Nick Florence (4,121 passing yards).

I usually don’t look too much at total yards, as it can be very misleading on its own. But in Baylor’s case, their impressive total yardage is backed-up by an efficient offense, which means it turns its yards into points.

Another positive is that Baylor’s offense is somewhat similar to ASUs and Arizona’s (and to a lesser extent Southern Cal’s), which means our defense has the potential to match up against it fairly well. So… 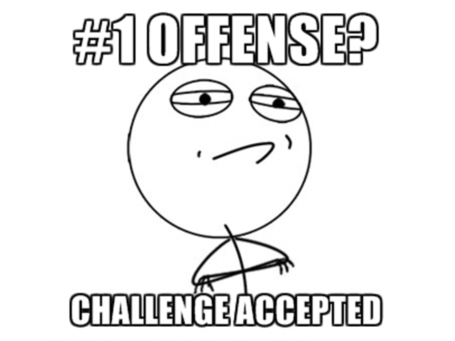 Finally, on to what has been our most inconsistent unit, special teams. Any given Saturday we could block three kicks, or muff three returns. 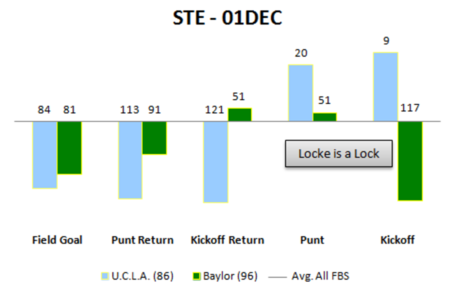 Hopefully the game doesn’t come down to Special Teams. Jeff Locke is the only reason we’re ranked above Baylor in STE, and even then we’re not too far above them. The solution is easy: whoever’s fielding punts/kick-offs – hold onto the ball; offense – score a lot; defense – don’t let them score. That way Locke can do his thing and the rest won’t matter.

VERDICT?
Here is how the FEI has done at predicting our games so far: 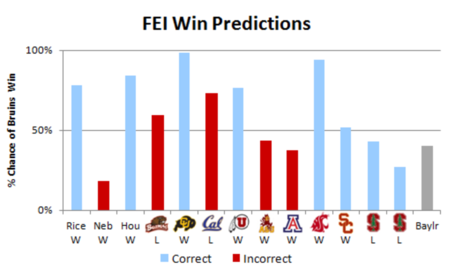 The FEI gives us a ~40% chance of beating the Bears this week, which is comparable to the chances the FEI gave us against ASU, Arizona and Stanford (the first time). 40%? Obviously, that’s complete bollocks. The FEI was wrong the last time we played the Bears (of the California variety), and will be wrong again as we face these Bears (of the Texas variety). U.C.L.A. defense will step up and the Bruins will win decisively. #WeOwnLA, and #WeOwnSanDiegoToo.

(And in case you haven’t noticed, regardless of what the numbers say my verdict is always a U.C.L.A. win.)

Holiday Bowl tickets reserved? Check! Email sent to Mexi for a kick@$$ BN tailgate? Check! Looking forward to meeting up with some BN peeps and enjoying this win – Go Bruins!