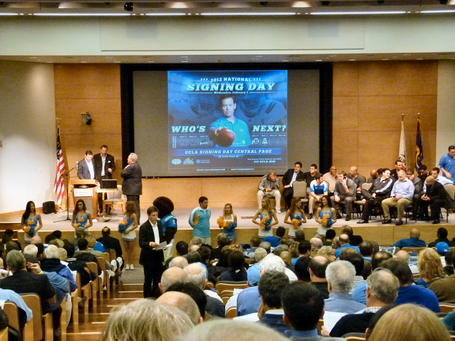 After a great day of recruiting, Jim Mora's coaching staff assembled at Korn Convocation Hall on the UCLA campus to formally announce the 2012 recruiting class. In attendance for this occasion was none other than the great, legendary, and fellow Bruin, Rafer Johnson who got a well-deserved standing ovation:

Additional video after the jump.

Chris Roberts introduced Coach Jim Mora to start things off. Coach Mora gave credit where credit is due, noting specifically the efforts of Director of On-Campus Recruiting, Pat Girardi and recruiting intern, Matt Bernstein. In describing the type of players they looked for, Coach Mora said, "We want some tough suckers in here."

Coach Angus McClure sort of MC'ed the evening and introduced Noel Mazzone who announced the two new quarterbacks (TJ Millweard and Devin Fuller). Quotable: "[Through all his years of coaching he learned] I am a really good offensive coordinator . . . when I have a really good quarterback."

Next up was Adrian Klemm who announced the new offensive linemen (Carl Hulick, Simon Goines, Colby Cyburt, Lacy Westbrook, and Alexandru Cheachir). One of the things Klemm mentioned was being able to sign Simon Goines with "big time" football. UCLA - big time football? Who knew.

At the end of the video, Klemm passes the microphone to "Mini-Me," aka running backs coach, Steve Broussard. That video and more will be posted later.