I was watching CNN International one night (ok, it was actually my father-in-law's choice), and an ad came up for a segment called "African Voices".

I looked up, and being interviewed was none other than our Prince, Luc Richard Mbah a Moute. Unfortunately it was only a teaser and not the full program itself, but I did find the article on CNN's online edition.

You gotta love the title: From African prince to king of the NBA.

I think most of us are familiar with Luc's story, but it's always nice to catch up with our prodigal sons. I'm sure we all miss Luc, no one more so than Ben Howland. 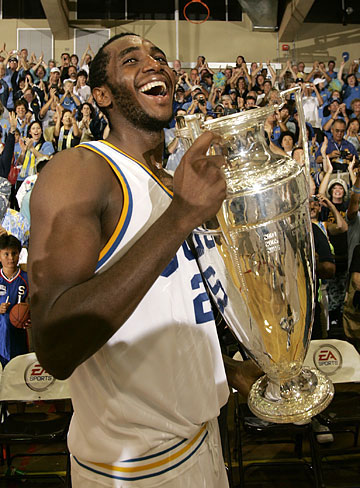 Here are a few snippets from the article, which I encourage you to read in its entirety.

Luc is still humble, despite his princely status:

Describing his upbringing, Mbah a Moute is quick to point out that it was far from luxurious, calling it "regular middle class."

"When people hear you are a prince they think of Eddie Murphy and [1988 movie] "Coming to America," which is totally not true," he explains. "My dad is just the chief of my village, it's not like Zamunda or the crazy things you see in the movie -- I don't have my face on the money but you get treated with respect and have ceremonies."

Luc is a stud defender, I think Howland still has a shrine to him somewhere in his office:

He is the lynchpin of the Bucks' defensive play and widely regarded as one of the league's best players to counter opposition threats -- Mbah a Moute has so far guarded everyone, from towering forwards like Kevin Garnett to shorter scoring machines such as Dwyane Wade.

Luc is grateful to UCLA fans:

"There was another guy on the team from Cameroon and the fans were so good to us and they created the 'Cameroon crazies,'" he recalls. "They had flags and T-shirts and one time they came out with a shirt -- 'Moute kicks Boute' -- and then next year everyone starts wearing that and I was like 'wow.'"

And of course, Luc is an Optimist:

"There is a lot of potential in Africa, athletically, intellectually," he says. "You've got a lot of different people and they need to understand that they have a lot of potential and can do great things and moving forward to becoming the Africa of tomorrow."