We have had multiple fan shots about this already but it's worth to talk about it prominently on our home page. tWWL did a wrap of 2011-12 college basketball recruiting season this week and according to their "pundits" Ben Howland's UCLA basketball program reeled in the number 1 recruiting class thanks to not so surprising signings of Shabazz Muhammad and Tony Parker this spring. You can watch tWWL's Dave Telep and Paul Biancardi discuss here why UCLA got the nod as the No. 1 recruiting class over Kentucky (which I am sure put few Kentucky fans over the edge).

Not surprisingly Shabazz Muhammad is leading all the hype around this class:

2. Shabazz Muhammad (UCLA, small forward): The explosive wing shook the Pac-12 when he chose UCLA on signing day. He's currently projected as a top-three pick in multiple 2013 NBA mock drafts, but before he goes pro, Muhammad could restore UCLA to a prestigious post in the Pac-12 and on the national scene. The Bruins didn't possess a consistent offensive catalyst during their tumultuous 2011-12 campaign. They have one now.

Meanwhile, national college hoops writers around the country already have the Bruins locked in their pre-season rankings, having the Bruins as high as the number 3 spot in some list. Let's do a quick recap of them after the jump.

It was SI.com's Luke Winn who listed the Bruins at number 3 in his pre-season rankings:

The One-and-Done Era has forced preseason rankings to become spectacularly speculative, given the influence elite freshman playing for elite teams are bound to have on the national title race. The Bruins' position is based mostly on the arrival of the Class of 2012's best two wing prospects, Shabazz Muhammad and Kyle Anderson, who rank Nos. 2 and 3 among all incoming freshmen.

THE SKINNY: Basketball is officially back in Westwood. Ben Howland put together an elite recruiting class to once again make the Bruins a Top 10 caliber team. Point forward Kyle Anderson joins scoring wing Shabazz Muhammad and knockdown shooter Jordan Adams along with burly big man Tony Parker to give UCLA the pieces it needs to get back to prominence. Howland is also high on point guard Larry Drew, who sat out last season after transferring from North Carolina. David and Travis Wear also return, as does monstrous center Joshua Smith and reserve forward Anthony Stover.

ESPN's Andy Katz had the Bruins at the number 7 spot calling us the "most fascinating" team of 2012-13 (emphasis added):

The Bruins might be the most fascinating team of 2012-13. How will this all shake out? Not only is the embattled Ben Howland bringing in the No. 1 recruiting class led by a pair of top-five players (guards Shabazz Muhammad and Kyle Anderson) and an elite big man (Tony Parker), but also UNC transfer Larry Drew II, who left Chapel Hill in controversial fashion. And who knows what you'll get with a frontcourt that includes the Wear twins and the enigma that is Josh Smith. Tyler Lamb and Norman Powell will also play significant roles. This has a true boom-or-bust feel to it. Nothing less than Howland's job security rides on it.

Boom or bust. That sounds about right. BTW if anyone missed the ESPN hoops page yesterday, here is a screenshot: 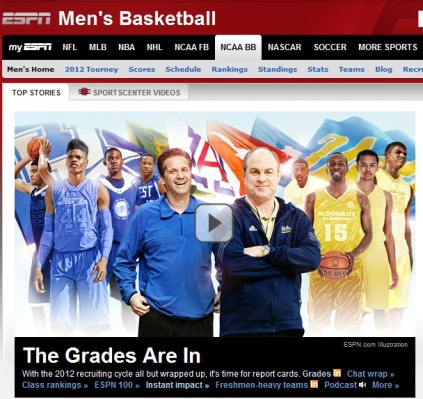 So all this hype is fun. But none of this is going to matter if Ben Howland doesn't put together a wire to wire top-10 season, a dominating Sherman's March through the Pac-12 conference putting UCLA in position to grab a protected seed in the Western Region. Everything is lined up for Howland to make a legitimate run for number 12. There are no excuses left (the goodwill from a huge chunk of the fanbase is long gone) for Howland if he doesn't get it next year.

No one here is going to be caring for pathetic pleas of one more season, if Ben Howland's program puts together an inconsistent 20-24 win season, playing ugly basketball with zero commitment to fundamentals and defense, and then flaming out before the Final-4.