It just makes sense. It's unbiased and based on data, an approach we like here on Bruins Nation.

I can't stop linking to them, and hopefully my numerous hat tips and compliments will be enough gratitude for letting us use their material. They have provided some great context and insight, when discussing the effects of coaching on W-L records, and when showing programs' effectiveness in getting players to the NFL as it relates to recruiting rankings.

With the 2012 season approaching, it is worth taking a look at their predictions. For the 2011 season, they weren't far off: their analysis came up with a 5-win season for UCLA (we had 6), down from what should have been 9 wins due to the negative coaching effect from Rick Neuheisel. One made FG from ASU and they would have been dead on.

So, follow me after the jump for a quick look at their analysis for 2012.

First off, let's take a look at their 2012 recruiting analysis, which is really the basis for a lot of their work. As you can see here, UCLA did quite well in 2012, ranking 14th, with only Stanford and U$C ahead of them. If you think that's a fluke, think again. UCLA's average ranking for the last 4 years is 15th, better than Stanford and Oregon.

Anyway, here is the 2012 prediction for UCLA. If you went by recruiting alone, UCLA would have 11 wins, as only U$C has done better in that respect. But we all know that is only part of it.

They add one loss due to a "field adjustment", i.e. an away game, which is Cal (they actually have one more against Stanford but I think that's a mistake as that game is a home game for UCLA). That brings it down to 10 wins.

They add one more loss due to the new coach, something that is a bit difficult to gauge but not unreasonable.

So, we come out to 9 wins (or 8 if you count the Stanford loss), which is pretty much the baseline we have set ourselves. Except, we will not accept a loss to U$C under any circumstance. In any case, I encourage you to delve into the data if you're into that sort of stuff, as they cover strength of schedule and other parameters that make this a reasonable prediction.

One point of concern is our 2011 recruiting. Check out the graph below: 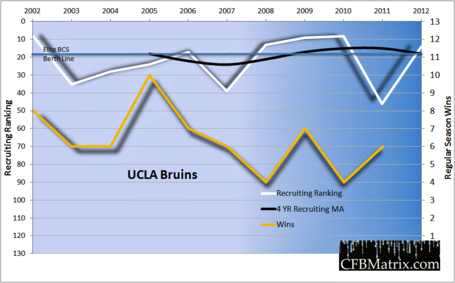 Bottom line: the table is set for Coach Mora. We're not the only ones who think so.