Share All sharing options for: UCLA Basketball In China: First (Hand) Impressions - FUSC Even In Beijing

Great post from Ganplosive from our comment thread. Huge thanks to him and other Bruins who are traveling with the team. GO BRUINS. - BN Eds.

Overall, the night was very relaxed and all the players and staff members were able to come out to say hello to those of us that were able to make it out tonight. Though UCLA tried, but the amount of people that came out to the meet-n-greet was shockingly low. I'd say in total a good 30 people came out, and I was able to peek at the list of guests and their requested tickets: I'd be surprised if we break 200 people showing up to support UCLA. There has GOT to be more bruins in Beijing than this, and I feel personally that it was on the marketing department for not promoting it right. Nonetheless, I expect the amount of Bruins in Shanghai to outnumber our own here in Beijing.

The night opened with a very brief introduction and talk by CBH, introducing each of the players and then Commissioner Larry Scott took the stage to explain how the Pac-12 intends to do this annually, with teams from each of the member schools sending teams out and, in exchange, receive college teams from China. Furthermore, talking with Commissioner Scott, it turns out that each TEAM (UCLA Basketball, UCLA Gymnastics, Cal Water polo or Oregon Track whatevers) can only come across the pacific ONCE every FOUR years. Which means UCLA basketball won't be making a similar trip in the foreseeable future. When asked about football... the answer was that 1. Football is doing well enough as it is 2. The Chinese don't really know American football, and 3. The lack of facilities. There are no plans for Pac-12 schools to play seasons games against each other overseas, so the primary purpose of these visits is really just for cultural exchange and goodwill.

Other than those tidbits, the night was really just about getting to know the staff and squad whom were all very courteous and friendly. Unfortunately, most of the players retreated to their rooms to rest after a long day (6 AM) on the Great Wall and the Forbidden City, as many of them were still getting a little strung on jet lag. Spirits seem to be high, though many of the players seemed to be a little culture shocked (good and bad).

I was able to talk a little bit to Joshua Smith at the side, and he seems to be really enjoying himself. A little chat with him revealed that last year at Maui, Duke had a couple games under their belt during the tournament while many of the other teams were still in vacay mode. He seemed excited about the chance to use this opportunity to bond with the team and to get a little court time. All in all, excited to be here in China and seeing the world.

Something interesting while talking with CBH revealed that he had to cancel the scrimmage with Tsinghua University after seeing the practice facility. Not only was it dirty, and unkempt, but the facilities were outdated and some he deemed unsafe. The move is said to protect our players from unnecessary injuries and also, to give the fellas a little more time to rest and adjust. The game is set to occur tomorrow night at 7:30, luckily in an actual court. So there should be no problems regarding dangerous facilities. Later talked a bit about the Final Four years and where many of those players are now at. All in all, very casual and relaxed.

Someone mentioned above wondering about Tony Parker's situation, and it's explained that Tony Parker came out to Beijing with his family (also note his different colored shirt compared to the rest of the team).

Last but not least, UCLA footed the bill for a fancy feast (plus red, white, and cocktail wine lolol). The players seemed to be bonding well, since traveling in a foreign land puts everyone that much closer together. The impression that I got was that many of these guys are really here to have a good time and see the world. I'd say this trip will open many more eyes for these young Bruins in the years to come. 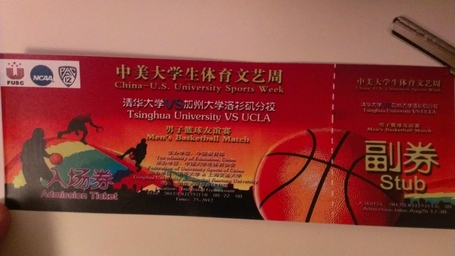 The NCAA and the PAC-12 along with F'USC presents - UCLA vs TSINGHUA. Yes, that's right, even in China, F'USC.

Will do what I can to bring more updates from the game!