UCLA Left in the Dust in Pac-12 Athletic Facilities Race

Share All sharing options for: UCLA Left in the Dust in Pac-12 Athletic Facilities Race

I hate to give Trogans any kind of credit. I really do.

But if there is one thing that Southern Cal does well, it is to take care of its football program. Which in turn allows them to take care of their whole athletic program.

Yes, they do cheat at times often in order to justify their investment in that program. Unfortunately, as we can see in their preseason #1 ranking, it seems the punishment was far from severe enough, which really tends to show that it is worth it to cheat (if you have low morals). That's a discussion for another time.

In case you missed it, you should go back and read Odysseus's post on Pac-12 facilities to see where UCLA stands in the conference. It's not a pretty picture.

And the picture just got far bleaker. Follow me after the jump.

Here is a video tour of the new McKay Center:

Yes, suck it up and watch it, because you know what? It's freaking amazing. And it now makes UCLA (and even some pro teams) look like a decrepit high school program.

You can mock it all you want, and I will, considering its reverence to known cheaters McKay and even Pete Carroll, and the fact that is conveniently leaves out any reference to OJ Simpson, OJ Mayo or Reggie Bu$h.

But the scary part? Now there are similar facilities at Cal, Oregon, Washington and Stanford. You can talk all you want about the excess of college athletics, but this is the new reality. And guess what: those are our main recruiting rivals.

The new McKay Center was announced in October 2010 and unveiled in August 2012. It cost $70 million.

What does UCLA get?

A "new" Pauley that cost twice as much and is nowhere near as nice.

A new turf on an 80 yard practice facility that makes Chianti Dan puff his chest, even though it took over a year to get it done after a "feasibility study".

Ridiculous looking uniforms that devalue our brand and tradition.

Sure, now there are rumors of a potential new football building. We'll believe it when we see it.

The truth is, since Chianti Dan's arrival, UCLA has fallen behind in just about every manner imaginable, in every facet of athletics. That is why it is absolutely crucial for Mora and Howland to succeed this year, to somewhat mitigate Chianti Dan's incompetence.

In the end, I leave you with this image, from the Southern Cal McKay Center: 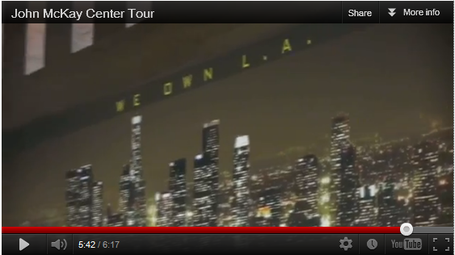