Share All sharing options for: The Trojan Billboard in Westwood – Not a Surprise in Block & Guerrero’s UCLA

So a lot of commotion around Southern Cal's billboard campaign around LA pimping Matt Barkley. Can't blame those guys for going all out to promote a Heisman candidate (even though he is an insufferable punk) in the second largest media market in the country and also out in NYC.

It also doesn't surprise me at all to find out that they went ahead and put one up right in Westwood. It eventually got taken down today after getting some attention in the national and local media (always looking for a shallow storyline). Honestly, can anyone blame the Trojans for being ultra-aggressive?

It's not like they have gotten any kind of resistance from our football program or on the field or also from UCLA administration's flaccid approach to this football rivalry stemming from total indifference from its checked out Chancellor and incompetent athletic director.

Remember it's the same UCLA administration who every other year has allowed this on the Rose Bowl: 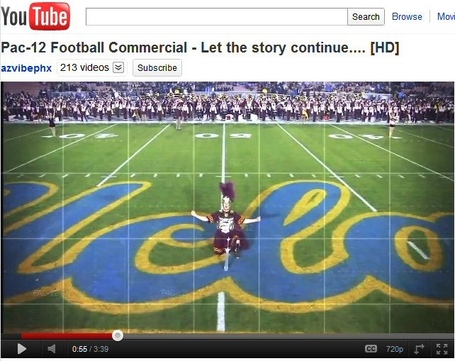 It's the same athletic department that looked the other way while Pac-12 included that footage in one of its inaugural commercials. They weren't forced to move on it until we brought attention to it here on BN.

It's the same athletic department has gone out of its way to crush an aggressive spirit towards rivalry v Southern Cal by phasing out "Beat SC" week.

It's the same athletic department that managed to turn the Rose Bowl into almost 60-40 Bruins/Trojans distributions when we have our home game compared to what often appears to be 80-20 distribution in favor of the other guys when the game is at the Coliseum.

So can't blame the Trojans for being ultra-aggressive. During Guerreros' failed tenure at UCLA they have gotten to walk all over Chianti's hapless athletic department on and off the field. They can afford to have an aggressive mindset full of swagger because their entire administration is fully invested in their football and athletic program. In contrast at least in last 10+ years there has been no sense of pulse of shred of Bruin pride coming out of Block/Carnesale and Guerrero's hapless bunch at UCLA.

All of this just underscores how important it is for Coach Jim Mora to not just win 8-9 regular season games but all beat the Trojans on the field. All that "culture change" rhetoric we have heard this off-season will not mean anything until Mora gets it done on the field.

Unless UCLA beats Southern Cal on the field we are going to have more of this BS all around LA, while we keep reading more worthless "word from Westwood" "blogs" from Chianti waxing poetic about 6-7 wins talking up some irrelevant bowl game in San Francisco, Las Vegas or El Paso or something.