UCLA football may have gone through some significant upheaval during this off-season, but some things continue to be the same. Chianti Dan and his incompetence continue to sour Morgan Center, Spaulding continues to be an 80 yard joke, and Adidas and Morgan Center continue to collaborate to put our Bruins in atrocious, cheap-looking, second-class football uniforms.

As you can see above, it appears the Bruins will be rolling out entirely new home and away uniforms, including a navy blue heavy alternate away uniform set. The original image source is unknown (presumably from a player or Morgan Center staffer posting it on Twitter or Facebook), but it has been seen in other places around the Bruin internet universe. Although there has been no official word from Morgan Center (to no surprise) regarding new uniforms (unlike real athletic departments and uniform providers who carefully plan a multi-platform multimedia campaign to build hype and excitement about new uniform releases), if you go to the UCLA Store online, you'll get confirmation: 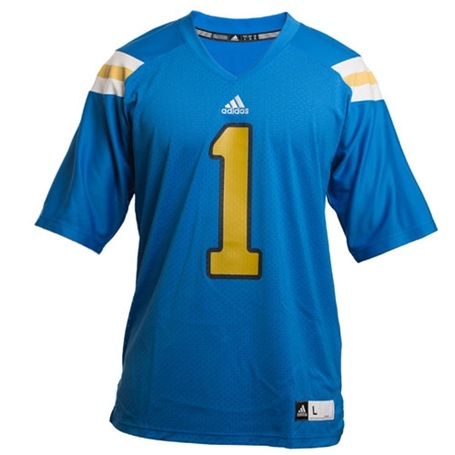 While these are obviously replicas and not the same game-day uniform, you too can own a lame, bastardized version of a once-proud uniform for a once-proud football program with cheap screen-printed numbers made from cheap polyester, all for the low price of $65. Who do these clowns at Morgan Center think they are fooling? It's pretty pathetic that, instead of a carefully scripted media campaign to build up hype and excitement for new uniforms, it's online communities like BN that are piecing together the information.

Let's talk about Chianti Dan and Adidas' continued total failures to provide adequate uniforms for the UCLA football program in more detail, after the jump.

Let's start, first, with a discussion of the failures of this new uniform. First, Adidas has still not managed to figure out how to give UCLA proper shoulder stripes (you know, the things called "UCLA stripes" since we're the school that originated the damn look), instead leaving our Bruins playing in a truncated joke of a shoulder stripe. Second, while the new number font isn't terrible, it's awfully boring. Why do we not go back to the Clarendon font that we've used dating back to the days of Red Sanders and Gary Beban? The uniform style worn by greats such as Cade McNown and, of course, DeShaun Foster: 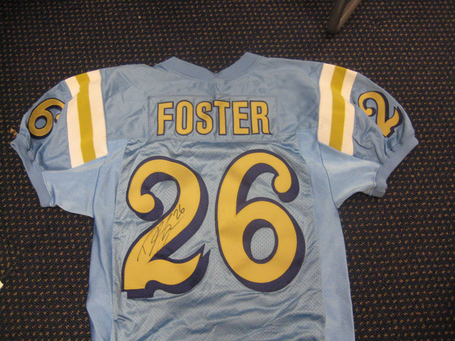 Moreover, our "gold" uniform pants have gone from being, well, gold, to some kind of muted nasty beige/mustard blend that looks dull compared to the bright gold of our helmets. It also appears that the Bruins will utilize the helmet from last year's all-white uniform from the U$C game in conjunction with their standard away white uniform (which is actually a pretty sharp look). The problem is the pairing with navy blue pants. We're not a navy blue school and the continued inability of Morgan Center to pick one shade of blue and stick with it is just pathetic and an example of the worst kind of brand unawareness. More importantly, it makes it look like we're trying to copy the same outfit worn by Cal, who ironically, debuted it against us last season.

The reactions across Bruins Nation were pretty stark and very negative. Among the front page crew, the latest cheap uniforms drew a chorus of boos. As AHMB noted:

We're UCLA. Our colors aren't commonplace, and our jerseys haven't been either. I liked our mid 90's look with our scripted numbers. They were unique. These are just ... Blah. I'll skip the UCLA stripe issue because everyone else will hit it, but the number font and outline are disgusting. We need numbers with character and an outline that matches. True blue jerseys with yellow shade numbers and yellow shade pants and gold helmets and lettering with navy outlines doesn't match. It confuses. And it bugs my eyes. If you're going to f*** up a jersey, at least make it match.

Focusing in on the disaster that are the "UCLA stripes" on these uniforms, tasser10 called Adidas out for the joke they've turned our uniforms into:

I like the white jerseys and the white helmet, but the color of the numbers is just plain wrong. They need to get rid of any navy blue that's there. It should be Bruin blue, with gold around it, and the pants should be sparkling gold, not beige or whatever it is they've done with the home jersey.

The stripes are an insult to stripes, and the fit reminds me of Tommy Boy doing "fat guy in a little coat". The Adidas tech-fits just plain suck as jerseys.

Nestor hit a home run, not just rejecting the tacky uniforms but hitting the nail on the head re: Morgan Center's total incompetence:

Both home and away jerseys look mostly atrocious and are an insult to the classic UCLA jerseys of yester years. I have always been on the traditional camp. I would have preferred we did not tinker with perhaps one of the most recognizable jerseys in college football just like the Yankees, Dodgers, Red Sox never tinkered around with their home and away jerseys. But I understand how changing things up is the "thing" do in CFB. That said it's shocking to see what they have done to our jerseys.

Our home uniforms make us look like the San Jose Spartans while our road unions make us look like the Cal Bears. The home uniforms look even worse from last year. I am somewhat ok with the white helmets. But would have made sense if they were introduced with the gold pants from just few years ago. Overall, it just another massive screw up on the part of Morgan Center as they continue to degrade the brand of UCLA athletics. Horrible.

Our Bruins' football uniforms has been a frequent topic of discussion here on BN, beginning with the 2010 transition from our regular uniforms, with true UCLA stripes, to the stretchy, God-awful fitting Adidas "TechFit" pieces of crap, which were panned for looking like second-rate, cheap uniforms in comparison. It was then that Adidas decided to scrap our iconic uniform look, ditching the distinctive shoulder stripes that the Bruins have worn since 1954. As UniWatch noted then:

But the saddest part was the team’s UCLA stripes, which were severely truncated and often distorted. I mean, come on, people — this is UCLA, the school that invented UCLA stripes, and you’re gonna leave them with this? That’s just pathetic.

That was followed up with a discussion about UCLA's football uniforms, especially in the age of multiple uniform sets, special one-game alternate uniforms, and Nike's new-uniform-per-week mantra for Oregon, giving Adidas and Morgan Center credit for rolling out the Gary Beban throwback uniforms, while suggesting the next step: throwback uniforms from the Aikman, McNown, or Jackie Robinson eras. Did anything like that ever happen? Nope.

Instead, while Adidas was busy developing multiple alternate and special one-game-only uniforms for Michigan and Notre Dame, Morgan Center was content to sit back and let Adidas treat UCLA like a second class program:

Unfortunately for us, Adidas still is doing a terrible job of promoting UCLA's brand. It's been discussed time and time again, but Adidas just doesn't seem interesting in promoting UCLA's brand, even in its stores in Southern California (whereas Nike is more than happy to pimp U$C, Stanford, and Cal all over the state).

So, you'll understand why I'm skeptical that Adidas will come out with anything at least half as cool as what they've rolled out for Irish and Wolverines. I know the majority of BN readers would rather switch to Nike. I mean, after all, this is the company that gives us second-rate practice jerseys, while Tennessee and Michigan get the good stuff. They've managed to tweak our classic basketball uniform, but worst of all, they provided our football program with cheap looking, totally ugly, pathetic looking uniforms that look like some high school drop-out at the strip mall screen-printer put them together. The total lack of respect for UCLA by Adidas is appalling. Perhaps our anger should be directed at the clueless chumps in Morgan Center, who don't seem to care that Adidas is giving us second-tier gear and not pushing for the best, like at Michigan.

Sadly, by September of 2011, things had not improved at all with UCLA's football uniforms. Meanwhile, various Nike schools were rolling out the same type of "next-generation" uniforms (which is tired, lame refrain we hear for why Adidas can't develop a true UCLA shoulder stripe due to the "new" material being used) that exposed Adidas and Morgan Center for being total chumps:

Good job Adidas and Morgan Center: you turned our iconic stripes into a joke. It'd be like Majestic botching the Yankees' iconic pinstripes. Of course, Adidas would have us believe that the new lightweight, stretchy material makes it difficult to properly create shoulder stripes (since they also botch it on NFL uniforms for the Colts, as Reebok is an Adidas owned company). Except Nike proves that's not true with LSU's Pro Combat uniform this season

Of bigger concern is the fact that UCLA is willingly passing up on not only a huge merchandising opportunity (alternate and one-game-only special uniforms fly off the shelves, as the Gary Beban throw-backs did in 2009), but also a major recruiting tool that even our own players have publicly lamented on Twitter.

And of course, when Morgan Center finally decided it was time to roll out an alternate uniform, they managed to completely botch it, rolling out an all-white alternate uniform for the UCLA-U$C rivalry game, traditionally played as a color versus color contest, pitting our powder blue and gold against the Trojans' red and yellow. To no surprise, the reaction was overwhelmingly negative, with the all-white uniform (an otherwise very sharp, good-looking alternate uniform) now being known as the "surrender white" uniform, following the 50-0 drubbing at the hands of U$C:

So, not only does Chianti Dan pick the ABSOLUTE worst time to roll these uniforms out, but he isolates the players from the decision-making process. He'd get away with it too, if Stanford didn't just flat-out show us how it's supposed to be done, with input from the players wearing the uniforms, and rolled out as part of a systematic, aggressive marketing plan that demonstrates strong brand identity and awarenss.

In other words, just another TOTAL FAIL by Chianti Dan and his tone-deaf staff of fools at Morgan Center. Just another glaring example of how these people at Morgan Center are unaware of our traditions (all the more infuriating since Chianti Dan should know as a fellow Bruin) and behind the curve, because rolling this uniform out at the end of the season just reeks of desperation.

Not much else can be said than that. Just another example of a complete and total failure by Chianti Dan and the tools at Morgan Center, failing to make Adidas give UCLA the respect it deserves (as they do with Michigan and Notre Dame) and allowing the shoe-maker to give us second-rate, lame garbage uniforms.