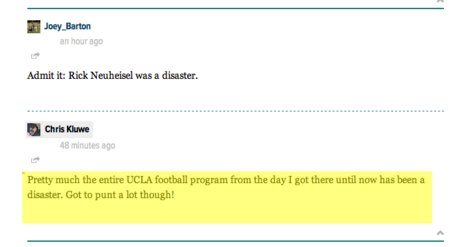 In case you missed it, (former) Bruin punter Chris Kluwe did a Q&A with Deadspin readers last night. A commenter posed this:

"Admit it: Rich Neuheisel was a disaster."

"Pretty much the entire UCLA football program from the day I got there until now has been a disaster. got to punt a lot though!"

Kluwe arrived at UCLA in 2000. So his "day I got there until now" spans the entire Dan Guerrero/Karl Dorrell/Rick Neuheisel era. He sums up that period with one word: "Disaster." And I can't say I disagree. Does anyone disagree? We can't hold Jim Mora to blame for the sins of the past, so here's hoping he can turn things around. On the other hand, we can hold Guerrero to blame -- he's the sinner. And when former players don't blink and call your program a "disaster" -- you're no longer on the brink. You've gone right over the cliff and just praying the landing doesn't kill you.