A Midsummer Night's prediction. Well ok it's Saturday morning, so what. With fall camp set to begin, we'd like to share with you our humble Pac-12 predictions for the 2012 football season. This is really just for fun and out of curiosity. Before any of our conference opponents get in an uproar, just know that we cannot possibly know everything about every team. But we think we know what is going on generally in the conference to make some educated guesses. We did pretty well last year, but things are a little more complicated this time around.

There are a few things that we know for sure about the Pac-12 this year:

This year, it seems pretty clear that there are two elite teams in the conference. Stanford is a bit of an unknown at this point, but most people still think Oregon will be tops, and that U$C will have a strong team. Last year, with U$C ineligible because they are pathological cheaters, UCLA won the South (despite what your t-shirts say, stupid Trogans), and had the privilege of getting pummeled by Oregon in the Pac-12 championship game after a spanking by U$C. So what's in stock this year? Follow me after the jump to find out!

Secondly, I am not going to provide the specific W-L results on all the games. That will be available in a follow-up post, and only for UCLA. There is just no way to provide all the results.

Thirdly, 11 of us frontpagers participated in this little poll, and the results are based on average win-loss record. Not a huge sample size, but there is no time to get everyone's opinion in the community, valuable though it may be. 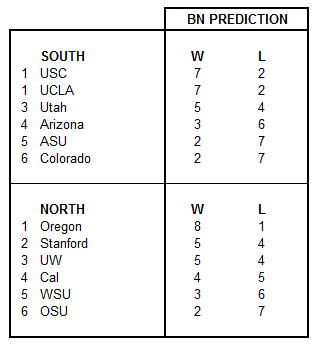 - 5 of us picked U$C to win the conference, while 5 others picked UCLA. The lone dissent was a pick for Utah.

- Once again, you can see we are die hard fans, as it seems we have picked UCLA to contend for the Pac-12 South Division title. This would almost certainly mean a nice bowl game for the Bruins. The low was a 4-5 record and the high a 8-1 record. Out of respect for anonymity I will not name those who made those picks :)

- As you can see, UCLA is tied with U$C for the South division title...you'll have to wait until the next post for the game-by-game breakdown and tie-breaker!

- As mentioned above, Oregon now likely stands alone in the division, given the big change at Stanford, which also opens the door for UW. .

- There is once again a big drop off after Oregon.

- Unfortunately, as most others, we see OSU and Colorado ending up in the basement. Personally I think WSU will surprise some people (hopefully not UCLA!). I just have that belief in Mike Leach, but it may be too soon still.