Make sure to tune into the massive west coast derby match between the Bruins and Gauchos tonight at 6 pm on Fox Soccer Channel. The last time we played up there they set a record for college soccer attendance. We also need to avenge our loss to them in the 2006 championship game.

Key question going into this match - does we try to play our usual possession-oriented short passing style? Or do we go cynical and bunker and play direct in a tough road environment?

"It is crazy," UCLA senior midfielder Ryan Hollingshead told TopDrawerSoccer.com over the phone earlier this week. "Battling the fans like that is not something we deal with every week, but we are excited about playing in front of that many people."

Hollingshead is one of eight current Bruins who played in that game two years ago.

"You don’t know what to expect going in there as a freshman," UCLA defender Joe Sofia, another returner from that game, told TopDrawerSoccer.com. "This time around, we are expecting a large number of fans. It is a really exciting feeling." 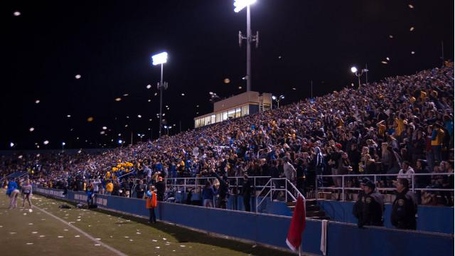