This weekend’s game gives us a shot at redemption after last year’s back-to-back losses to Stanford, the second of which dashed our hopes of returning to the Rose Bowl and led to an embarrassing blowout at the Holiday Bowl.

Here we’ll take a look at how Brian Fremeau’s Efficiency Index (FEI) sees these teams. The FEI is an advanced statistical measure that uses "each of the nearly 20,000 possessions" each season to track drive efficiency (vs per-play success), and rates a team’s efficiency, or how successful a team is at maximizing its scoring opportunities while limiting its opponents’ scoring opportunities. 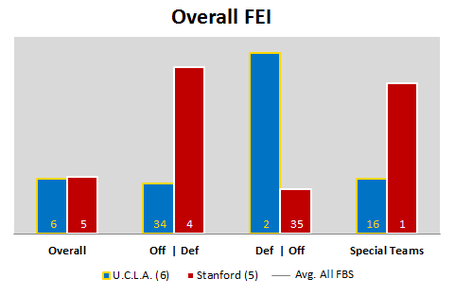 As I mentioned in Tuesday’s mid-season Trajectory Update, U.C.L.A. fell one spot this week to #6 in the FEI after a less than dominant showing against Cal. Stanford also fell, but landed above the Bruins at #5. So… overall the FEI sees the two teams as pretty much equal.

The graph clearly shows this game to be a defensive battle for both teams, and Stanford will be the most efficient defense the Bruins have faced thus far. Sure, our offense may be a little more efficient than theirs, and our defense, as well, but their special teams are a whole lot more efficient than ours. This isn’t to say ours are bad, we’re still ranked #16, but Stanford is ranked #1, and I wouldn’t be surprised if this game is decided by special teams play.

Now, let’s take a closer look at the components that make up the offensive and defensive efficiency ratings. These measurements consider what our offense has accomplished and what our defense has allowed our opponent to accomplish in terms of: 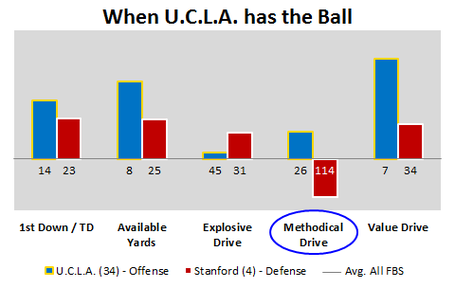 On the face of things, this graph looks good, right? Most of our blue bars are above Stanford’s red, and bigger is better. However, the graph is a little misleading; the figures used here (as opposed to the "Overall" FEI chart above) represent raw data before it’s been adjusted for strength of schedule (SOS).

Some say Stanford’s defense has underperformed, but I think any struggles they’ve had this year can be laid at the feet of their offense. Still, I think where their defense is exposed is in the Methodical Drive category (drives with 10+ plays), where, even after adjustment, Stanford is clearly vulnerable.

U.C.L.A. needs to chip away at Stanford’s defense with screens and draws, taking yards where it can. It’s what we did to them last year at the Farm, and what Utah did to them last week. If we couldn’t establish a run game against Cal, it’s not likely we’ll do much against Stanford’s front seven (Perkins, Jones, get it done!). But we can spread out the field and take small chunks of yards on the outside, establishing long drives and wearing down their defense. 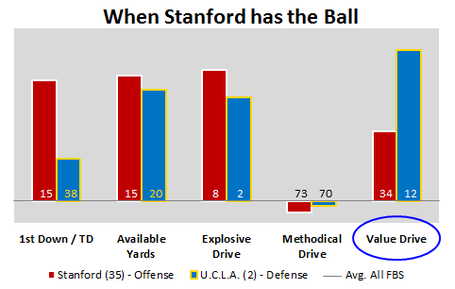 Anyway, look at the Value Drive disparity above. Stanford’s Shaw seems to be a time of possession and field position guy, but their offense has just not been performing. Stanford hasn’t gotten much done through the air, and if the Bruins can shut down Stanford’s Ty Montgomery, we should be able to stack the box and let Anthony Barr do what he does best – punish quarterbacks. Get 'em off the field, and then it’s our turn to wear down their defense.

Another stellar defensive performance is key to the U.C.L.A. offensive strategy described above. If we can’t keep Stanford off the scoreboard, we may just find ourselves running out of time (a la last year’s championship game). We’ve had games this year where we’ve needed to rally in the second half to win, and to do that we’ll need explosive drives. If we’re forced into this position, I’m doubtful that Stanford’s pass rush will allow us to get the yardage and points that we need. That said, we’ve outscored opponents 71-0 so far in the 3rd quarter, so maybe it doesn’t even matter… 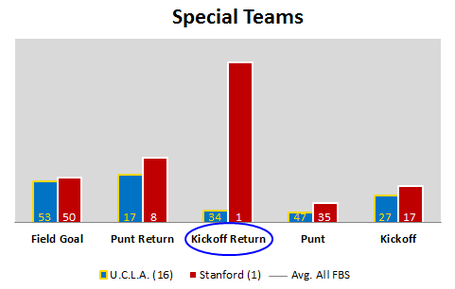 You really could have skipped everything above and just scrolled down to this graph. This is what the game will likely come down to, special teams play. One could argue that Stanford’s win against Washington would have been loss, and the loss against the Utes wouldn’t have been so close, if not for its special teams play.

In both games Stanford had a kickoff returned for a TD. Ty Montgomery, as Bellerophon notes here, is averaging 37.2 yards per return and has two returns for a touchdown. Ty is a big part of Stanford’s #1 Kickoff Return rating above (and their #1 overall Special Teams Efficiency rating), and U.C.L.A. will need to keep him in check the whole game. I think I saw that he was leading the conference in all purpose yards?. Against the Utes, I’m pretty sure he went end zone to end zone.

On our side of the ball, we all remember how last year’s championship game ended, with a questionable call from Coach Mora for a low probability field goal attempt. As Nestor notes here, Ka’imi seems to have put it behind him and has right attitude about his 52 yard miss from last year’s game. At any rate, let’s hope we take care of business early and it doesn’t come down to a field goal (and if it does, hopefully not a 50+yarder in the rain). 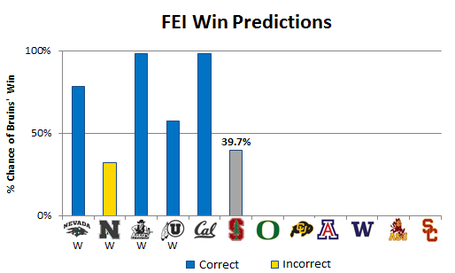 The FEI has been correct in 80% of our games this year, and gives us a 39.7% chance of winning this weekend’s game. This will be a tough game, no doubt; Stanford came close to beating Utah, and they didn’t need six interceptions to do it. But… the last time the FEI predicted against the Bruins (Nebraska), it was wrong. Just sayin’… U.C.L.A. wins (by more than a field goal) and breaks Stanford’s 12-game home winning streak.