Well, it's not the Rose Bowl, and missing the Pac-12 Championship game was a bummer, but the Sun Bowl should be a fun game between two teams meeting for the first time in their programs' proud histories.

I don't know much about VA Tech, but I do have a buddy who went there, and no matter how good his Hokies are he always watches them with a nervous eye, knowing full well that they have an uncanny ability to drop any game, no matter how far ahead they are on the scoreboard. Given the Bruins' performance of the past decade, I can empathize. I will need to see much more consistency from this team to overcome the uneasiness I feel whenever we play a ranked team (or even a disciplined and well-coached team).

Another thing I remember about the Hokies is that Stewart Mandel grouped them, along with the Bruins, as "Barons"in his program pecking order of college football (a divvying up BCS programs into a four-tiered feudal society). Barons - not quite "Kings," but more established and prouder than "Knights" or mere "Peasants". 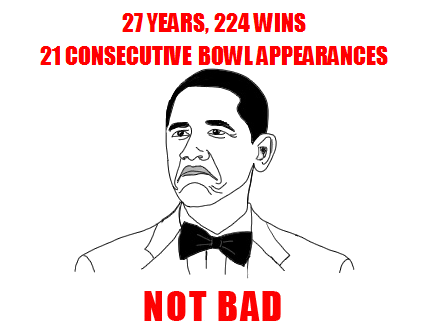 With this empathy and shared football heritage, I respect the Hokies - and hope that we decisively beat them on December 31. A 10-win season isn't enough to overcome the humiliation and tarnish of last year's Holiday Bowl, but it's a necessary step on this team's journey back to football's elite. I'm excited about the game, and it will be great to see those U.C.L.A. stripes one last time this season (albeit, on VA Tech's uniforms).

So, let's take a look at how Brian Fremeau's Efficiency Index (FEI) sees these teams. The FEI is an advanced statistical measure that uses "each of the nearly 20,000 possessions" each season to track a team's drive efficiency (vs per-play success). Basically, the FEI looks at how successful a team is at maximizing its scoring opportunities while limiting its opponents' scoring opportunities. At the end of the 2013 season, here's how these teams compare: 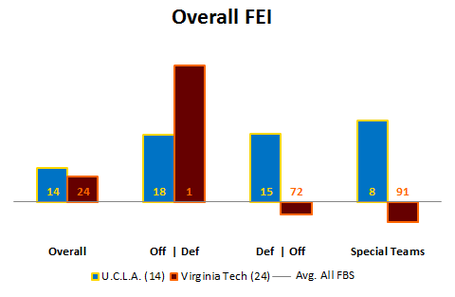 Overall, the Bruins field a better team, ranked 14th in the FEI to the Hokies 24th. The story here, though, is obviously VA Tech's stalwart defense. While Tech's offense, clearly, isn't very good, its defense might be the best in the nation.

The FEI certainly thinks so, ranking Tech #1 out of all FBS teams. For reference, Stanford, who we (AGAIN) lost to in a very winnable game, is ranked #2 in defense. Southern Cal is ranked a respectable #6. Bottom line - assuming we keep things lively on offense like we did against the Trogans, and don't revert to conservative, vanilla play-calling, we should be able to score enough to win this game handily.

Now, let's take a closer look at the components that make up the efficiency ratings. These measurements consider what our offense has accomplished and what our defense has allowed our opponent to accomplish in terms of 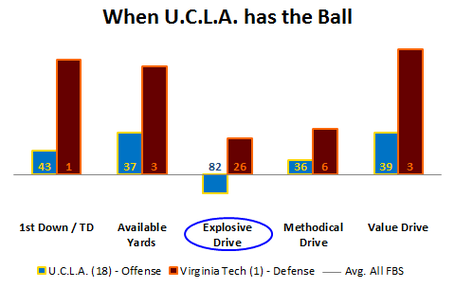 As a reminder, the figures here are raw and not adjusted for SOS. If they were, you'd see our blue bars come up a fair amount (from #28 to #18), and the maroon bars go up even higher (#4 to #1). Yes, maroon. I'm not a big fan of burnt orange (sorry, Texas), but burnt orange AND maroon has to be the worst color combination in college football. Allegedly the colors were chosen by university officials because they created a unique combination and were "not worn elsewhere at the time." Yeah, there's a reason for that. And we should win on color scheme alone (despite Adidas' hack job). But I digress...

Our offensive line is extremely young and will have to play out of their minds technically to give Hundley time to make plays. The Hokies have a very experienced defensive front that will create tremendous pressure, which will make it extremely difficult for us to settle into any sort of rhythm. This will be a great test for Hundley and his decision-making.

And this is likely the best secondary the Bruins' have seen all year. The Hokies pass defense held Alabama to 110 yards on 10 completions, a season low for the Tide. The Hokies have intercepted 19 passes this season, tied for 5th in the nation (ASU is #3 with 21, 1 of which was against us).

The Hokies have, however, had problems this year with mobile quarterbacks, so hopefully Hundley can recreate some of that magic he had against Southern Cal (two rushing TDs, no big deal...). Still, with a month to prepare, I'd imagine they'd shore-up this small chink in their defensive armor.

Interestingly, our weakest area on offense also happens to be the Hokies weakest area on defense - the Explosive Drive (% of drives that average 10+ yards per play). Even though this is our weakest area, it does have the smallest delta when compared to VA Tech's strengths, so is an area to try to exploit. Get the ball in our playmakers in creative ways. If we can establish a running game with our committee of backs, Hundley should be able to get some deep passes in; also, a great opportunity for Evans to bounce back after a less than stellar game against Southern Cal.

At the Sun Bowl teleconference, Mora guaranteed that "UCLA is gonna put on a great show for you and you're gonna love having us there." I hope that show includes a dynamic, exciting and productive offense. It's time for Mazzone to get creative and stay aggressive with a balanced attack.

We've suffered from some questionable play-calling this season, but I suspect that even if our offense stalls out, our defense and special teams play will win the game for us. Still, a convincing win coming from solid play on both sides of the ball would be nice. 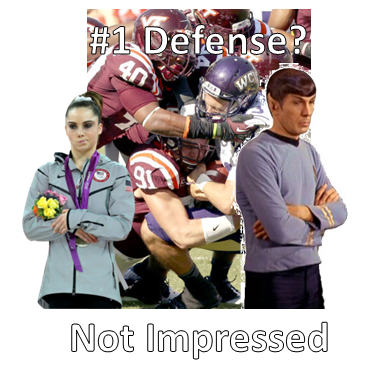 Okay, I am impressed with this defense, but we got this. I mean, look at what happens when VA Tech gets the ball... 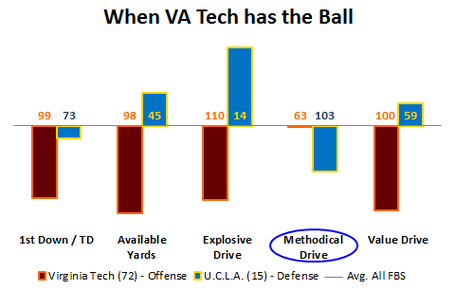 ...absolutely nothing. The Hokies offense this year is as worthless as Jim Mora's boss. Its offensive efficiency is only just better than Colorado's. Adjusted for SOS, U.C.L.A.'s offense rises substantially (#42 to #15). VA Tech's rises a decent amount (#92 to #72), but is still anemic. Outside of ‘Bama, we'll be the toughest defense the Hokies have faced.

VA Tech has had some bad luck this season with the injury bug, including losing Trey Edmunds, their starting running back, to a broken leg. Additionally, they have 5-7 freshmen starting, which, unless they all play like Myles Jack, is a problem.

Tech's QB, Logan Thomas, is a converted tight-end who stepped into the role as a first year starter in 2011 and has been anything but consistent since. He's a big dude at 6'6" and 260+ pounds, and he led the team in rushing last year. With their starting RB gone I suspect he will be relied on to use his legs this game.

While he can run, he is inconsistent throwing and his accuracy isn't great. With 13 interceptions this season (and 14 last year), Logan's affinity for turnovers is almost as great as Guerrero's (although Dan's is of the apple variety). Taking advantage of this will be key for the Bruins' field position battle against a defense that will give us little room to score.

The one bright not embarrassing area on VA Tech's offense is its Methodical Drive (% of drives that run 10+ plays). Coincidentally, that's also U.C.L.A.'s weakest area. We're not great against the run, so look for the Hokies to grind out short yardage plays on the ground and short passes in the middle. Tech has some good route runners in Josh Stanford, Demitri Knowles, and Willie Byrn, and if Thomas' erratic play happens to be on an upswing this game, they could do some damage with short and mid-range routes. Barr and Marsh need to keep pressure on Thomas and keep him from getting into any sort of rhythm. 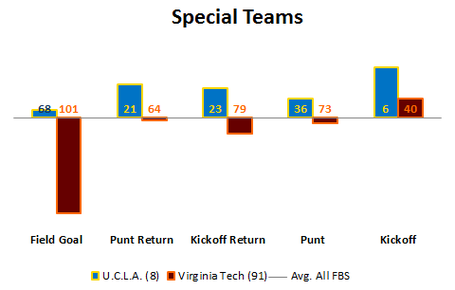 VA Tech's special teams play is riddled with mistakes. We have Ishmael Adams 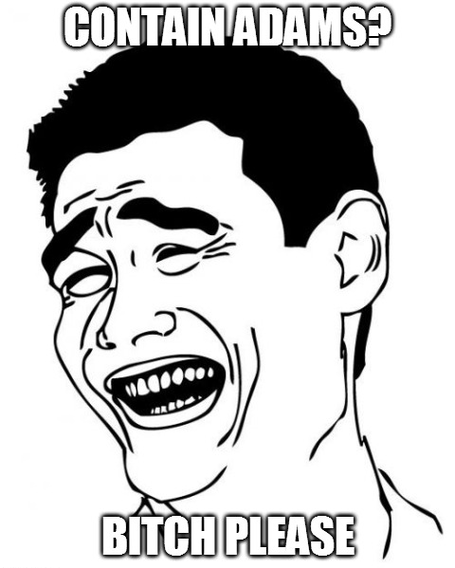 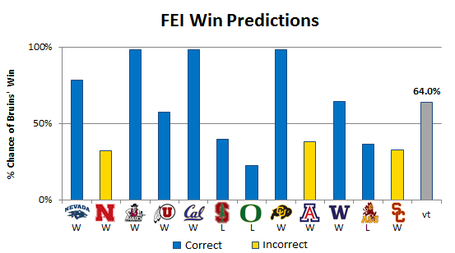 The FEI has been correct in 75% of our games this year, and says we win against the Hokies 64% of the time.

I think regardless of how our offense performs, we should be able to win this game. If we can exploit the turnover issues Tech's had this season, our defense and special teams play should carry us. Having the offense show up and produce, however, will go a long way toward convincing me Mora has this team ready for a break-out year in 2014. 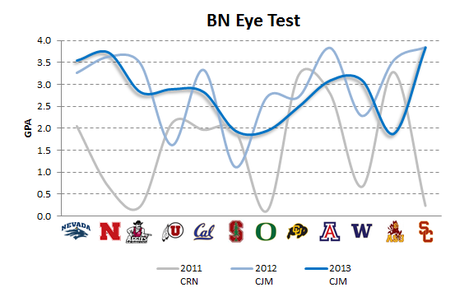 According to the BN Eye Test, 2013 actually had a slightly lower season GPA than 2012 (2.85 vs. 2.95, respectively), partly driven by a 0.55 decrease in our offensive play calling. The progress we do see though is in terms of consistency from game to game. But we're still too volatile to be elite, and we can't have those troughs we see against good teams like Stanford, Oregon and ASU.

Our first 10-win season since 2005 would be great, but I sincerely hope Mora takes advantage of this opportunity to set the tone for the future of Bruin football. If he has this team focused, I have no doubt we'll be going into New Year's with a lot to celebrate.