Gottlieb Criticizes Walton, Makes Ass out of Himself

Share All sharing options for: Gottlieb Criticizes Walton, Makes Ass out of Himself

As you have probably seen through various outlets, the MSM has picked up on the Bill Walton rant about Howland during the Washington game and has been busy trying to reassert its pathetic narrative about UCLA Basketball. The narrative has been thoroughly debunked by Tracy Pierson and by Bruin Blue, who finally drove a stake into what is turning out to be somewhat of a campaign against UCLA. Why, our very own Daily Bruin even followed the herd with a terribly written and misguided article.

As if on cue, one of the tools behind this narrative is piping up, only to reaffirm what Tracy and Blue's post so clearly demonstrated. That tool is none other than Doug Gottlieb. You should remember him as he was mentioned in Blue's post:

Doug Gottlieb, who very much wanted to go to UCLA, but was passed over by them, and has never let it go. Gottlieb's scorn of UCLA is evident in every comment he makes about the program.

"Their chemistry is dicey," Gottlieb said. "And it's not helped by Bill Walton."

What a load of crap, to begin with. That a commentator's comments affect team chemistry. Granted, Walton is a prominent alumnus. But does that mean commentators cannot criticize a team or coach? How ridiculous.

On Walton's comments, Dougie had this to say:

"It was unprofessional, clueless and uneducated."

Unprofessional? A commentator's profession is to...comment. What should they be called then, cheerleaders?

Clueless? A UCLA legend is clueless about basketball at his alma mater? More clueless than a reject who never went there? Please.

Uneducated? You can call Walton many things but that is the last thing that comes to mind.

Here is probably the most idiotic comment of them all:

Gottlieb said a big reason UCLA isn't drawing well (it's averaging only 7,759 in renovated 12,829-seat Pauley pavilion) is the nature of the area.

"You know why no one's in the stands? Because every game is on TV," Gottlieb said. "The Washington game was a 6 p.m. local start. No one goes to college basketball in southern California."

Well, according to Mr. Honest & Fair Commentator Dougie, it doesn't matter how the team is playing...people won't come because they can watch on TV! Why, we are so lucky in Southern California, we have TV! All dem folks in North Carolina and at Duke don't got one o' dem TV's, so they've gots to go see the game in person. Heck, that's why Cameron is packed every darn time. Shoot.

No one goes to college basketball in southern California. Pauley wasn't packed from 2005-2009, or during Harrick's runs. L. O. Freaking. L.

Do any of you remember why Walton said there were empty seats in Pauley? Style. It's LA, the entertainment capital of the world, and the Bruins are boring and slow (which was exactly Howland's style until this year and even then). More than anything, they've just been a bad team that's painful to watch. So what makes more sense, that or TV? I think you'll agree that Gottlieb is the clueless one.

And really, why should we listen to that blowhard? This is a guy who:

If you think that bit about holding a grudge is far-fetched, then see what Gottlieb had to say after Jim Boeheim, another coach who turned down the Orange County scrub, surpassed Bobby Knights win total (from SBN's Syracuse blog, Nunes Magician). That earned him this: 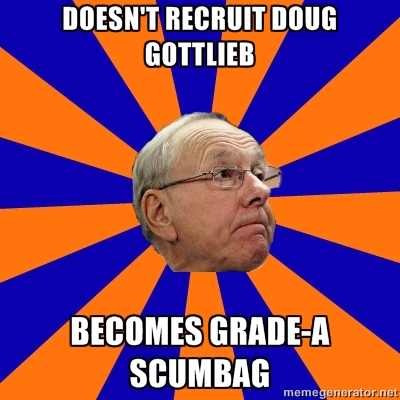 Henderson goes on to quote Howland again from the press conference in which he downplays Walton's comments as influenced by his "point of reference", which were the Wooden years, etc.

You've got to remember, his point of reference is 60-0 his first two years. So anything less than what he experienced is for him very difficult to accept.

No Ben, what's difficult to accept is one championship in 37 years, one tournament win in the last three years on the sole appearance in that span, players leaving the program, articles embarrassing the program and local recruiting in shambles. Don't make light of your shortcomings by mentioning previous success as a pretext for supposedly high expectations.

The truth is Howland has failed by reasonable standards for an elite program.

The other truth is that Doug Gottlieb is a moron. 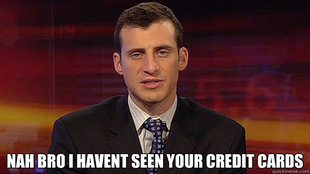