A quick look at the teams and matchups for the 2013 Pac-12 Tournament.

March is upon us! The regular season is [mercifully] over and it is time for the excitement of [useless] conference tournaments, with the real madness of the NCAA tournament lurking. With the games set to start on Wednesday we take a look at the bracket set for the 2013 Pac-12 Tournament and do a quick preview of each team and matchup as of today. As you know the top 4 seeds get a bye in the first round, and UCLA has the top seed after winning the conference title in the regular season. Given that the tournament will be held at the MGM Grand in Las Vegas, I will also add each team's odds of winning the championship (as provided by Top Bet), but that should in no way be considered endorsement or an encouragement of gambling.

Here is the bracket: 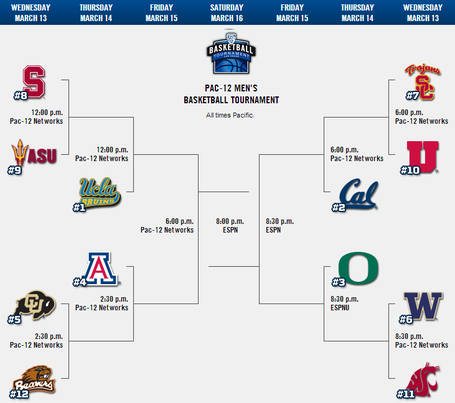 What more can be said about this team? In a turbulent season, for a mediocre conference, the Bruins came out ahead thanks to others' failures at inopportune times. Yes, there is a lot of talent on the team but there are also some glaring weaknesses, namely rebounding, defense and lack of depth. UCLA has had streaks of a nice fluid, fast-paced offense with great shooting, and other streaks of being badly outrebounded while shooting poorly...sometimes all within the same game. The team that won the conference also lost to the 7 seed, 9 seed and 11 seed during the season. They are fully capable of winning 3 games in a row, as predicted by the oddsmakers, but could also flame out spectacularly in their first game. UCLA plays the winner of the Stanford/ASU game on Thursday at 12pm, having beaten each team at least once (while losing badly to ASU once).

After going 7-9 in the meat of their schedule, the Bears got some players back from injury and finished the season 7-1, with wins over Arizona, Oregon and UCLA. However their last game may have set a terrible tone for their postseason. In a loss to Stanford, Cal looked undisciplined and had a big brawl. It's hard to tell if that will affect them but they are only given the 4th best odds at winning. They will play the winner of Utah/Southern Cal, against whom they are a combined 4-0.

For a while, Oregon looked like the best team in the Pac-12. They certainly looked better than UCLA after their coach Dana Altman punked Ben Howland in the second half of the game in OPUG with some great adjustments. Unfortunately, ex-UCLA commit Dominic Artis, who was playing really well for the Ducks, got injured and Oregon's season went sour even after his return. The Ducks haven't been the same ever since, finishing the season 5-6, including two losses in their last road trip where one win would have given them a share of the regular season title, and two wins the title outright. They await the winner of the UW/WSU game, against whom they are a combined 4-0.

The Pac-12 darling of the media and the referees' favorite had a great recruiting class, but that is somewhat mitigated by having Sean Miller as their coach. It certainly wasn't a bad season for Arizona, though they should easily have two more losses. The only "bad" loss on their record is against Southern Cal, but that came on a winless road trip. The Mildcats are given the second best odds of winning the championship, which is strange because they await the winner of the Colorado/Oregon State game. Assuming Colorado wins that game, it could spell trouble for Arizona. Even though they are 1-1 against the Buffs, the win was actually a loss as Colorado was robbed of a winning shot at the buzzer.

Last year's champion was mostly inconsistent in 2013, often beating the tougher of two opponents during the week but losing to the weaker one. But Tad Boyle has done a decent job with this program, earning a third straight 20-win season. It's unclear which Colorado team will show up, the one that lost to Utah and Oregon State, or the one that swept Oregon (and technically Arizona). They play Oregon State on Wednesday and have a chance to avenge their loss at home this past Saturday. That would earn them a matchup with Arizona whom I am sure they detest by now, so another run by the Buffs is not out of the question.

Lorenzo Romar's jungle ball crew had a decidedly mediocre year, never once beating a ranked team. They are also 0-fer against the top 4 seeds in the tournament. As always they may get up for one big game, but first they have to play Wazzu on Wednesday and that is no gimme for this squad. With the lack of attention to get his "thug" squad excited, this could be an early exit for Romar's Huskies. As much as I mock him, I'd like to remind everyone that he's 11-10 against Ben Howland...

For once, I envy the Trogans...but just a teeny tiny little bit. And the only reason is that they had the testicular fortitude to fire their coach Kevin O'Neill mid-season, after a win. His replacement Bob Cantu wasn't much of an upgrade though the Trogans did seem to play better when he took over, well enough to beat UCLA in OPUG. Another forgettable basketball season for Southern Cal, what else is new. After losing their last two games in the state of Washington, they take on a revived Utah team on Wednesday for a chance to play Cal.

After another mediocre season for the Cardinal, Johnny Dawkins will not remind anyone of Mike Montgomery. Stanford isn't particularly good at any aspect of the game, just middle of the road all around. They did however end their season on a good note by beating hated Cal and engaging in a nice scuffle. They play ASU in the first round, whom they previously beat at home on their only meeting, for a chance to play UCLA in the next round.

Herb Sendek likely saved his job after a bad 2011-2 season. But ASU certainly finished the season in a quite unconvincing manner, losing their last 4 games and 7 of the last 10. While they have one of the best players in the conference in Jahii Carson, they never quite got over the proverbial hump and peaked at the cusp of entering the top 25. Of course, they did manage to humiliate UCLA at home before their season trended downwards, so they are likely chomping at the bit to play the Bruins again if they can get past Stanford. I expect this game to be somewhat exciting (as exciting as games have gotten in this year's PAthetiC-12).

The Utes are still trying to recapture the achievements of the Majerus (RIP) years, but this season took them no closer. Utah was a bad team in all facets of the game, as reflected by the huge dropoff in their odds for winning the championship. Still, they closed the season well by beating the Oregon schools and are UCLA's favorite buddy right now. Howland may even name his first grandchild "Utah". They will play the Trogans in the first round in what should be a hard fought game.

The Cougars have Brock Motum, one of the conference's best players. They don't really have much else. But after losing 9 in a row, they beat UCLA and Southern Cal at home, despite having lost two of their starters to injury. Maybe something has clicked for Wazzu and the chemistry is suddenly effervescent. They will have extra motivation when they play rival Washington in the first round.

I think rather than betting on whether the Beavers can win the championship, there should be an over/under on how often a certain fact will come up during the broadcast. 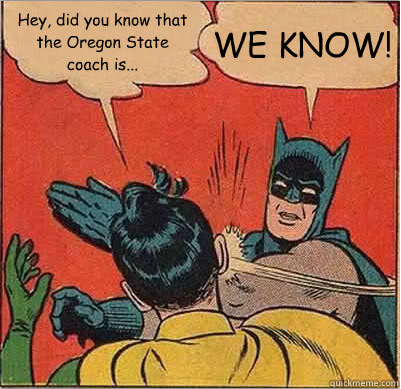 I think we'll be hearing that for, say, another 3-4 years? Distractions aside, Oregon State is still not good. They always seem to have one good player on their roster (Roberto Nelson), but are simply not in the same echelon as the top half of the conference. For a school that is seeing success in football and basketball, it is somewhat surprising that the basketball program can't take the next step, and it will be interesting to see what they do after this season. It would seem as though they have a tough matchup against Colorado in the first round, but they just beat the Buffs on Saturday, and previously only lost to them by 4.

That concludes your preview of the Pac-12 tournament. I would like to point something out though. If you notice, Stanford and ASU's odds of winning the championship are significantly higher than their seeding would indicate. But a closer look shows who their next opponent is, and if you are an oddsmaker, whoever plays the Bruins likely has a better chance of advancing, even if UCLA is the #1 seed. Granted this is just one oddsmaker, but intriguing nonetheless...