News and notes from our UCLA universe, and your game thread for today's non-UCLA tournament games.

You got a problem with that? Just think of it this way: if any of those first two parameters is zero, you can be infinitely productive! But if you have the bug, better stay sober...

After the first day of the NCAA tournament, a few things are clear to me. Firstly, Arizona is simply adored by the committee. They routinely get good seeding and placement, all from beating one or two good out of conference foes at the beginning of the season. Their conference record has often played second fiddle for the committee. Secondly, conference tournaments are terrible, a waste, and useless, except for smaller conferences. What did UCLA and Oregon gain? Nothing. UNLV and New Mexico were gassed and were missing more shots than a drunk Lindsay Lohan. Finally, the West bracket, where UCLA should have been, is in my opinion the easiest, while the South, where UCLA is, seems pretty tough. For now, Harvard is playing the role of Cinderella with Wichita State close behind especially if they keep playing as they have. As it is, the Pac-12 is undefeated and we'll see if UCLA and Colorado can keep it that way.

Here are some notes and news, followed by today's game schedule:

I didn't insert that link, it's in the article! Chianti Dan's fame knows no bounds! 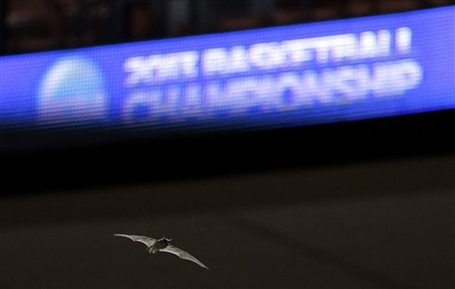 Meanwhile, the Bruins were practicing half court shots at practice...hopefully that's not what we'll need to beat the gophers.

Here is the game schedule for today:

This is your tournament thread for today. There will be a separate one for the UCLA game.