Some news and notes about our football team, to take you away from our basketball coaching search for a few moments.

Share All sharing options for: UCLA Football Bruin Bites - For Your Distracting Pleasure

Let's take a quick break from our own March Madness, which sadly has nothing to do with our team in the tournament and everything to do with the ongoing drama of UCLA Basketball. I still don't understand why some personalities feel the need to come on TV and proclaim that the UCLA job is not an elite one, without even being prompted. It reeks of an agenda.

All right, let's look instead at some news and notes around a program that instead has us excited and has engendered some positive anticipation. With spring camp set to start for UCLA Football, things are getting busy so here is a quick update. 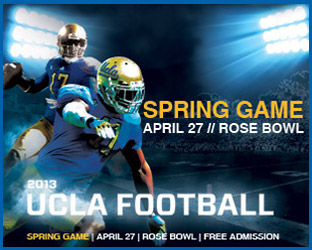 Nice to see graphics improving for football. Now about those sandwich boards...

The school is also petitioning to get him another year of eligibility, and if Malcolm indeed has that new dedication, he could be a huge asset next year.

That's it folks, hope I was able to distract you a bit from the hoops craziness.