Obviously, the truncated UCLA shoulder stripe has been a major concern for UCLA uniform enthusiasts, but it appears that Coach Jim Mora has heard the complaints from the various corners of the UCLA-iverse, and in a series of Twitter posts, has dropped some very encouraging clues that our uniform concerns are going to be addressed, and for once, finally fixed.

Rewind to 2010: Rick Neuheisel was our coach and Adidas rolled out the new TechFit uniforms for our Bruins, complete with the oft-lambasted truncated UCLA shoulder stripe. Suffice, to say, it did not go over very well, even to casual or neutral observers (such as Paul Lukas at UniWatch). Now, of course, Adidas has managed to put together some beautiful UCLA football uniforms since they purchased Reebok (our former supplier), including the recent "L.A. Nights" throwback uniform, the infamous "surrender whites", and the Gary Beban throw-back uniform: 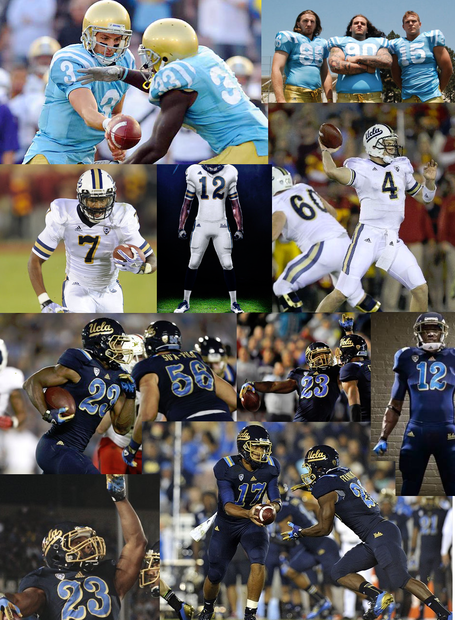 Now, of course, the biggest complaint has been the truncated shoulder stripe, which in its current form, is just wrong, especially since we're the school that invented the concept. Well, Coach Jim Mora has heard all of our complaining on Twitter and has sat down to explain to us what Adidas is saying and what is being done to fix it:

First, it's great that Coach Mora is addressing the issue head-on and not avoiding it by remaining silent, like his no-brain boss, Chianti Dan Guerrero. Remember, Chianti Dan saddled us with Adidas for the long-term by giving them a no-bid new contract, without ever seeing what Nike or Under Armour would do for UCLA (which is consistent with Chianti going out and pulling the trigger on Alford without doing his due diligence or waiting to see if Marshall, Pitino, or Donovan were really in play or not). But I digress, it's good that Coach Mora "gets it" so to speak. He had some follow up comments on the uniform as well:

More on the UCLA Stripe; it is part of the fabric of the jersey, not an insert, but it takes a 2nd layer to include it...con't

Not functional or comfortable to have 2nd layer under armpit.Adidas working on technology to include a rubberized paint that will...con't

allow us to extend UCLA Stripe.We all know how important it is to our fans and we promise to keep pushing.Adidas has been great. #50K

Second, everyone at BN agrees with Mora that on-field performance is the most important aspect to any athletic uniform. That's the key and if Coach Mora feels that the TechFit (which looks terrible on some of the big offensive linemen) makes us more competitive and gives us an advantage on the field, we're good with that, no qualms here.

Obviously, it's great news that Adidas is actively working on a way to extend the UCLA shoulder stripe to its proper length, as it should be: 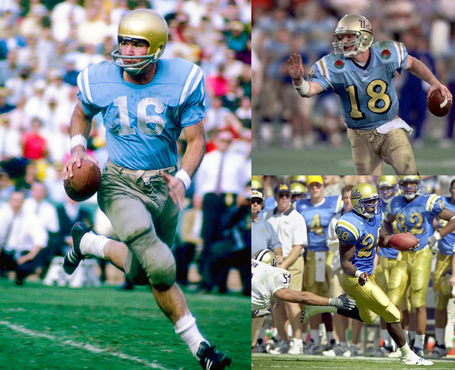 Now, those are proper UCLA shoulder stripes. From Mora, it sounds like UCLA's plan to extend the UCLA stripe isn't to actually change the construction of the uniform in any way, but to simply apply a rubberized paint to the exterior of the uniform that will artificially extend the stripe to the proper length. To me, that sounds like a cheap-way of solving the problem, but if they use the right materials, it might turn out okay. So for now, it's wait-and-see time.

The only qualm with Mora's explanation is the Adidas talking point that because of the uniform construction, it couldn't be done. First, there are NFL teams that have shoulder stripe uniforms, such as New England's throwback style red jersey: 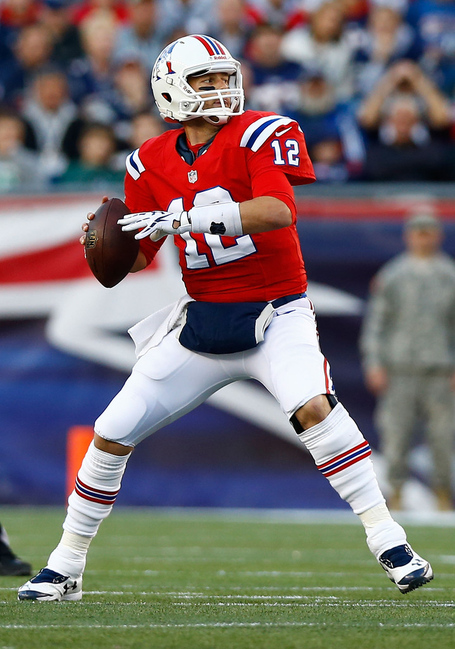 Notice the swoosh on the shoulder. It's a 2012 Nike NFL jersey. I would find it incredibly hard to believe that Nike and the NFL have guys playing in uniforms that are not technologically as good as UCLA's Adidas TechFit uniforms. It's the NFL and it's Nike. And it's not just the professionals who have Nike's newest uniforms with proper shoulder stripes: as we saw with Nike's Pro Combat uniform for LSU, it can be done with the newest football uniform technology. All-in-all, it strikes me that Adidas would prefer to use the current TechFit template without having to go back and re-work the construction to make it work. Again, I have no qualm with Mora explaining about how, with the current Adidas uniform, it could impair performance, but I think Adidas should be able to make a uniform that addresses the performance issue for Mora while allowing for a proper, fabric (not painted-on) UCLA shoulder stripe. Again, I can't imagine Tom Brady is wearing a sub-par uniform that doesn't allow him to perform at his best. Or for that matter, anyone at LSU, Ole Miss, or the other Nike college schools with shoulder stripe uniforms. So, Adidas, quit whining about not being able to do it with the current TechFit template. Get to work and do it properly: Nike figured it out, so can you.

In any event, let's turn back to some other interesting notes from Coach Mora, which bode well for the future of UCLA's football uniforms. Mora had sent out a picture of an all-white uniform set, combining the "surrender white" pants with the regular white away uniform and our traditional gold helmet. When another user asked about the white helmet, Mora had this to say:

@coach_tovar The white helmet is DEAD

So, now we know that we definitely won't be seeing the "surrender white" helmet again.

Another big issue that has come up is that our gold pants have not exactly been the right shade of gold, looking more like a muted tan than a gold. Ideally, they should match our helmets, as you can see in the image of DeShaun Foster above (and you can see how tan pants don't look quite right with Gary and Cade). Apparently, that problem has also been solved:

@bruinword Adidas has also come up with a solution to the pant issue, the UCLA Gold will be back!!

Very exciting: can't wait to see our Bruins wearing the proper shade of gold again. It even sounds like Coach Mora is getting the small details right (which, I have to say, is pretty freaking awesome): if you haven't noticed, UCLA's football helmets often have Riddell chin-straps, and the Riddell default wordmark is red (which you can see on Jet Ski here, here, and here). Obviously, we're not big fans of red in Westwood. Yeah, that's going to be taken care of too:

Boom. It's pretty awesome to have a detail-oriented coach who "gets it" when it comes to these small (but important) details. In fact, he strikes the perfect tone when he discusses whether UCLA will adopt the matte helmet look that has been the latest craze:

@megastarrr7 No plans for a Matte finish helmet, while we love to stay current we also value tradition, and UCLA has unparalleled tradition

True that, unparalleled tradition. Now, we just need to get our traditional shoulder stripes back and we're set. But the biggest (and most exciting for uniform geeks like me) news was the return of the UCLA Clarendon font for our uniform numbers:

@lamenamedave go with the Clarendon script for all unis! Distinctly UCLA. We are working on the Claredon script...Love it

@jyoungs4 I love the Clarendon, so distinctive to UCLA.The plan is to use it on both home and away jersey this year. #50K

Boom! This has been something that UCLA really needed to get back to, and hopefully, after rolling Clarendon numbers with home and away alternate uniforms this season, Adidas will transition away from block numbering and we'll have Clarendon for all of our uniforms, including regular home and away uniforms: 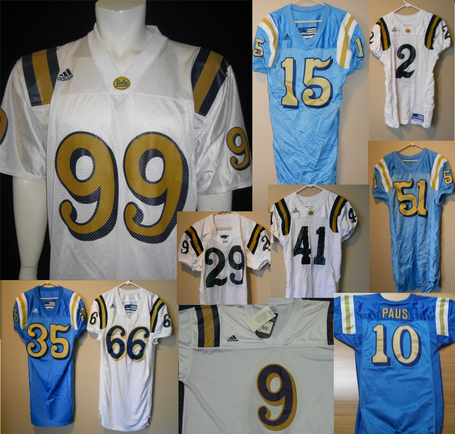 All-in-all, very exciting stuff from Coach Mora's Twitter account (and awesome that he engages with the fan base so directly), so we'll have to keep our eyes peeled to see what UCLA rolls out for uniforms this season. Hopefully, if Mora is right, Adidas is finally getting it together with our uniform (now, if we could do something about the terrible marketing for UCLA by both Adidas and Morgan Center).

Fire away with your thoughts on these uniform developments, opinions, and wish-list for our Bruins' gear this upcoming season in the open thread.