A Potentially Huge Reversal of Fortune for the UCLA Defensive Line

What was lost may now come back? UCLA could potentially add two huge players to its defensive line in 2013.

Share All sharing options for: A Potentially Huge Reversal of Fortune for the UCLA Defensive Line

UCLA football coaches and fans could be getting a huge boost in the near future.

If you recall, it was reported earlier that UCLA Defensive End Owamagbe Odighizuwa would be unable to play this season following his hip surgery. The news were a blow as Owa was slated for a rather big year after all the progress and potential that he showed. Let's face it, the dude should be a beast!

Well it turns out that Owa's injury was not as serious as previously thought and that he could be back for the 2013 season (also fanshotted by bruinfan94):

It was originally believed that the 6-foot-3, 270-pound Odighizuwa had a torn rotator cuff in his hip, but it now appears the hip was just "frayed," which means a recovery time of just two to three months.

That would be a big boost to solidify the defensive line that which, while it is deep, is not necessarily all that experienced. Owa would likely complete a trio of senior starters at that position.

But that is not all.

Everyone here should remember signing day, a day that has actually become fun for UCLA Football. Mora and company cleaned up on that day...but missed the cherry on top.

We were all on pins and needles awaiting word from Eddie Vanderdoes (no I'm not calling Eddie a cherry, it's a figure of speech okay?), who was picking between Notre Dame and UCLA. The stud recruit eventually went with Notre Dame...but the story doesn't end there.

Things didn't start out well when Notre Dame botched his announcement. But Vanderdoes is seemingly having other issues of a personal nature that are leading him to try and get out of his Letter of Intent.

Notre Dame must release him in order for him to get out of what is a binding contract, and hopefully they will not be petty about it unlike Mike Gundy, the Oklahoma State coach, though I could see them being pissed off if Eddie was looking to go to Southern Cal.

The presumption of course is that Vanderdoes would switch to UCLA to be close to his family, but nothing is said or done as of yet and hopefully Eddie will get what he needs for his own well-being. Even though the Irish just went to the championship game, I for one can't blame Eddie for having reservations about playing for this guy: 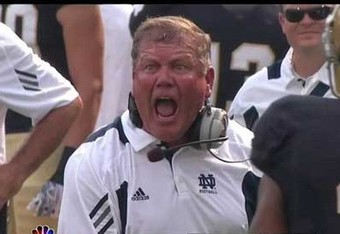 Anyway, if UCLA just might be lucky enough to get both of those guys for 2013. There is a chance that Vanderdoes would have to sit out for a year depending on how Notre Dame handles the release. Regardless, it would be a huge boost to both this upcoming season and the future if Eddie makes it to Westwood.