UCLA wants to be Linebacker U: Exhibit A - Kirby Lee-USA TODAY Sports

In response to Linebacker U-

This a brave and powerful statement by this linebacker corp. Although there have been great linebackers from UCLA, this is more about what they are trying to create today. A new tradition and reputation. This attitude is synonymous with the new culture of the entire team. To be great sometimes it doesn't hurt to be bold. I encourage the young men in the linebacker room to embrace their dreams and to vocalize them. Sometimes when a dream is heard, it becomes a powerful mission statement. One that will help you rise to greatness. Sometimes it's easier to stay quiet about your dreams because if you fail no else knows about your ambition. These young men don't want it easy. I love it.

So expectations are high now. Perfect. Anthony Barr has been rescued from the abyss of averageness. To become what he has become, he had to redefine himself and taking it a step further he vocalized it. Now he wants greatness for the rest of the group. Some call that arrogance. I call it leadership.

Ideally we are all motivated to be the best we can be in every moment of every day. However, there are days when you are outworking everyone around you and a crazy expectations help you run one more sprint. Spend one more hour in the film room.

In 10 years we will see how crazy this statement is. I have and will always stand behind my linebackers.

Besides being a great statement, why are we talking about a Facebook status?

There is no question there is a new attitude around U.C.L.A. football since Jim Mora and his staff came to Westwood. And though talk is cheap and the scoreboard is the ultimate report card, there is nothing wrong with setting high expectations and making it a goal to achieve them.

With this in mind, UCLA Football recently tweeted the hashtag #linebackeru with the following picture: 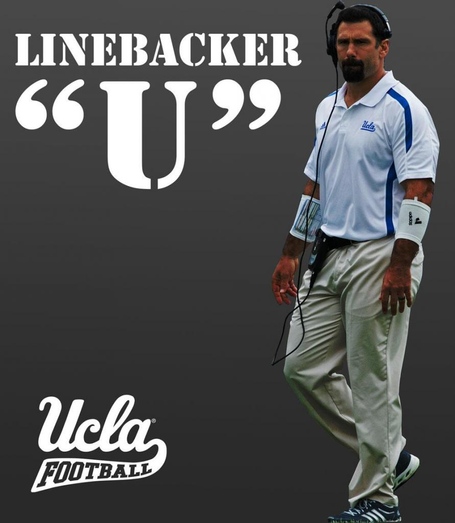 For the alphabetically challenged, the "U" there is for Coach Ulbrich. Ulbrich (see there everyone, his name starts with a "U") knows a little something about the LB position. He played it for 10 years in the NFL.

He seems to know a bit about coaching the position, too. Since his arrival in Westwood a year ago as part of Coach Mora's new staff, Ulbrich has helped transform the Bruins linebacker corp into arguably the top unit in the Pac-12 this season, and has overseen the conversion of a nearly forgotten running back into a preseason All-American OLB and potential Heisman candidate this year. Ulbrich also helped land some incredibly talented recruits who look poised to improve the unit even further.

The walking PR machine that is Offensive Line Coach Adrian Klemm has been using the hashtag #OLineU to hype up his big time recruits and the O Line's improvement from a formerly woeful unit into a line that is strong and getting stronger. The linebacking corps looks to be in even better shape, so the Bruins are understandably proud of both their progress and their ceiling, and they are talking it up, too. UCLA: #linebackeru

Apparently, this really upset some people.

While the usually reliable Dr Saturday at Yahoo! was simply confused, the folks over at Black Shoes Diaries, the excellent SBNation site of Penn State, were most put out. As the original and rightful owners of the term Linebacker U, they don't appear to be open to sharing the name, never mind that the University of Miami has been carrying the title themselves for several years.

Meh, whatever. The petulant and defensive comments by the PSU faithful in their thread show they are either missing the point or just myopic. No one here or anywhere is disputing that their school has an incredible tradition of linebackers, and while the Bruins have had plenty of great linebackers through the years, U.C.L.A. has a long way to go to begin to include itself with the likes of Penn State or Miami. But if Coach Ulbrich wants to adopt the term to tell everyone, particularly his own players, where he expects this program to be from this point on, I'm all for it. And personally, if I'm Penn State, I don't start making a fuss about intangible things like reputations right now. Focusing on the future should be the right move for them, too.

And for the Bruins, that future begins with prominent names like Anthony Barr, Eric Kendricks, and Jordan Zumwalt, and hopefully will grow to include Aramide Olaniyan and Kenny Orjioke and Aaron Porter and Stan McKay and Myles Jack and Isaac Savaiinea and Deon Hollins Jr and any of several others. The games in the fall will tell the story, but in between seasons, motivation and determination is all you got. And Ulbrich has it right.

U.C.L.A.: Linebacker U. As Ulbrich wrote, "Some call that arrogance. I call that leadership". And we have been needing plenty of that in Westwood for a long time. Until last season, the recent decade at U.C.L.A. has understandably earned little respect in the college football world. Ulbrich is the latest on the coaching staff to lead the team in a new and lofty direction.

I like the direction. I like the sentiment. One extra sprint, one extra rep, and some extra film. Let's go do it.