A look at the Bruins Nation predictions for the 2013 Pac-12 football season.

Share All sharing options for: Our Humble 2013 Pac-12 Football Predictions

Mid-July. Three weeks from camp, six weeks from the start of the season. College football fans have the shakes right now, grasping for any bit of info, watching 60 minute game repeats on TV, warming up for another season that starts full of hope. And it's almost a little strange for UCLA fans...the feeling of impending doom seems to have waned, replaced by uncertainty if not optimism. Sadly, that is in fact an improvement from the last decade or so. Some just don't want us to lay any more eggs, others are positively giddy about getting to the Rose Bowl game. In any case, we'd like to share with you our humble Pac-12 predictions for the 2013 football season. This is really just for fun and out of curiosity. Before any of our conference opponents get in an uproar, just know that we cannot possibly know everything about every team. But we think we know what is going on generally in the conference to make some educated guesses. We did reasonably well last year (and luckily I got my wish about a certain Trogan), which was a bit tough given that there were 4 new coaches in the conference. Things aren't much easier this season.

This year, the consensus seems to be once again that the two elite teams in the conference are in the North, with Stanford and Oregon battling it out to get to the championship game. Will Stanford have an edge from playing at home? It remains to be seen. For some reason, some still think U$C will have a strong team. They certainly don't lack for top recruits, and have the best coach in the conference who should get a lifetime contract (don't believe this guy or this guy). Yet a lot of outlets (see here and here) are picking our Bruins as the team to beat in the South, with ASU close behind. So what's in stock this year?

Secondly, we are not going to provide the specific W-L results on all the games, but you can get at least an idea of my thought process for UCLA in this post. It would be a bit much to provide all the results anyway.

Thirdly, 12 of us frontpagers participated in this little poll, and the results are based on average win-loss record. Not a huge sample size, but there is no time to get everyone's opinion in the community, valuable though it may be. 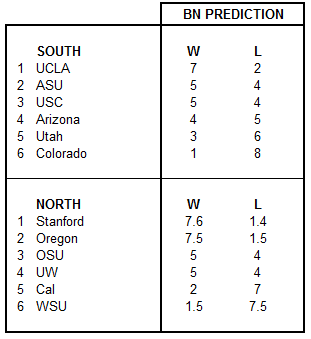 - UCLA is picked to win the division comfortably. You would also be happy to know that every single one of us picked UCLA to beat Southern Cal. We were split last year so hopefully we are not getting overconfident. But really.

- Also, every single one of us has UCLA winning the division with a minimum of 7 wins and a max of 8 wins. Our predictions are now matching our expectations, which hasn't happened in a while.

- Oregon has the smallest of edges over Stanford to win the conference. Their game will likely determine the division champ, but it will be interesting to see how UCLA plays in that equation given that they play both of them in their respective home stadium.

- There is once again a drop off after Oregon.

In short, we are predicting a repeat of the 2011 Pac-12 Championship, hopefully with a much better result.