Well, it's about time.

After talking over and over about feasibility studies (barf) and other bureaucratic nonsense, the Morgan Center has finally taken a step towards Achievement rather than just Activity.  Our beloved Athletic Director and Coach Mora just announced plans for a comprehensive football facility:

Of course, this is a tiny first step but at least having a big announcement like this will make Guerrero and his minions accountable, because much is left to be done:

A feasibility study analyzed the site conditions, and the university has elected to move the project forward with a request for proposal to select an architect. The selected firm will work directly with Guerrero, Mora, the Department of Intercollegiate Athletics and the university to develop the size, layout and renderings of the proposed facility.

I have a feeling (or perhaps a hope) that Coach Mora will have a much more influential role in this than our athletic director.

It looks like the facility will be built on the west side of Spaulding Field. 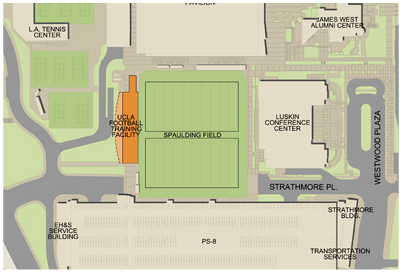 Funny that they forgot to include the real name of the newly planned hotel, aka The Bilkmore...

This will also have some positive repercussions on the Acosta center which the football team currently uses, and you can read more about it here.

As for funding, the project is estimated to cost roughly $50 million, which they plan to raise from private funds, and construction will start as fundraising milestones are reached.  Personally, I think the timing is great as there is a lot of optimism about our program.  If they had been half this smart about the Pauley renovation, it would not have been such a mess.

There are a few more details about the plans, and an opportunity to donate to the effort on the main site.

We have spoken ad nauseum about the need for UCLA to catch up to the rest of the conference, and this is not just a good first step but a crucial one if our program wanted to remain in the conference "arms race".  As with all such plans, execution is key.  But I wouldn' t be surprised if they reach their fundraising goal rather quickly.

And wouldn't it be a nice touch to have some sort of tribute to Nick Pasquale in the new center.

We will keep a close eye on how this develops.  But for now...GO BRUINS!