November is here, and hopefully that means U.C.L.A.’s perennial October Slump is over. Translation: time for us to win out the season. Another busy week, another hurried write-up…

…so let’s jump right in and see how Brian Fremeau’s Efficiency Index sees U.C.L.A. and its upcoming match against Washington. The FEI is an advanced statistical measure that uses "each of the nearly 20,000 possessions" to track a team’s drive efficiency. Basically, the FEI looks at how successful a team is at maximizing its scoring opportunities while limiting its opponents’ scoring opportunities. We’ll also take a peek at Bill Connelly’s S&P+, a play-by-play advanced statistical measure that looks at a team’s success rate and explosiveness per play.

Both the FEI and S&P+ are opponent-adjusted and exclude garbage time. The F/+ combines the FEI and the S&P+ and serves as the "official" college football ranking for Football Outsiders. All "per game" information is pulled from cfbstats.com. 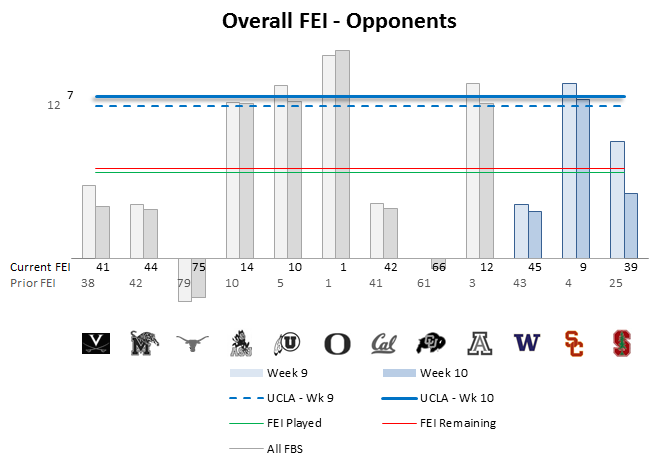 U.C.L.A. climbs from overall #12 to #7 after a convincing (and surprising to me, at least) win over Arizona. Washington, for its win against Colorado, dropped from #43 to #45. The Dawgs are hopefully nothing more than a speed bump before U.C.L.A. heads into back-to-back home games against a good Southern Cal team and an increasingly pedestrian-looking Stanford.

Regarding U.C.L.A.'s inconsistent performance, Bill Connelly had a humorous take in his Study Hall: UCLA 17, Arizona 7 wrap up, one which I think fans here generally agree with:

I am completely and totally done trying to figure you out, UCLA. I'm just done. The numbers are starting to like you quite a bit (16th in F/+, ahead of Arizona State, Notre Dame, Louisville, etc.), and that's great. I don't rank you at all. There are 127 FBS teams, and there's UCLA floating around, playing like a completely different team every week! Good defense, bad offense! Great offense, bad defense! Okay offense, incredible defense! Destroy Arizona State, lose to Utah at home, try to lose to California, try to lose to Colorado, completely shut down Arizona. 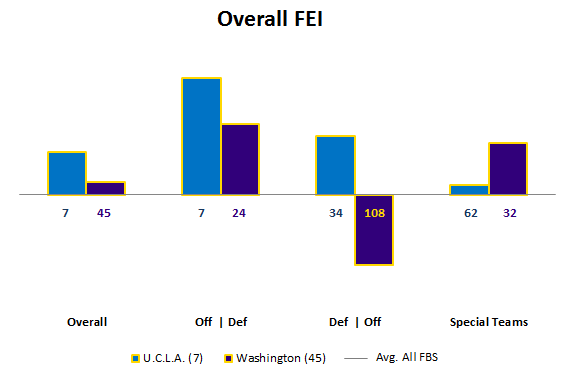 At an overall #45, Washington is ranked just below Cal in the FEI. Where Cal’s strength was built on their offense, Washington’s is built on its defense. While the Huskies are definitely beatable, their defense has been improving and could easily test our sporadic offense.

As mentioned in the quote above, U.C.L.A. is ranked outside the Top 25 in the S&P+, but ranked respectably using the other measures below. 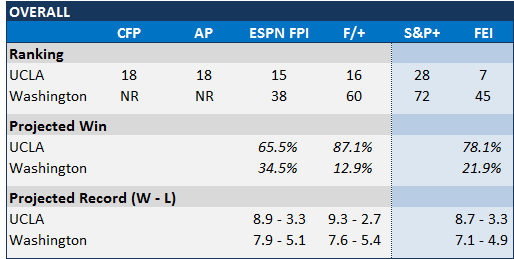 Now let’s take a closer look at the components that make up the FEI efficiency ratings. These measurements consider what our offense has accomplished and what our defense has allowed our opponent to accomplish in terms of: 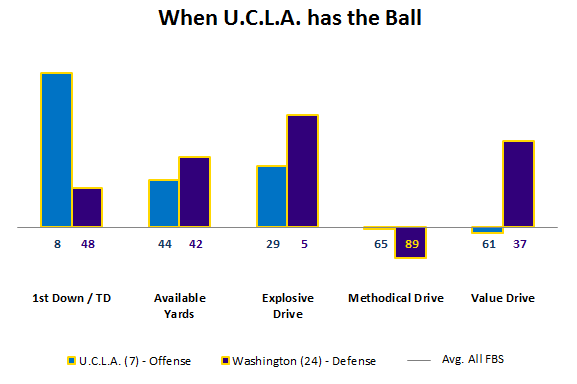 Outside of Utah (#2), this will be the toughest defense the Bruins have faced. For reference, Washington (#24) is ranked a few spots above Arizona (#31).

The Dawgs’ defend against the run much better than in the air, but despite Shaq Thompson likely sitting on offense, the Huskies still have Danny Shelton and Hau'oli Kikaha who can provide immense pressure on Hundley and our backfield. Washington D is ranked nationally at #2 in sacks per game, and is extremely strong defending against Explosive Drives, so hopefully we can get a lot of quick releases to the outside and build some Methodical Drives, which is an obvious chink in Washington’s defensive armor.

So… Washington is good getting sacks, and U.C.L.A. is terrible against stopping them. Got it. Hundley will be pressured, but if he can perform out of the pocket he should be able to do damage with his legs or against a weak secondary that will be starting three true freshmen.

At #7, U.C.L.A.’s offense is still ranked extremely high. Below is a graph of our week-to-week Game Factors, one of the underlying components in the FEI.

Last week’s offensive showing against Arizona is ranked at #215 out of the 988 FBS games played this season. 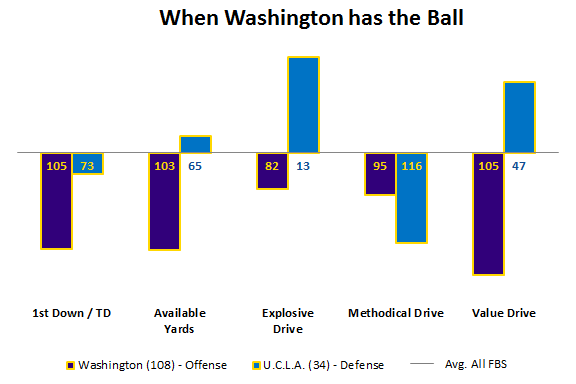 Not much to say here – Washington’s offense is dismal in every respect. If the Bruin defense is going to take its foot off the pedal, this is the game to do it. Not saying that we can look past this team and expect to win, but the D doesn’t need a repeat of last week’s stellar performance for the Bruins to walk away with a win.

The Bruins are still terrible at stopping Methodical Drives, which could be an issue this game. If Shaq Thompson has even a fraction of the production he had running the ball against the Buffs, the defense will have to key in and it will likely give Cyler Miles (QB) the opening for some short and even intermediate throws.

Looking below, the FEI loved last week’s defensive showing against Arizona, giving us our highest defensive rank this season and scoring it #44 out of the 988 FBS games played this season.

If you took the time to read last week’s preview against Arizona and are wondering why our defense suddenly looks so much better, it’s because I accidentally inverted last week’s line. I’ll go ahead and give myself a face palm for that one… 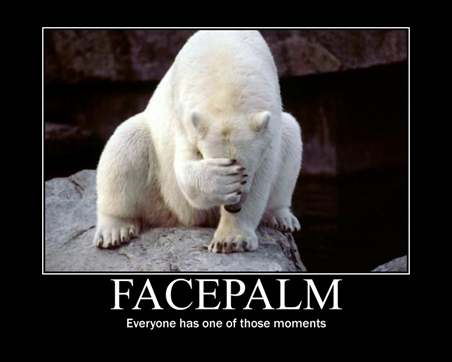 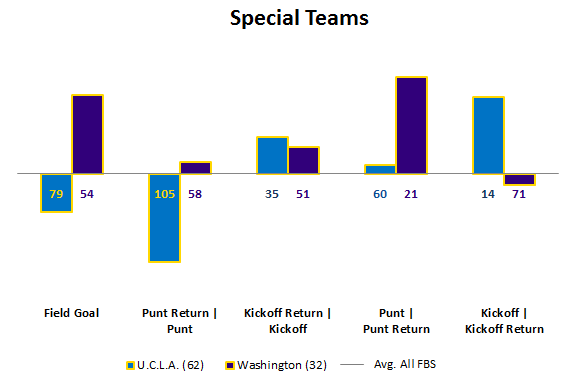 Dayum, at an overall #32 Washington puts our Special Teams to shame. Washington’s high punt return ranking is due in small part to their recent return for a touchdown against Colorado (their first such return since 2003!), but also due 12.4 yards per return (#23) and forcing opponents to 2.6 punts per game, good enough for #16.

The public thinks we will win this game. I will not be surprised either way. If we shoot ourselves in the foot with turnovers or an excessive amount of penalties, a loss is assured.

But with three more wins and a (small) upset by the ‘Cats over the Sun Devils, we may just get to leave the Pac-12 logo in the graph below as we’d be headed back to the Pac-12 Championship game. 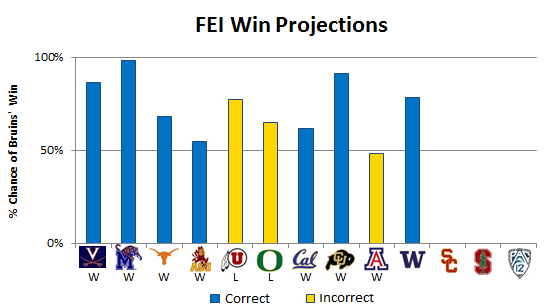