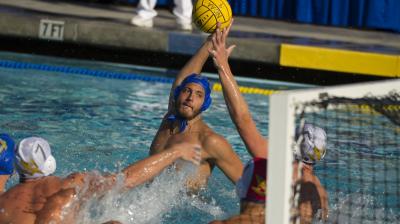 Official Preview: None (Thanks Dan!)

In my opinion, the Trojans are a tad lucky to be in the tournament this season. After finishing third in the conference and fourth in the MPSF tournament, the Trojans had to depend on the generosity of the selection committee. I don't know if the committee factored in reputation rather than relying strictly on results, but to the extent that the Trojans were better qualified than Long Beach State for a play-in game, it must have been by the slimmest of margins.

As a result of the selection committee's seeding, USC (the third seed) had the benefit of a warm-up play-in game against Whittier before facing second seed Stanford. The Trojans beat Whittier 19-4, and then, in a tightly contested semifinal, USC edged Stanford 12-11 on a sudden-death goal in the third overtime period.

The Bruins Dominate the Tritons

As the top-seed in the tournament, the Bruins were slotted straight into the first semifinal. Their opponent was UC San Diego, the fourth seed, coming off a 12-7 play-in game win over Brown. The Bruins started slowly but held a 2-1 lead at the end of the first period thanks to goals by Paul Reynolds and Cristiano Mirarchi. The UCLA offense kicked into top gear in the second period. Goals by Anthony Daboub, Mirarchi, Chancellor Ramirez, and Gordon Marshall, plus a brace by Ryder Roberts extended the Bruins lead to 8-3 at halftime. The Bruins continued to pull away in the third; goals by Marshall, Mirarchi, Matt Farmer, and Daniel Lenhart gave UCLA an eight goal cushion at 12-4 heading into the fourth period. The Bruins added three more in the final frame courtesy of Lenhart, Reynolds, and Jack Fellner to wrap up the 15-6 win. For those who missed the UCLA-UCSD match, here are a couple of highlights from UCLA's semifinal win (plus highlights from the other semifinal),

In case anyone wants to view a full replay of the Bruins victory, it's here:

Cristiano Mirarchi led all scorers with a hat track, and Lenhart, Marshall, Reynolds and Roberts each had a brace. Garrett Danner registered 13 saves.

The Bruins and Trojans have already faced off four times this season. UCLA won the first encounter 9-7 in the semifinals of the Kap7 NorCal Classic. Southern Cal bounced back to defeat the Bruins 10-6 in the semifinals of the SoCal Tournament. UCLA traveled across town for the MPSF regular season matchup with USC and returned to Westwood with a 10-8 victory. Most recently, the Bruins crushed the Trojans 10-5 in the third place game of the MPSF Tournament. That makes UCLA 3-1 against USC this year, and 2-0 at neutral sites.

Southern Cal's offense is led by senior All-American Kostas Genidounias. After totaling 80 goals in 2013, Genidounias added another 80 this year. Redshirt senior Rex Butler, now 23 years old, is second on the team with 47 goals. Four freshmen--Matteo Morelli, Grant Stein, James Walters, and Lachlan Edwards--have contributed 39, 33, 33, and 31 goals respectively. Senior Marc Vonderweidt is the only other Trojan with over 30 goals (31).

The Trojan's first choice goalkeeper is 6'9" freshman Baron McQuin. McQuin averages 11 saves per game and has allowed an average of 6.86 goals per game.

Although the Bruins looked a little off the pace in the opening minutes of their semifinal yesterday, they were impressive for the remainder of the game. One consequence of UCLA's comfortable victory in the opening semifinal and Southern Cal's hard-fought, three overtime win in the late semifinal is that the Bruins should be fresher for today's final. However, as both reigning national champion and underdog, the Trojans may have a psychological advantage.

It's been ten years since our men's water polo team last won a national championship. That's too long considering our status as an elite water polo program and our proud history of winning national titles in water polo. This is our year. We have an outstanding team and we've had the pleasure of beating USC three times already this year. Let's make it four today. Let's claim #112 today.