UCLA's Neuheisel looks sharp in Spring practice, but will penalties continue to be problematic?

Saturday was definitely a full contact day with lots of contact drills being featured. One of the first contact drills were Oklahomas. While there only seemed to be a few (maybe 5) of these, these really fired up the team as seen in the exuberance after each one. 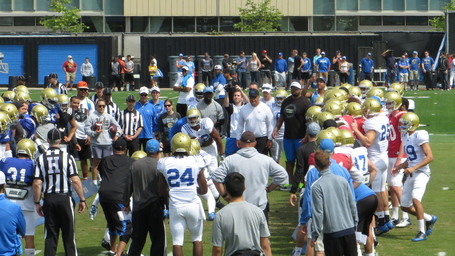 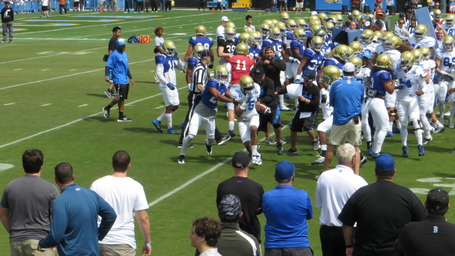 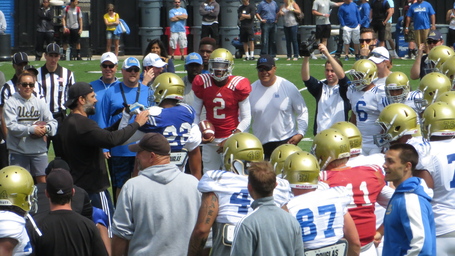 As Patroclus mentioned, one of the more interesting things to watch this Spring has been the competition between Jerry Neuheisel and Asiantii Woulard. Yesterday, Jerry seemed to be playing at a higher level as he should be due to the fact that Asiantii is a freshman.

The good news is that Jerry looked like he has a very good grasp of the offense. In fact, he looked ready to step in if something were to happen to Brett Hundley. During the full scrimmage, he drove the team down the field and finished the drive in true Hundley-esque fashion by running the ball into end zone himself.

After that drive, it was nice to see Jerry go up to his offensive linemen and give each one of them props for their help in getting the team into the end zone. 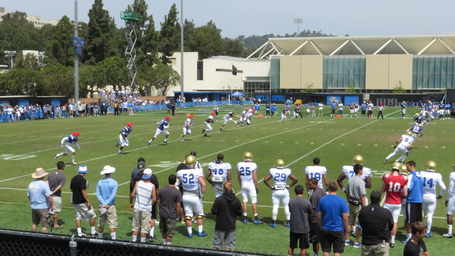 It wasn't all roses for the offense, though, yesterday as the defense had their moments too. They really seemed to have their fair share of plays where they were stopping the run for little or no gain.

Meanwhile. another thing that stuck out was the fact that the officiating crew that was present seemed to be throwing an awful lot of flags and almost every one of them was against the offense. They seemed to be almost exclusively of the illegal motion and false start varieties.

While we should hope that this is because it's Spring and players may be a little rusty, we need to hope that this doesn't continue into Fall practice and the season itself.