As practice started, the running backs were performing drills on the north half of Spaulding near the end zone closest to the fan bleachers. In addition to using trash-can type dummies to simulate linemen, Coaches Polamalu & Foster had them running under a bar designed to keep them running lower to the ground. On the whole they also seemed to be working hard. Whether it was hitting their holes or running out a play, they were getting the job done with a minimum of mistakes. 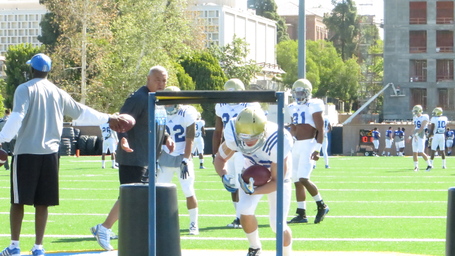 To me, the one guy who seemed to stand out was Craig Lee.

The guy is just plain fast.

While he may be a little on the small side to become a bruising running back, his quickness cannot be understated. If you're a defender and you blink, he is probably past you.

I got the distinct sense that by Fall Camp he could be pushing other guys for playing time. 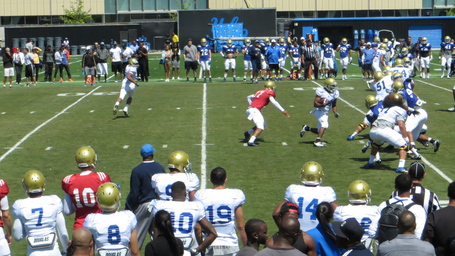 After watching Coach Polamalu today, I felt like the RB corps is going to be ready to take pressure off Brett Hundley when the season comes along.

Speaking of Brett Hundley, the initial reports about how Brett Hundley has really grabbed an understanding of the offense seem to be true. During passing drills, Hundley could be seen making his progressions from one receiver to the next if the previous guy was covered. There was one play in particular where Hundley ended up dumping a safety valve pass to a back because his first two guys were well-covered.

Hundley wasn't the only quarterback playing well today. In general, they all looked sharp. Passes were crisp and reaching their targets most of the time, even if Ishmael Adams literally ripped one ball out of a receiver's hands for a pick. 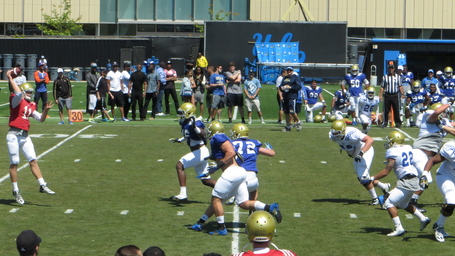 Practice today wasn't all roses though. Scott Quessenberry appeared to skirmish with some of the defensive guys a bit to the point where we started to wonder if the defense might have been targeting him on purpose. Thankfully, it didn't look like Quessenberry got thrown out of practice. So, the skirmishing wasn't too bad.

The worst part of today's practice occurred when OL Ben Wysocki went down. It wasn't clear as to how he got hurt or what he hurt, but they did bring out a golf cart to carry him off the field so his injury was serious enough to require that. Best Wishes to Ben for a quick recovery!

Two notable people were present this morning. The first was former Saints and Colts coach (and dad to our head coach) Jim E. Mora. While he was close enough as I walked in, I resisted the urge to ask him what his thoughts are on our team making the first CFB Playoff. 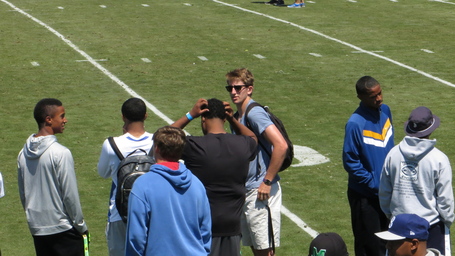 The second notable attendee was our QB of the Future Josh Rosen. From the point that we spotted him, he was standing in a group of 5 or 6 recruits. I couldn't tell you who else he was with but perhaps someone can identify some of them from the photo I took. After practice ended Coach Mora came and visited with the group before heading to his post-practice presser.

Overall, I'd call it a very good day at Spaulding.