A look at the Bruins Nation predictions for the 2014 Pac-12 football season.

Share All sharing options for: Our Humble 2014 Pac-12 Football Predictions

Well hello there brothers and sisters.  Yes, it's been a while since I have posted anything on BN, but as you have noticed we brought in some 5-star recruits who have become starters very quickly and are just crushing it with their coverage.

With camp almost over, we have a pretty good idea of where this team stands.  And it's almost a little strange for UCLA fans...there has not been this much hype around the program since 1998.  Even in 2001, when the team started out red hot before losing DeShaun Foster and just giving up the rest of the season, there was little to no preseason hype on UCLA (coming in at #17). After 13-9 in 2006, UCLA came in at #13 in the preseason, only to get Dorrelled.  So while this is not new territory for UCLA, it is like a visit from an old friend but you sense that something may have changed.  There are still questions about this team, it would be dishonest to say that we look elite at every position.  But so far, Coach Mora's teams have improved every year for the most part, and the hype has followed accordingly.  The expectations on this year's team are pretty consistent in the college football world, from fans and alums to "experts".  All that remains is to see whether Coach Mora's results are more like Pete Carroll's or Jeff Tedford's.  We already know where he stands on the character front.

In any case, we'd like to share with you our humble Pac-12 predictions for the 2014 football season. This is really just for fun and out of curiosity. Before any of our conference opponents get in an uproar, just know that we cannot possibly know everything about every team. But we think we know what is going on generally in the conference to make some educated guesses. We did reasonably well last year but missed out on the championship game because of one single decision. And while the schedule seems more favorable this year, nearly every team we play will have likely have improved from last year, to the point where even ESPN thinks UCLA has the toughest schedule in the country.  The question is, will UCLA have improved more?

This year, the gap between Oregon and Stanford in the North has grown.  With the addition of Petersen at Washington, it now seems more like a battle for second.  For some reason, some still think Southern Cal will have a strong team. They certainly don't lack for top recruits, and just made another head coaching change while staying with the Trogan family.  But the consensus is that the Bruins are the team to beat in the South, with ASU and Southern Cal close behind. So what's in stock this year?

Secondly, we are not going to provide the specific W-L results on all the games, but you can get at least an idea of my thought process for UCLA in this post. It would be a bit much to provide all the results anyway.

Thirdly, 9 of us frontpagers participated in this little poll, and the results are based on average win-loss record. Not a huge sample size, but there is no time to get everyone's opinion in the community, valuable though it may be. 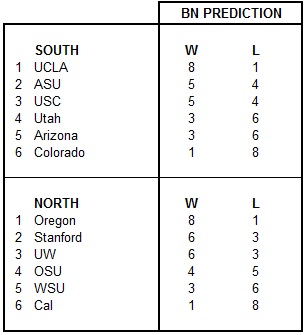 - UCLA is picked to win the division comfortably. You would also be happy to know that every single one of us picked UCLA to beat Southern Cal. Playing at home, I don't think that's being overconfident.

- Also, every single one of us has UCLA winning the division with a minimum of 8 wins and nearly half had us going undefeated in the conference.  Our predictions are now matching our expectations, which hopefully is becoming a good trend as we keep our expectations high as they should be.

- Oregon seems to have distanced itself over Stanford to win the conference. Given the attrition at Stanford and the game being played in Autzen, this seems sensible.  But we have underestimated Stanford before.

- Washington is inching its way up due to their new coach.  That should have Dawg fans happy, because in reality they have lost a NFL running back and a 4-year starter at QB, as well as a great tight end.  I guess that's the coaching effect, but we'll see if Petersen breaks the mold of previous Boise State head coaches.

In short, we are predicting a date with the Ducks at Levi's Stadium.  It's a game UCLA must win if they want to make the next big jump.