UCLA has their best day of practice yet. Coach Mora focuses on the defensive pass rush. #Hundley4Heisman sits down with Kirk Herbstreit.

So, let's recap Day 4 in San Bernardino. My favorite way to do that is to hear what Coach Mora has to say.


Mora started the presser off by saying:

As it should be, of our four practices, that was the best one. We got a lot of work done. I told them we finally have gotten to a point where we can practice fast, we practice hard and guys are staying on their feet. When you stay on your feet, you avoid injuries for the most part. That's a real positive. It shows our level of athleticism has improved up along the front and it shows our level of maturity has improved since we understand what we need to get done. I was impressed with the way they worked today and we have to keep pushing every day and they're pretty darn committed to that.

That's a pretty strong statement about yesterday's practice and it pretty much says all that we need to hear, but, of course, Coach Mora went into detail about some other topics.

He was asked about Kenny Clark's progression on the Defensive Line. Mora said:

Often, he's overlooked because he's a nose tackle. He doesn't necessarily make a lot of tackles. But he has a real impact on our defense.

[Eddie Vanderdoes] showed up again today. When you get Kenny in there, and Eddie and Owa and Ellis, you have some good looking guys who can do some things....You don't replace Cassius and AB and Keenan Graham. Those guys did a lot of good things. The guy who has shown up through four practices to me was Aaron Wallace. When you go through the things he did in the spring and something you love is snatched away, you appreciate it more.

On the injury front, Mora said that Jordon James' hamstring was "was a little sore but he did all the individual. I'm not sure, I didn't ever get a report that he was hurt." We'll have to see if this ends up being a bigger setback than expected for James.

He closed the press conference talking about a guy that is on my list of players to watch based on my observations from Spring Practice -- Craig Lee. Mora said:

He needs to learn how to put his foot in the ground and go downhill. I've seen tremendous improvement in Craig. I saw it in the fall to the spring and the spring to now. His blocking is getting better, he's catching the ball a little better. The big thing with Craig, if he can get to open space, he's going to be hard to catch....Craig still doesn't know where the hole is going to be.

It has been mentioned how our QBs have switched from red jerseys to yellow ones. The different color jerseys are used to differentiate the quarterbacks from other players to help them avoid contact. Bruin Report Online posted a picture of the new yellow jerseys. 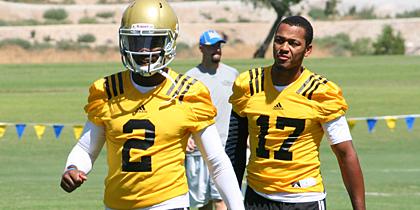 Definitely a much needed improvement!

To wrap things up, we're going to share one more video which, while not related to yesterday's practice, is definitely UCLA-related. Kirk Herbstreit recently sat down to talk with Brett Hundley. Here's what they had to say: