If we were to count the people who know more about opera than I do, we would put brother Fox at the top of the list. On the second tier would be practically everyone else on the planet. At the bottom, on the same level as my knowledge of sixteenth-century Middle Eastern poetry, would be me.

Nevertheless, having heard some amazing à-la-carte performances by opera stars over the years, I am in full appreciation of their talents. In particular, a great tenor can leave me in awed rapture. So, ignorance aside, I am going to proceed as though I know about that of which I speak.

It isn't often that an extraordinary trio of world-class tenors live and sing in the same era. It is rarer, still, when these tenors perform together as one, as the The Three Tenors (Italian singer Luciano Pavarotti and the Spanish singers Plácido Domingo and "the other guy," José Carreras) have done on occasion since 1990.

Having these three remarkable singers perform at the same time is, I imagine, the operatic equivalent of powering your family sedan with three turbo-charged engines. Three-Tenor audiences must be positively enthralled, basking in glorious, soul-piercing excess at its finest.

Needless to say, this alignment of "stars" doesn't happen very often. Like first-hand viewers of full solar eclipses and other rare astronomical phenomena, we feel privileged to be alive and on hand when it happens.

Well, as it turns out, a similar, but unique, confluence of three particular forces is also occurring at UCLA as we speak. In contrast to The Three Tenors, however, the music produced by UCLA's triumvirate is not beautiful music, but rather godawful noise. I speak of three singular personalities within UCLA's collective leadership that oversees athletics, in general, and basketball, in particular.

Two, each of UCLA's trio has job security that is independent of their ability to extend or even sustain the athletic excellence that created their exalted positions in the first place. Moreover, they have been able to subject UCLA to any number of distressing and embarrassing failures without consequence. By reinforcing each other, the three of them merely shrug off such failures and huddle ever closer together within their fox holes. In a sense, they are each inextricably tenured.

To keep their contracturally cemented jobs, it seems, they have only to stay away from felony arrests or amorous incidents involving goats. Their jobs are as close to permanent as one can get. These undislodgeable squatters are not going anywhere soon, I'm afraid. Ladies and Gentlemen, UCLA Athletics' The Three Tenures: 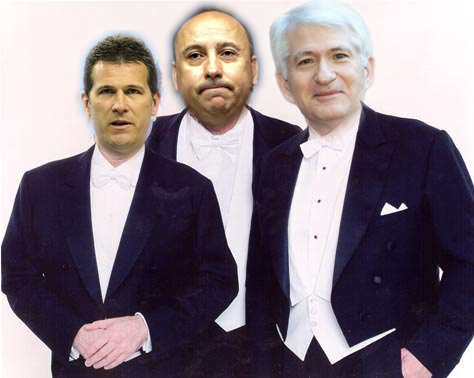 The UCLA men's basketball program was brought to historic, unprecedented heights by someone who is to many the greatest Coach of all time, in any sport. Not coincidentally, this Coach was an amazing teacher of lessons ranging far outside basketball, lessons of life, itself. And, as if all of this were not enough, in terms of virtue, principles, morality, and being true to oneself, Coach was a beautiful, exemplary human being.

For reasons understood by no one outside the walls of The Morgan Center, the position of men's head basketball coach was handed to Nosay Icareus. Handed on a silver platter, with the silver platter thrown in for good measure.

Furthermore, Icareus was given a lengthy contract, a huge salary, extravagant perks, and an enormous buy-out by an astonishingly incompetent goldbricker as his boss. This elite-pretender coach has, thereby, found himself in a win-win-win-win situation.

Despite possessing mediocre coaching skills, and despite being saddled with well-earned moral damage to his character, this Tenure was gifted the keys to college basketball's royal palace. When confronted with the profound issues that genuinely trouble good people, Nosay Icareus truly lives up to his name.

Despite having shown no special ability to pilot one of the country's premier athletic departments, this Tenure was handed the job of UCLA's Athletic Director. Quickly, Glazedbiscotti learned that the two most important functions of his new job were to affix his lips firmly and permanently to his boss's rear end, and to manage the expectations of everyone else.

Fortunate to have a boss who doesn't care much for the raison d'être of his department, this Tenure rules his fiefdom with a oaf's hands and an idiot's vision. He cagily goes about exploiting UCLA's athletic tradition to puff himself up in his boss's eyes, and to get himself rewarded with huge salaries, bonuses, and contract extensions, all for merely keeping the athletics ship on cruise control.

This Tenure saw fit to let a bunch of fashion-designing dandies replace UCLA's richly traditional and iconic football uniforms with a mocking version thereof. Using other peoples' money, of course, he paid a king's ransom to slap a glass slip-cover on an ephochal Pauley Pavilion. While echoing the tried-and-true refrain of "our hands are tied; we have a postage-stamp sized campus" to snuff out expansion of sub-par football facilities, he nonetheless stood by while his boss steamrolled forward with a frivolous expansion project that uses the same precious land.

This Tenure took the carefully built work-product of enlightened Chancellors who came before him, and promptly quit striving to maintain their legendary achievements. These earlier Chancellors had discovered that you can achieve academic and athletic excellence at the same time. They had learned that athletic excellence will bring incalculably more recognition and enduring pride and loyalty, not to mention monetary benefits, to a university than will academic excellence, alone. They had learned that, not only do athletics not clash with academia, they actually help foster academic excellence, by building the university's global reputation, and by helping to attract excellent faculty and students to its university population.

This Tenure, whose only concerns seem to be in his chosen field and the bottom line, throws new obstacles in the path of furthering UCLA's athletic excellence, for example, by making athletics compete for funding and campus real estate with, not just academia, but also with luxury and vanity.

Despite oft-repeated complaints about the difficulty of growing UCLA on a tiny campus, this Tenure somehow found the means and the will to build an unneeded luxury hotel right in the center of campus. Apparently, he never even considered an on-campus stadium that would have served hundreds of thousands of students and fans every year for years to come, in favor of a boondoggle for the benefit of an elite few.

He unloaded a garden of serenity and peaceful meditation for the crassest of reasons, its cost. With all the sensibility of a me-first Wall Street inside-trader, he made a cherished asset, whose only crime lay in not fattening the university's wallet, walk the plank. He felt, apparently, that while serenity and quiet thought perhaps cannot be bought, it sure as hell can be sold.

The Three Tenors represent a triumph of soaring melody and sublime harmony.

The Three Tenures represent a triumph of inattentive coasting and enervating stagnation. The Three Tenures are a perfect, self-sustaining, crown-jewel-raiding troika of narrow-minded short-sightedness. UCLA Athletics' The Three Tenures: The Unconcerned, overseeing The Incompetent, enabling The Vacuous.