Wow Everyone At Your Tailgate With Spicy Smoked Tri-Tip!

If you have lived in Southern California, at some point you've probably had Santa Maria-style tri-tip. Well, with no disrespect intended to the Central Coast, this tri-tip recipe is sure to have everyone at your tailgate party asking for more.

Share All sharing options for: Wow Everyone At Your Tailgate With Spicy Smoked Tri-Tip!

With a home game this Saturday, it's time to begin preparing for this weekend's tailgating festivities!

As I've previously discussed, the most important thing to consider is what your planning to cook. While the Memphis-style ribs proved absolutely delicious and certainly worthy of another go-around at some point, this week we'll be tailgating with some of my old fraternity brothers who don't normally make the trip down from NorCal, so I'm going with the most requested thing I make: tri-tip.

I teased it in one of my earlier tailgating articles, but I'm now ready to share my recipe for Spicy Smoked Tri-tip.

The thing I like most about smoking a tri-tip is its simplicity.

The most important part is finding a good piece of meat. When you purchase tri-tip at the store, there are two varieties: Trimmed and Untrimmed. For a long time, I would purchase the untrimmed ones because they were less expensive, but then, one game, the Vons where I normally buy my tri-tips was out of the untrimmed ones. So, I had to buy a trimmed one.

I always pick up a couple of packages of sourdough rolls because I like having my tri-tip on a sandwich. Don't get too many rolls though. Not everyone will opt for the sandwich and you don't want to be bring home three weeks worth of rolls.

Now, part of my preparation to make tri-tip is to cut off almost all the fat off the meat. As a result, I learned how much time buying a trimmed cut saved me. When I say that I cut off almost all the fat I really mean that. Frequently, even when you buy a trimmed cut, the butchers tend to leave a pretty thick piece of fat on the bottom of the tri-tip. That has to go too. If they didn't cut it off at the store, you should take care of cutting that off at home.

Once you have done that, it's time to liberally sprinkle the all-purpose barbecue rub we made for the Memphis ribs on top of the tri-tip and rub it into the meat. Turn it over and do it again. Mix more if you need to. I've repurposed a old, cleaned parmesan cheese shaker into a storage container/shaker for my rub. It gives me someplace to put any leftover rub for use next time.

Take the rubbed tri-tip and toss it into a zipper bag for transport to the game.

Like last time, you will also need to soak wood chips for 30 minutes to an hour. The type of wood is up to you, but, as I wrote, I prefer using apple chips. Like your meat, put them in a zipper bag to transport them to the game.

You want to light your coals and set your grill up again for indirect grilling. As a charcoal griller, I put all my lit coals on one side of my grill. The smoker box will be placed directly above the coals while my meat will go above the side without any coals.

Now, it's time for the most difficult part: the waiting. I prefer my tri-tip well done. While the guideline is to cook beef to an internal temperature of 145 degrees, I can tell you that I just time it. Without fail, an hour and a half on the grill always produces the desired doneness.

So, go enjoy the camaraderie of your fellow Bruins and forget about it for an hour and half. Don't life the lid. That just lets the heat out. Once it's done, take it off the grill and let it rest for 10-15 minutes to settle the juices before slicing it up.

What you should find is that the cayenne pepper you put into the rub will give you a late heat in your mouth. Delicious!

After making it a few times, I realized that it was so popular that I started making two for each game. To do this, just buy a second tri-tip and grill it together with your first one. They'll both finish together that way!

Now that you're ready to "Wow!" your friends this week, let's kick it to the next level!

There's Always Room for These

You may remember that I kicked off this series with an article discussing the UCLA Jell-O mold kits. Well, it's about time I take a moment to actually review the product. Having used tried them out at home a few times with regular Jell-O, the Memphis game was the first opportunity to create UCLA-shaped Jell-O shots. 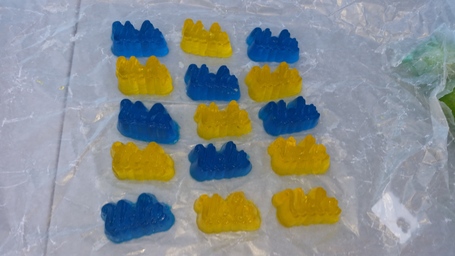 For the game, we made a bunch of lemon ones which didn't contain any alcohol for the kids and then the berry blue batch was the high-octane one. UV Blue berry-flavored vodka was the spirit of choice.

In short, they were amazing. If you were on the fence, get off and get yourself a kit today. But, watch out, with the current weather forecast Saturday is expected to be another warm afternoon. Don't leave your Jell-O jigglers out in the heat or they may start to melt. Interestingly, it was the non-alcohol ones that started to melt and the adult ones didn't. I have to guess that the presence of the vodka raised the melting point for those, but I leave that up to one of you South Campus majors.

The bottom line is that these were a big hit at our tailgate and should be at yours too.

Well, that wraps up this edition of Tailgating, UCLA-Style. What are you making at your tailgate this weekend? Let us know in the comments.