he older I've gotten the more I've found that tailgating has evolved.

As a student, it was simple: burgers and beer. But, if you're like me, tailgating at the Rose Bowl gets slightly more sophisticated every year. It could be a new recipe or maybe you've bought new equipment.

Today, we're unveiling a new series of features here at Bruins Nation. It's called Tailgating, UCLA Style. Here we will look at different things related to enhancing your tailgating experience.

To kickoff this series, we have what may be one of the most...ummm...interesting UCLA-branded items I've seen in a long time. It comes to us from Kraft, the makers of JELL-O.

The newest UCLA-branded item was just announced this week. It's the JELL-O Jigglers Mold Kit. 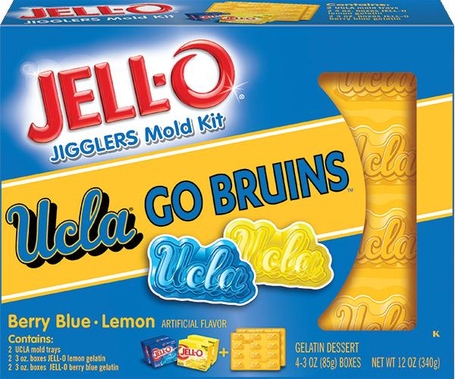 Kraft is offering this item with a wink and a nod because, let's be realistic, we all know that the first thought anyone has when they see this is UCLA script-shaped JELL-O shots. But, according to an Ad Age article, JELL-O Brand Manager Emilie Fitch says, "the Jell-O brand does not advocate [that] behavior and we don't promote recipes that use alcohol."

But, maybe that's why Fitch expressed surprise at how big a hit collegiate mold kits were when they were introduced last year with just four schools -- Arkansas, Texas, Florida and Michigan. She told AdAge, "We were shocked by how quickly they moved."

Well, college football fans everywhere are shocked it took JELL-O so long to introduce these molds. Last year, the kits were available on Amazon and at Walmart.

The UCLA mold kit is one of 16 new schools added this year including Pac-12 schools Oregon and u$c.  This year, the kits will be available at more retailers.

So, what do you think? Will you be including UCLA JELL-O and/or UCLA JELL-O shots at your next tailgate?

Let us know what you think in the comments.